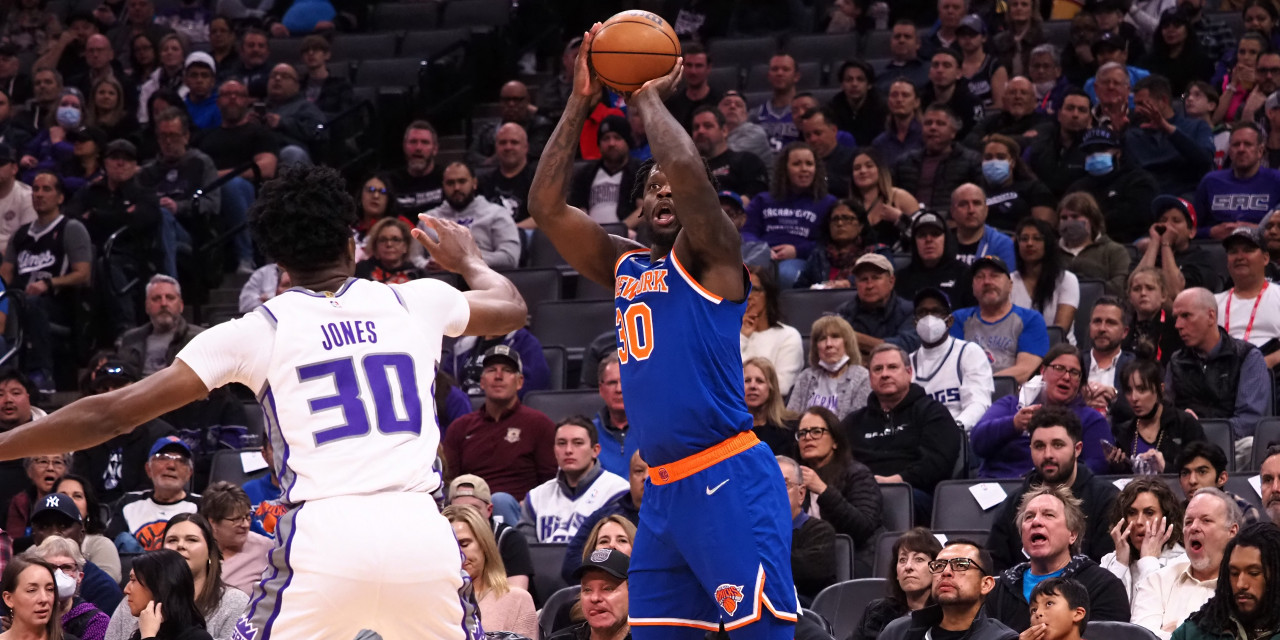 Julius Randle tallied a new career-high 46 points as the Knicks mounted a furious second-half comeback, overcoming the Kings on the road.

The New York Knicks (27-38) defeated the Sacramento Kings (24-43) in Sac-Town by a final score of 131-115. While things looked bleak for New York in the first half, the team woke up in the second, having what looked like their most dominant stretch of play all year to complete a comeback victory on the road. Behind their largest scoring half since November 18th, 1988 (83 points in the second half) and a Julius Randle masterclass, they were able to win their second straight game.

The Knicks were coming off a much-needed win in L.A. against the Clippers where their youth movement led the way to a rout. They broke a seven-game losing streak, and RJ Barrett was especially impressive with 24 points and nine boards in 33 minutes of play. He and New York would be looking to finally get some momentum going against a struggling Sacramento team.

They would have to try and figure out how to lock up known Knick-killer Domantas Sabonis, a newly acquired piece for the Kings from the Indiana Pacers. Coming into this contest, Sabonis was averaging 20 points and 10 rebounds against the ‘Bockers. Typically, Julius Randle gets the assignment against the big man, but Mitchell Robinson would get the call to try and lock him up before he got too hot, too fast.

Unfortunately for Robinson, Sabonis had his number early. He scored three times against Robinson in the paint and drew two quick fouls on the Knicks center. Their offense was stagnant and their defense was porous leading to a quick 10-point advantage for the Kings with just three minutes played in the game. It felt like all of the Knicks’ starters were forcing themselves to try and generate scoring, but nothing was working. To make matters worse, foul trouble quickly removed Barrett, Robinson, and Jericho Sims from the court. Randle seemed to be the only Knick with the ability to score, but after 12 minutes and 10 personal fouls, the Knicks were down by 16 headed into the second quarter.

New York needed to lock it down defensively in order to stop the bleeding and to try and create some offense for themselves before the first half came to a close. While they started to find some rhythm and began to score consistently, they were struggling to contain Sacramento in the paint. The speediness of the Kings and their ability to draw fouls left the Knicks a step slow more often than not, and it made it hard to come out of the hole they were in since the first quarter. One bright spot from the second was the awakening of RJ Barrett after a slow start in the first. He hit a few tough layups and a three to get the Knicks a bit closer to catching up to the Kings, and he finished up the half with 15 points and six rebounds. But, New York was still down by 15 through two.

New York opened up the third with gusto. They quickly pulled back to within 10 points of Sacramento off shots from Randle and Evan Fournier. The Knicks did have to go the rest of the game without rim protection from Robinson, who had to leave the game due to an illness. As a result of his absence, New York’s starters were playing much more aggressively against Sacramento and forced them to take tough shots. That coupled with Randle and Barrett becoming forces to be reckoned with on the scoring end of things helped the Knicks get their first lead of the night with four minutes left in the third. By the time the period wrapped up, New York had outscored Sacramento 44-24 and entered the final period of regulation time up by five.

The Knicks sought to complete their comeback against the Kings by finishing up the fourth strong, but an early injury to Cam Reddish stopped play for both teams and took him out of the game. New York was continuing to push hard on offense through Barrett and Randle, but Sacramento was hanging around to keep the score close. Randle continued to dominate, and a battle was brewing between his post game and Sabonis’ with Robinson out of the paint and unable to assist with containing him. Randle was clearly feeling much more confident in his ability to hit big-time shots, though, and he was simply unstoppable from beyond the arc or at the rack. After Sabonis was ejected from the game for a double technical, the Knicks continued to pour it on and they were able to complete the comeback.

Julius Randle was by far the most impressive performer of the night, scoring a new career-best 46 points and grabbing 10 rebounds with just one turnover. He became the first Knicks player with 45-plus points, 10-plus rebounds, and eight-plus three-pointers made in a game. RJ Barrett’s effort was almost overshadowed by Randle’s as he finished with 29 points, eight rebounds, and six assists. After a very quiet first half from Evan Fournier, he helped the Knicks score down the stretch with a few big threes and ended his night with 15 points. Alec Burks only had five points to contribute to the offensive explosion from the contest, but he did have five rebounds and four assists. Robinson only played for two minutes before leaving the game due to an illness.

Immanuel Quickley continued his impressive stretch of play as of late in this game, going for 27 points with six rebounds and four assists. Taj Gibson, who had contributed a lot of help in the absence of Robinson, grabbed eight boards and blocked three shots along with scoring five points. Jericho Sims was relatively silent this game but still managed to get four rebounds. Cam Reddish was only able to score two points before leaving the game in the fourth quarter, and Miles “Deuce” McBride also scored two with two boards.

The Knicks will continue their road trip against the Dallas Mavericks on Wednesday night. While they will no longer be dealing with Kristaps Porzingis’ threat in the paint, Luka Doncic is sure to provide a challenge as New York seeks their third straight win.