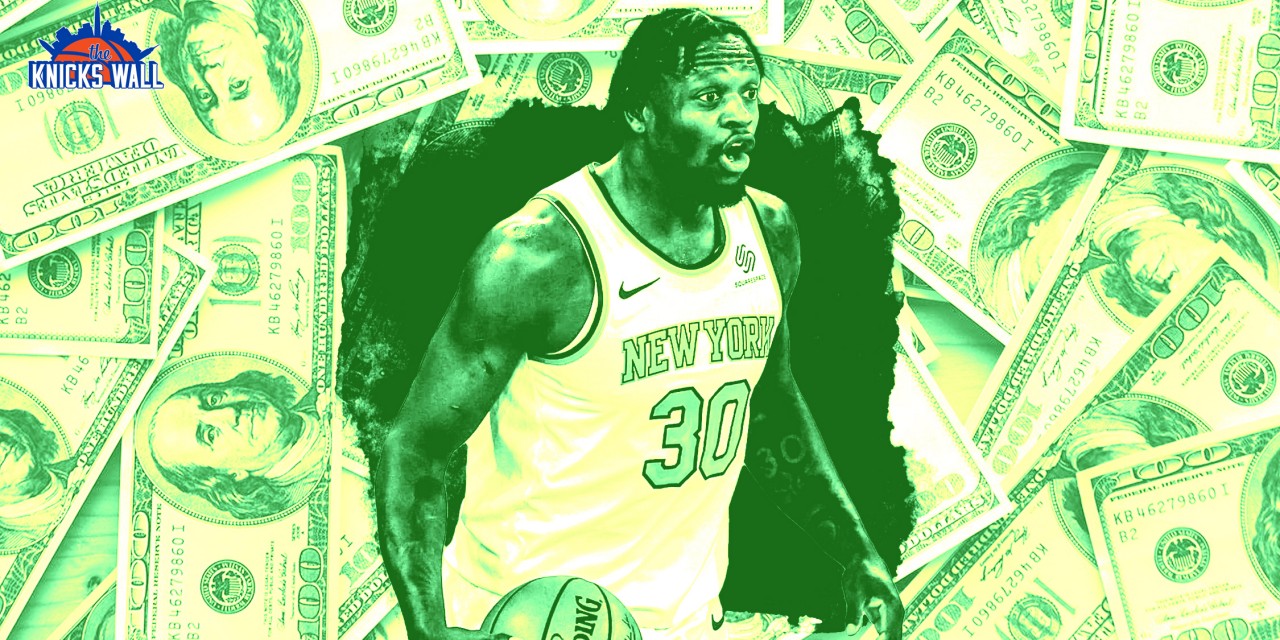 Julius Randle earned himself a big payday with his incredible play this past season. Now, it’s up to the Knicks to decide exactly how much he earned.

The offseason that looms and the one after that may be the two most important offseasons for the New York Knicks and their fans since the team “acquired” Patrick Ewing in the 1985 draft. For the first time in a decade, the city of New York has a team not just to be excited about watching, but to be excited by watching. To extend that one-year rush into a streak, a consistent vibe more akin to those possessed by the Knicks teams of yore, they must figure out what is to be done with Julius Randle. And whether he’s the future or merely a piece of it.

The latter may not be possible after this season, which is a nice problem to have if you trust Randle to turn in his own sort of streak—that is, to make his All-NBA season a possible routine, not just a flash in the pan or a nice souvenir on the team’s journey back to the pits. There’s also the matter of his torrid regular season campaign looking like an extended stroke of luck given his horrid playoff returns. Numbers like 30% shooting from the field, an effective field-goal percentage of 34.4 (which was in the 0th percentile among all power forwards), and nearly five turnovers per game won’t get you on an All-NBA team; they’ll land you on an All-What-Do-We-Do-With-Him-Now team.

But that shouldn’t be a problem. Any online chatter that Randle’s season was, indeed, bolstered by a bevy of “lucky” buckets and fortunate shot-making is coming from someone who failed to watch him play. He grew as a shooter, capable of pulling up off one dribble and in closed quarters. He led the league in minutes played (total and per game), finished second in total isolations (393, behind Russell Westbrook’s 415 but miles ahead of Damian Lillard’s 331), and was the team’s de facto floor general. His 83.6 touches per game far outpaced Derrick Rose, who was second at 58.6.

He was an offensive Swiss Army knife, leaving defenses no choice but to hitch their best off-ball chaser to his back as he hopped from the elbow to the post, then to the wing, and back again, all before dribbling into a fadeaway sinker over the outstretched arm of a Rudy Gobert or a Jimmy Butler, you take your pick. He made 160 three-pointers this season, just eight less than he had made over his previous six seasons total. Per The New York Times’ Marc Stein, he became the first player in NBA history to enter a season with a career three-point shooting percentage below 30 only to finish it at 40% or better.

That Randle was stifled so significantly in the playoffs isn’t entirely on him. If it’s on any Knick, it might be Tom Thibodeau for failing to develop new sets for the other four players he was fielding when it became clear that the Hawks wouldn’t be allowing Randle to ever create his own offense. More than anything, though, it’s a credit to Atlanta for dousing New York with Kryptonite exactly where it hurt the most—and exactly where it had hurt Atlanta during their three regular-season meetings (Randle averaged 37.3 points per game in those contests).

So, this isn’t exactly a pros and cons argument about whether Randle is worth extending. After the season he had, it’d be malpractice for the Knicks to not lock him up for the short term at the least; Randle has one year left on his contract, for which he’s due $20.7 million with a meager $4 million guaranteed that the Knicks will undoubtedly honor. It’s the not-so-great beyond that could make things a bit more debatable.

The specifics of what that extension could become get a little complicated, and it’s important to note that this is merely what the Knicks can offer, not what Randle has to—or even should—jump at. They could extend him this offseason for four years, $106 million. That’s their only financial option in the immediate future, in fact, since Randle doesn’t meet the renegotiation requirements (that would come on the third anniversary of a four-year contract, per ESPN’s Bobby Marks).

But Randle could also wait a year; he’s entering the final year of his contract and would become an unrestricted free agent in 2022. That would garner him a five-year deal for over $200 million. There’s also the possibility of a two-year max this summer, for which he’d tack $55 million on top of what he’ll already be making in 2021. That would make him an unrestricted free agent in 2024 and eligible for the super-max: it comes with five years, roughly $250 million, a personalized hovercraft, his name written on the moon via laser, and an artificial intelligence service that looks and sounds exactly like Mark Jackson. Mama, there goes that robot.

If they can, it would benefit the Knicks to sign Randle to the four-year, $106 million deal. It’s a lovely reward for a stellar season, and it would free up close to $60 million or so in cap space this offseason. While the incoming free-agent class doesn’t exactly have a Hope Diamond in its midst, the Knicks need starters at point guard, small forward, and depth at several positions. Sometimes, free agency is about finding the diamonds in the rough, those that can often help to change the course of a game (or series) for your team. Perhaps that’s Kyle Lowry or Lonzo Ball; perhaps it’s bringing back Tim Hardaway Jr. or taking a flyer on Spencer Dinwiddie, who missed all but three games this season due to a torn ACL.

What should Randle do, though? The operative word in free agency is “agency,” and if any player deserves to utilize his after this season—playoff woes notwithstanding—it’s Randle. Of course, he’ll feel the impulse to use it to bet on himself, therefore holding off a year before he’s up for the big money in the summer of ’22. But that comes with some risk: as mentioned, Randle led the league in minutes this season, and despite his early exit from the playoffs, the toll that wealth of run can take on a player is well-documented and was likely on display this season.

Jamal Murray, LeBron James, Anthony Davis, Jaylen Brown, and Kawhi Leonard are among the high-profile names to have seen extended run last season, only to miss extended time (or have their teams at a disadvantage in the playoffs) this season due to injury. They’re not exactly in positions where future contracts would be in jeopardy due to one injury; Randle very well could be. It’s uncertain, no doubt. But despite LeBron James saying he knew “exactly what would happen” when he and the NBPA agreed to play this season on an accelerated timeline, there aren’t any guarantees. Unless, of course, you work them into your contract.

In the end, this has the potential to be a significantly more difficult situation for the Knicks than for Randle. Yes, signing him feels like an inevitable progression given his success last season, and locking him in for the short-but-still-sort-of-long-term is financially beneficial, but it stands to reason that this season, if nothing else, could serve as a test run on that contract. We’ve seen Randle underwhelm before, and now that we’ve seen him overwhelm, perhaps it’s not time to split hairs and overthink.

That would be fine if there wasn’t reason to overthink. After a forgettable turn in the playoffs directly followed an unforgettable season, overthinking might even seem prudent, even cautionary. But worry about the short-term first: Randle will remain a Knick. There’s hardly a doubt about that. When the long-term deadline does inevitably roll around, it will be up to the franchise’s top brass to decipher whether he was The Man in a fleeting moment of exaltation, or if he’ll be The Man for the foreseeable future.