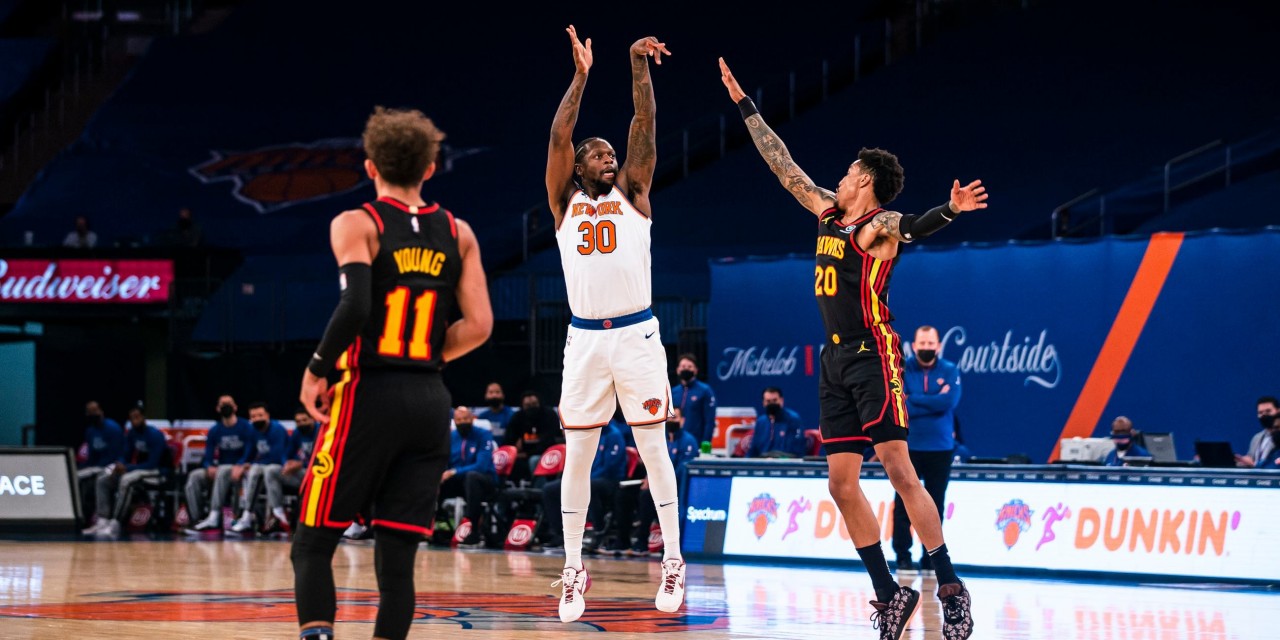 Julius Randle poured in a near career-best 44 points on Monday as the Knicks held off Trae Young and the Hawks at home for a third consecutive win.

The New York Knicks (14-15) fought hard for their victory over the Atlanta Hawks (11-16). After winning two straight games in blowout fashion, New York seemed like it was on its way to a third. The Hawks punched back, but the Knicks didn’t falter, securing a home victory that was closer than the indication of the 123-112 final score.

The Knicks got out to a big lead—11 points in fewer than four minutes to kick off the game—led by Julius Randle’s 17 first-quarter points. They scored 39 points on 68.2% field goal shooting and hit six three-pointers in eight tries. Barrett chipped in eight points without missing a field goal in the opening period.

Atlanta’s offense didn’t lag too far behind, scoring 28 in the opening period and shooting well from beyond the arc. The Knicks switched on ball screens that didn’t involve their center. For the most part, the scheme worked—Atlanta wasn’t able to find cracks in the defense to exploit. New York keeping their center in or near the paint took away the threat of a lob but opened up the middle of the floor for shots. The Hawks couldn’t hit them consistently enough to make the Knicks pay for their conservative defensive scheme.

The real exploitation came at the hands of Trae Young, who lunged into every defender that jumped his way to draw fouls. The refs took the bait and Atlanta had the bonus for nearly half of the second quarter. Young shot 10 free throws in the first half; New York took 14, with Randle leading the team with six.

Young’s free-throw shooting prowess covered up his ghastly 3-of-9 field goal shooting in the first half. Still, he powered an offensive effort that shrunk New York’s lead. The Hawks flying up the court on fast breaks and John Collins’ efficient shooting greatly helped.

Atlanta continued to ride the momentum, outscoring the Knicks in the second quarter by eight points and scoring seven unanswered points to open up the third quarter, prompting an Angry Thibs timeout in just over two minutes. New York fought back and took back the lead thanks to Randle, Barrett, and a good stretch from Elfrid Payton.

New York entered the fourth quarter with a lead, but couldn’t pull far away. Randle couldn’t be stopped as the Hawks offense kept humming. Barrett and Immanuel Quickley scored clutch buckets along with Randle to keep New York ahead until the final buzzer.

Randle led the Knicks with a season-high 44 points. Barrett recorded 21 points, six rebounds, and three assists. Quickley scored 16 points and hit four three-pointers. New York shot an even 50.0% from beyond the arc.

Randle submitted one more stellar performance before All-Star voting ends tomorrow night. He has accumulated the eighth-most votes out of Eastern Conference frontcourt players and made a case to move up in the standings with his performance of the season—44 points and nine rebounds while shooting 14-of-22 from the field, 7-of-13 from beyond the arc, and 9-for-12 from the charity stripe. It was one point off from a career-best.

He scored 17 points in the first quarter on 7-of-8 shooting, which included three triples. Even though he didn’t keep up that scorching pace, he retained his hot shooting through the rest of the contest. It took him just three quarters to set a season-high in points.

Randle’s shooting from three, in particular, was dangerous. He made a career-high seven threes, which opened up the floor for him to use the rest of his scoring bag. The All-Star hopeful simply had it going tonight, and having such a game on the eve of All-Star voting ending was perfect timing.

Following one of the best months of his career (if not the best) Barrett has gotten off to a bad start to February. His strong all-around showing tonight was much needed. Randle was terrific, but Atlanta had too many weapons for him to secure the win by himself. Barrett stepped up big time. His performance was punctuated by not one but TWO big triples that warranted “Bang!” calls from Mike Breen.

The Hawks had great success in the fast break. When they pushed the pace, they got good shots because they ran the floor with multiple players at a time. They didn’t swing the ball every time, but having options to follow shots and shoot from deep made them tougher to guard in transition.

The Knicks play with the slowest pace in the league. They generally have success getting teams to play below their usual pace, but Atlanta got them out of their comfort zone on a few occasions. The Hawks didn’t get out on the run frequently enough for it to matter.

New York’s next game is Wednesday at Orlando against the Magic at 7 p.m. ET.