Is Julius Randle the Real Cornerstone of the Knicks? 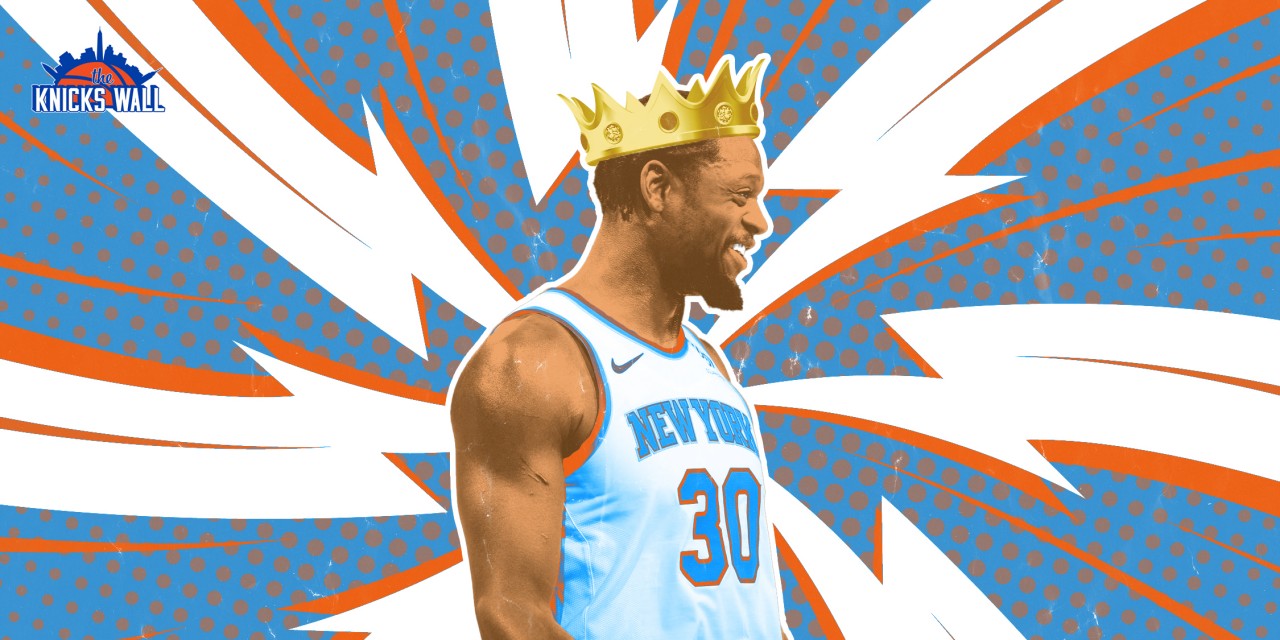 The Knicks have found the right coach for Julius Randle. He’s become the right building block, too.

“I need a coach who’s going to push me and hold me accountable,” Randle recalled telling World Wide Wes. “When Thibs got the job, I thought it was a perfect fit.”

Through 35 games, the Randle-Thibodeau pairing has been a smashing success. Considering their similar make-ups, maybe we shouldn’t be surprised.

“I craved Thibs’ coaching,” Randle told J.J. Redick. “Him pushing me, challenging me. Because I know it’s coming from a good place. We want to win. I kind of feel like we’re one in the same person. We do the same things. We like to work hard. We love the game of basketball.”

Entering Tuesday, Randle averaged 26.6 points, 11.0 rebounds, and 4.6 assists over the past nine games, shooting 52.4% from the field, 50.0% from three, and 83.3% from the free throw line. The Knicks have won seven of those games and began March with the fourth-best record in the Eastern Conference.

Julius walks into his 5th three pointer of the night as the 3rd quarter expires. 23 points for Julius. Knicks up 15. @J30_RANDLE #NBAAllStar pic.twitter.com/5wci49jMYK

He’s deserving of his first All-Star nod and is a legit contender for an All-NBA Third Team spot and the Most Improved Player award. His refined passing and playmaking have defined his improvement, so his inclusion in the Skills Challenge is fitting, too.

Great defense to get the steal, runs the break & hits Reggie for the bucket pic.twitter.com/GRQhKpfZme

Before the season, many folks (including me) wrongfully dismissed his importance on the 2020–21 squad and assumed he would continue inefficiently clogging the offense until being dealt before the March 25th deadline. Oops.

“Honestly, I just felt I kinda let the team down last year,” Randle admitted. “I felt like I didn’t have my best performance. It wasn’t because I didn’t put the work in, I just had to go through a year of growth, a year of experience of being [in] the position I was in. A lot of people may have wrote me off, a lot of people may have had their doubts … those is motivation, fuel. For me, it was just about coming back a better player and better teammate than I was last year.”

Randle draws the defense and kicks it out to Burks for three pic.twitter.com/p41j4NPTLH

The Knicks didn’t just hire the right coach to instill good habits and oversee a competitive workplace environment—they hired the perfect coach for the hard-nosed Randle, whose competitiveness became apparent to anyone who watched him carry a no. 8 Kentucky Wildcats group to the 2014 national championship game.

“Honestly, Thibs is a dog,” Randle told The New York Times’ Sopan Deb. “He’s a guy that is an extreme competitor and very aware of everything that’s going on. Takes each possession like it’s our last, and really coaches with the type of intensity and passion that you want from a coach.”

Thibodeau has unlocked a new Randle, as if he edited his skill ratings in 2K (which Thibs has only possibly heard of). At the moment, Randle is on track to become one of 10 players in NBA history to average at least 20 points, 10 rebounds, and five assists with a usage rate of 25.

SMASH THAT RT BUTTON & VOTE FOR OUR #NBAALLSTAR #JULIUSRANDLE

As The Athletic’s Mike Vorkunov noted, Randle is striving to become the only player ever not named Larry Bird to average 20/10/5 and hit 40% of threes. Like Larry Legend—and unlike 2019–20 Julius Randle—he’s been clutch, too. His presence alone has lifted the Knicks offense from potentially abysmal to average-ish.

ALL-STAR JULIUS RANDLE TIES THE GAME AND HIS FAMILY LOVES IT pic.twitter.com/m7iewBkh5J

Thibodeau has worked his customary magic on defense, and it’s rubbed off on Randle. New York has the third-best Defensive Rating in basketball, and Randle has been a contributor more than a liability. He’s fourth in defensive boards per game, and his Defensive Box Plus-Minus is the best of his career.

Any way you slice it, Randle has been a winning basketball player this season, and he’s directly made his teammates better.

Encouragingly, concerns over his fit alongside Barrett and Robinson that pervaded the 2019–20 season can be largely dispelled. Point-forward Randle and his fellow southpaw have been good enough together (1.4 Net Rating) and should continue getting plenty of opportunities to improve their effectiveness. Perhaps unsurprisingly knowing how Thibodeau operates, Julius and R.J. have been the most frequently used two-man combination in the league.

“On the first unit they’ve found some chemistry together,” Thibodeau said, via the New York Post. “They’re reading the game well, playing the game unselfishly. They’re tied together at both ends of the floor.”

In general, part of the outcry over Randle’s long-term value stemmed from the fact that, stylistically, as a one-way, 6’8″, inside-out bruiser, he didn’t seem like an ideal building-block for a modern NBA franchise. But, if he’s handling the rock, scoring at the basket, and setting up and making threes, he becomes nearly prototypical.

Now, with Randle and Thibodeau leading the Knicks towards the playoffs, Leon Rose, Wesley, and GM Scott Perry have to decide both whether to commit to Randle as a long-term centerpiece—presumably alongside Barrett, Robinson, and Immanuel Quickley—and. if so, when to do so.

Let’s presume the front office won’t deal their All-Star prior to the deadline. Randle’s value is popping, but throwing in the towel on this season would be asinine and counterproductive. To build a winning and respected culture, you have to show respect for winning. You don’t hire Thibodeau to pivot into tank mode while he’s doing his thing.

Even with a solid return package of future assets, compromising an already-celebratory campaign by trading the guy for whom fans immediately chanted “MVP” would leave a bitter taste in everybody’s mouth. The Knicks did snag Quickley at no. 25, after all.

Another reason to invest: availability. Since breaking his leg 14 minutes into his NBA debut, Julius Randle has missed 19 total games, including zero this season. Under Thibodeau, he’s played 36.5 minutes per game.

“I take pride in being durable,” Randle said. “Being available for my team every night to go out and give an all-out effort.”

Randle is making $18.9 million this season, with one year left on his deal at $19.8 million (partially guaranteed at $4 million). The Knicks could extend him this summer, for $23-24 million annually, as TKW’s Dylan Burd prognosticated. That seems fair for an All-Star in his prime.

Or, they could let Randle play out his deal, seek a trade next season (at which point his expiring contract will deplete his value), or risk losing him in unrestricted free agency next summer.

“I knew where we were starting at,” Randle told Deb. “I knew the challenge I had when I signed here. I signed here with the hopes of being here long-term. I want to be one of the guys that’s part of this team and eventually, hopefully, we are competing for championships and winning championships. That’s my dream. A picture-perfect thing for me.”

Julius Randle’s mom gave him a surprise congratulations & look how happy it made him 🙌 😢 @J30_RANDLE pic.twitter.com/2ikelPD8gK

Randle is committed to the long-haul. In theory, nobody should be untouchable, but the Knicks should similarly signal their commitment to Randle. (Obi Toppin could be the power forward to trade, but that’s for another time.)

Unless Wesley was being exceedingly polite, the organization’s willingness to consult Randle on the coaching search indicates they value him as part of their future, and that’s a good thing.

“There are prominent members of the Knicks organization that feel Randle is part of this young core that they’re trying to move forward with,” SNY’s Ian Begley reported on his podcast.

Maybe things won’t go as swimmingly for Randle and the Knicks down the stretch. Or maybe he’ll keep up the stellar play, and the Knicks will be able to package him for Bradley Beal or Star To Be Named Later.

If not, though, the Big Decision shouldn’t be whether Randle is worth retaining long-term. It should simply be a matter of “when,” not “if.” He’s earned it.

Randle is a quintessential Thibs Guy who has transformed into a modern star. As long as Thibodeau’s message still rings and he sticks around, Randle should, too.

Don’t mess up a good thing.