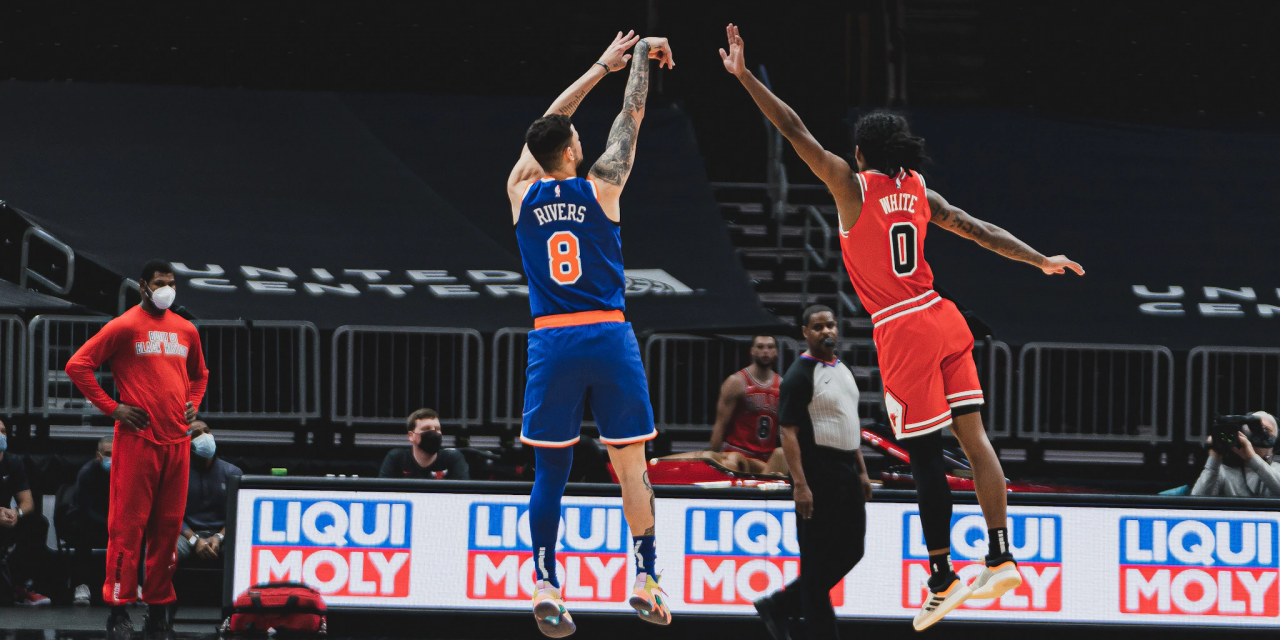 Julius Randle and Elfrid Payton helped guide the Knicks to what ended up being an insurmountable early lead over the Bulls to snap the skid.

The New York Knicks (10-13) triumphed over the Chicago Bulls (8-12) in game two of their mini-series after Chicago took the first on Monday. The Knicks’ active and engaged defense was the catalyst behind the win, considering Chicago went 6-for-36 from three, equating to a dreadful 16.7% clip.

Only two Bulls—Zach Lavine (24 points) and Thaddeus Young (19 points)—managed to put together impressive outings scoring the ball. The Knicks mucked this game up from the opening tip with their overwhelming aggressiveness and physicality in preventing scores, and this had Chicago out of rhythm for most of the 48 minutes.

Conversely, the Knicks were prosperous from three-point range, drilling half of their 22 combined attempts. Six Knicks got in on the fun and sank at least one triple—encouraging collective production that Knicks faithful should hope will replicate itself in the future.

Julius Randle had it going from the outside

Randle is the straw that stirs the drink for New York on the offensive end, functioning as a primary scoring and facilitating option for the Knicks. Playmaking-wise, Randle was his usual, fabulous self, as he patiently found open teammates time and time again once double teams headed his way. Where Randle truly stood out in this one was his ability to knock down perimeter jumpers.

Julius walks into his 5th three pointer of the night as the 3rd quarter expires. 23 points for Julius. Knicks up 15. @J30_RANDLE #NBAAllStar pic.twitter.com/5wci49jMYK

Randle is a bruising interior scorer first and foremost, but tonight he flashed an underrated and forgotten aspect of his game—his outside shot. The Bulls’ frontcourt players gave Randle room to fire all night long to not get blown by off the dribble, and Randle exploited this defensive gameplan. He was as confident and effective in his faceup game as he has been all season, sinking numerous mid-rangers off the bounce. Randle’s capability to create out of isolation, either for himself or his teammates, is invaluable.

Additionally, Randle was a flamethrower from deep, particularly in the first quarter, when he nailed three consecutive treys in a matter of minutes. Randle finished with five made threes, which came mostly from catch-and-shoot opportunities; he’s not one to fire long-range shots off the dribble all too often, but Randle is a capable threat off the catch, as evidenced by his career-high three-point percentage. Randle has had an up-and-down season shooting from the outside, but tonight’s display was one of his best in this regard. Let’s hope that Randle’s standout performance is a harbinger of future success from the perimeter.

Payton is a controversial figure among New York Knicks faithful. Many would fancy seeing him benched in place of Immanuel Quickley, mainly due to his inability to score from outside the paint. But while his bag of tricks may be limited, fans cannot ignore Patyon’s dribble-drive chops nor his rebounding prowess for a player of his stature. Both of these traits of his impacted the game in a significant way.

Elfrid Payton has been in his bag tonight pic.twitter.com/8wIhD84bzX

New York got off to a promising start scoring the ball from the paint—their first 18 points of the night came therein. Payton accounted for the lion’s share of these opening points, as he utilized his quickness to weave his way through the sloven Bulls defense for easy scores inside. Not to mention he snatched down a whopping seven rebounds in just the first quarter alone, an otherworldly number for a floor general. Payton got off to a sizzling start, but what matters is that he made his presence felt in every quarter, not just one.

After scoring 10 points with quarter one in the books, he contributed 10 more across the final three periods, relentlessly putting pressure on the opposition with dribble penetration. Payton’s box score consisted of 20 points, eight rebounds, and four assists when all was said and done. It was an all-around performance for the veteran and one that may have head coach Tom Thibodeau thinking twice about kicking him out of the starting five in favor of Quickley.

The Knicks have two games off before rematching with the Portland Trail Blazers on Saturday at home.