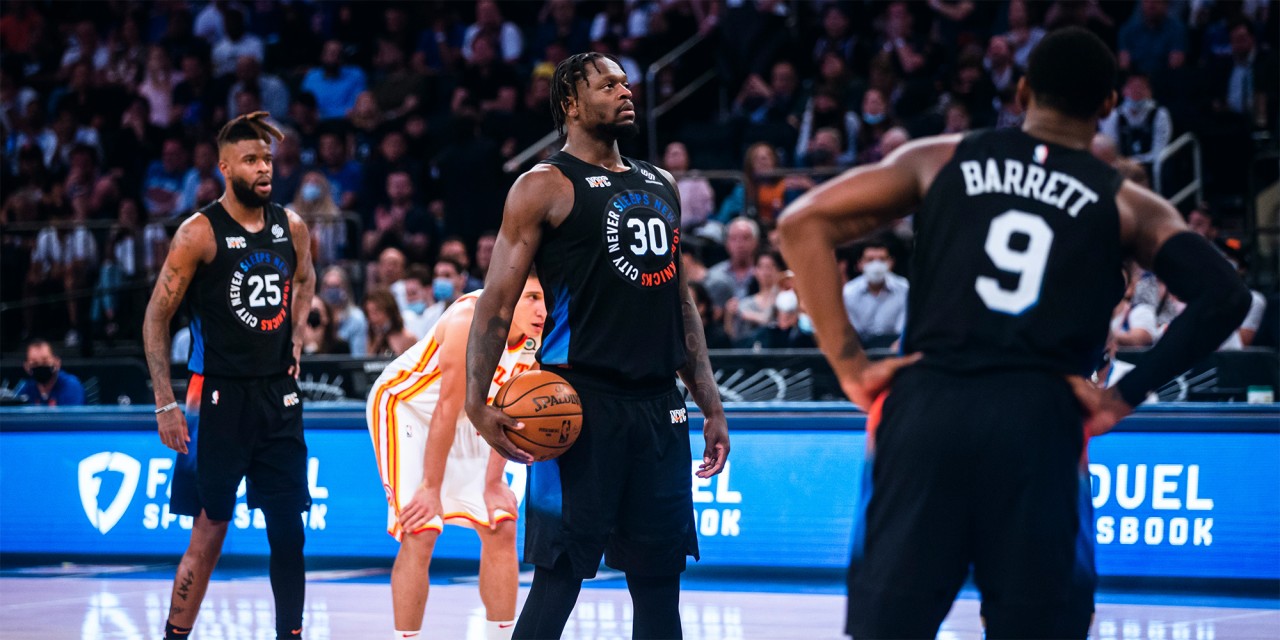 Julius Randle overcame early struggles akin to game 1 as the Knicks took down the Hawks to tie the series at 1-1.

NEW YORK, NY — After struggling heavily in the New York Knicks’ Game 1 loss to the Atlanta Hawks on Sunday, Julius Randle had a lot of work to do to get back to the player that just won the Most Improved Player award, earned his first career All-Star berth, and guided the Knicks to the playoffs this year.

Saying that he would “come back ready next game” after a disgruntled performance in which he shot just 6-of-23 from the field, Randle still found difficulty early in Wednesday night’s contest.

In the first half, Randle only scored two points on 0-for-6 shooting from the field and was-17 in his 18 minutes on the court. He was a frequent victim of double teams and had trouble passing out to teammates or driving to the basket. His two points were only via a pair of free throws attempted in the half.

Everything changed in the second half, though, as Randle immediately set the tone with a three-pointer to start the third quarter.

“We came out in the third quarter, we couldn’t go down 0-2 on our own court,” said Randle about what changed at halftime. “Our intensity just went up to another level. … When we’re able to get stops, we play with a better pace on the offensive end.”

That was exactly the case for the Knicks as they outscored the Hawks 32-18 in the third quarter, and Randle was responsible for scoring 11 of those points. For the entire second half, Randle played at a +20 while scoring 13 points to go along with five rebounds and three assists. And, of course, the Knicks went on to win the game 101-92 to even the series at one game apiece, heading back to Atlanta for Game 3.

He did a much better job of reading those double teams in the second half, finding the open teammate, and not forcing a shot. Take the possession below, where Randle drives the lane against Bogdan Bogdanovic. Clint Capela comes over to double, and Randle finds Taj Gibson open under the basket for the easy slam.

“There’s constant communication on the court,” said Randle when asked about how the veterans like Gibson help him on the floor. “Telling them what I see and telling me what they see. I talk to [Knicks head coach Tom Thibodeau] after the games. There are always going to be adjustments.”

Thibodeau noticed the turnaround from Randle and noted how he has prepared all season to be ready for defenses to focus on him like this.

“As the game went on, he started to see things better,” said Thibodeau on Randle’s second-half switch. “As is the case with Julius, each game he’ll get better. He’s seen all these defenses before, just has to be patient, keep moving, make the right plays, make the right reads.”

Even outside of scoring, Julius Randle has maintained his all-around game. He’s pulled down 12 rebounds in each game so far this series to go along with four assists per game. The rebound numbers are higher than his regular-season average of 10.2, while the assist number is a bit lower than his average of six per game.

Either way, now that the Knicks can breathe a little with the series tied at one game apiece, hopefully Randle’s game will just continue to round into form here in the playoffs. They’ll certainly need it as they head to Atlanta.

“Julius is not gonna go away, he’ll keep coming,” said Thibodeau. “He’s got great will, great determination and he’s a player.”