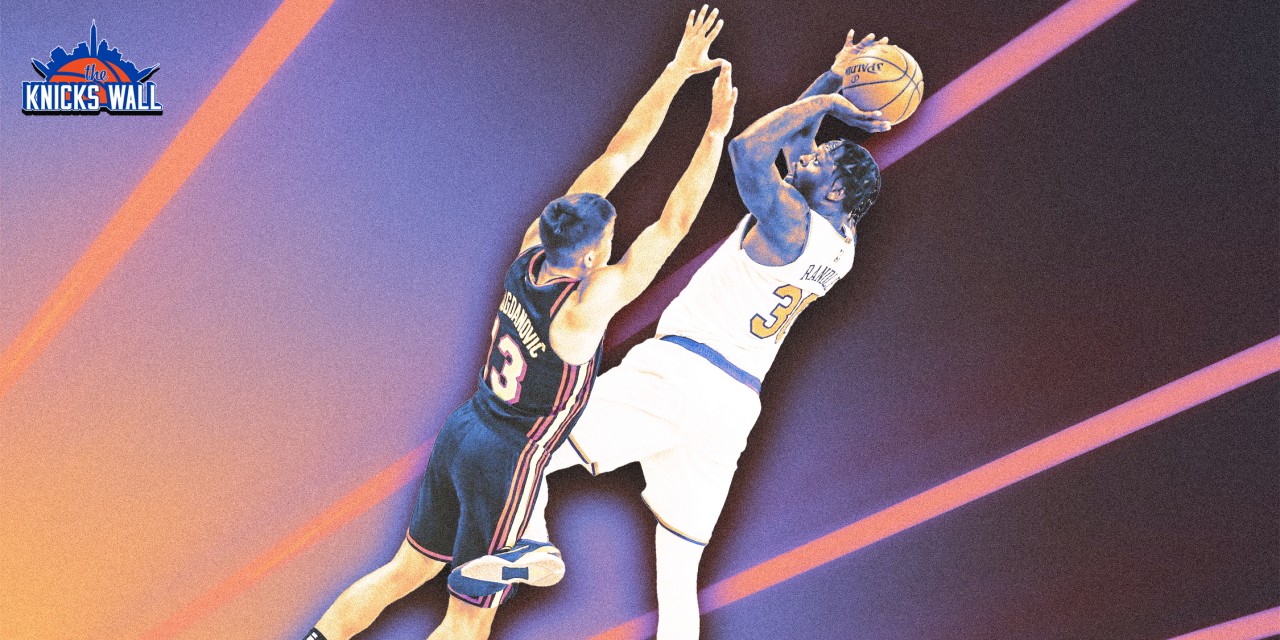 Julius Randle picked up a slow start to his first time in the NBA playoffs by the second half of the Game 2 win. The Knicks could go as far as Randle takes them.

After seven NBA seasons, Julius Randle finally had his first taste of the postseason. Unfortunately, it apparently didn’t sit well with him, as he ended up throwing up all over himself to the tune of 15 points on 23 attempts in the first playoff game of his career. In the end, the New York Knicks fell short in the franchise’s first playoff appearance in eight years to the Atlanta Hawks and a Trae Young jumper 107-105 last Sunday.

None of the current Knicks had ever heard Madison Square Garden get as loud as it did, the entire offense was out of rhythm, it probably just looked worse for Randle because so much of the offense has to run through him.

“Listen, I’m not making no excuses,” Randle told reporters after the loss. “I’ve got to be better and I will be better. I’ll just leave it at that.”

And he was better, though not immediately.

For the first half of Wednesday’s Game 2, the NBA’s newly crowned Most Improved Player looked a lot like his old self. The Knicks were down 13 as they went to the locker room, and Randle had just two points on a pair of free throws, having gone 0-for-6 from the field. The wheels inside his mind were visibly turning every time he touched the ball, as there’d be a moment’s hesitation before every decision he made.

Atlanta’s game plan was obvious, don’t let Randle drive and be ready to double. Clint Capela, in particular, made a point to wall Randle off from the rim, and visions of 2019–20 flashed before the eyes of Knicks fans as Randle would drive, jump, and then either panic or freeze.

Atlanta left Randle to take his fading mid-range jump shots, and shots that had been falling all season were now clanging out, while every pass to the open man felt like it came a second too late, allowing Atlanta to close out.

Staring at an 0-2 deficit with a trip down south to Atlanta for Game 3, MSG Network’s Rebecca Haarlow quizzed assistant coach Kenny Payne—who also coached Randle when he was at Kentucky—about the forward’s struggles just before the third quarter began, “They’re gearing their whole defensive scheme around him,” said Payne. “He has to be a facilitator, he has to get out in transition, he has to offensive rebound the ball.”

First possession of the third quarter, Randle sets a pick for Derrick Rose (starting the second half, in place of Elfrid Payton) who finds Julius on the wing for three. Not what Payne had been preaching, but Randle has his first made field goal of the night. Looking to build, he brings the ball up following a steal by Taj Gibson, promptly steps on Gibson’s foot, and turns it over in what feels like a perfect encapsulation of his performance thus far.

It’s not until about halfway through the third quarter that Randle actually got going, but gratefully he did. After Capela blocked a floater from Rose, a fortuitous bounce brought it right to Julius in almost the exact same spot as his previous three and BANG!

From there, things began to click, and Randle suddenly looked more confident. His next three touches ended in drives directly at Capela—one resulted in a foul, the second in a bucket, and on the third one he found Rose for three.

That was the Randle we’ve seen all year; the Most Improved Player of The Year and likely All-NBA forward. The guy, the Knicks, will need if they have any hope of winning this series. Just a few minutes earlier he drove, froze, and tentatively passed it out, but after that second three-pointer, he looked decisive again.

“I just tried to make adjustments, tried to get in the paint … I feel like I figured it out a little bit, but I still got to be a lot better,” Randle said, per the New York Post. “Obviously throughout the game there’s gonna be frustrations, but who we are as a team, we’re never gonna doubt whether we can win a game or not.”

There may not have been any doubt, but there certainly were nerves at play early in the series. On Tuesday, shortly after receiving his MIP trophy from his four-year-old son, Kyden, Randle appeared on Inside the NBA and told the crew that his, “Adrenaline was going, I was hyped,” he said. Adding that by the second half he felt like he had crashed.

Perhaps it took six-and-a-half quarters to shake those nerves, and for the rest of the playoffs, Randle will look like the player we saw all season long, giving Atlanta even more of a reason to skew their entire defense towards him. If anything, the Hawks are liable to double down, doubling him even more and clogging the paint with as many bodies as possible—a simple task when neither Nerlens Noel nor Gibson can drag Atlanta’s big men away from the rim.

Randle’s used to operating like this, but with so much on his shoulders, why not try to make things a bit easier, why not try something new, something that fans have been waiting to see for at least the last couple of weeks: a Randle–Obi Toppin frontcourt. The two have played fewer than seven minutes together all season, per NBA Stats, but the offensive potential is alluring. Force the Hawks to either leave Toppin open or give Randle an easier path to the hoop.

While the defensive implications are enough to give Knicks head coach Tom Thibodeau nightmares, should Randle struggle early on in Game 3, then the potential offensive spark could be worth the defensive cost. Don’t trot it out in crunch time, but Noel may still be nursing a sprained ankle Friday, and Gibson is 36 years old.

Thus far, the Knicks have made Atlanta play their game, allowing 107 and 92 points in Games 1 and 2, respectively, well below Atlanta’s regular-season average of 113.7—which is easier to do on your home floor with 16,000 maniacs screaming for you.

And while I’m already laughing knowing that we’ll still be hearing “F–k Trae Young” even in Georgia, I suspect there will be runs where the Knicks’ only chance will be to score with them. For everything that Noel and Gibson bring, will the Knicks be able to keep up while playing them as Trae catches fire? Maybe, but regardless of who else is out there, games one and two have proven (if the entire season hadn’t already) that the playoff hopes of the Knicks rest fully in Julius Randle’s hands.