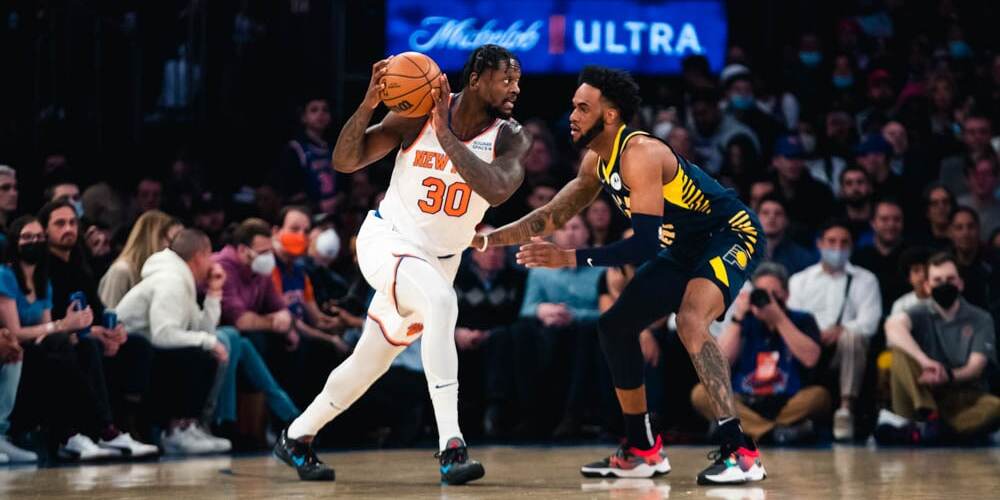 The short health and safety break had no ill effects on Julius Randle, as the Knicks’ star player had a solid all-around game back in action against the Pacers.

NEW YORK, N.Y. — On a night where RJ Barrett led the Knicks with a team-high 32 points, Julius Randle showed a bit of everything in the team’s 104-94 home win over the Indiana Pacers tonight.

Randle finished the night with 30 points on 12-for-20 shooting from the field to go along with 16 rebounds and four assists. He also played 38 minutes, showing no signs of slowing down or loss of conditioning after his week without gameplay.

We have not seen nearly enough Lucky Lefty connections this season pic.twitter.com/fC7n3OOIR8

“For Julius to do what he did today is just remarkable,” said head coach Tom Thibodeau after the game. “To come off health and safety protocols, travel and play. We had no idea what he was gonna be like. Unbelievable effort.”

He went on about their conversation leading up to today’s contest, saying, “When I talked to him last night, he told me how great he felt. I was like ‘OK, that’s good news’ … It was one of the best late-night calls I ever got.”

Randle was not a guarantee to play in tonight’s game, either, as Thibodeau clarified in pregame comments that he would warm up with the opportunity to play if he seemed game-ready. With him, Mitchell Robinson and Jericho Sims available to play tonight, there were finally no Knicks out of action due to health and safety protocols. Nerlens Noel was taken off protocols, as well, but held out for conditioning.

The Knicks’ struggles without Randle in the last two games were mightily apparent, and each in different categories. Against the Oklahoma City Thunder, the team couldn’t surpass 80 points and had just 12 assists with no player getting more than three. They then had a tough time rebounding in their loss to the Toronto Raptors, with no player pulling down more than seven. The team certainly missed his 10 rebounds and five assists averaged per game this season.

“I like the versatility because we have Alec [Burks], we have Deuce [McBride], we’ve got [Immanuel] Quickley,” said Thibodeau before tonight’s game. “You’re always looking to add people and playmaking. Julius gives us a different dimension because he can handle the ball as well. So whatever we have, that’s what we’ve got to take advantage of.”

Turnovers have been an area of concern for Randle lately, but he did a great job of minimizing them and creating open looks for his teammates tonight. After committing two early turnovers in the first couple minutes of play, he finished the game with just three to go against four assists. This also came on a night where the Knicks shot 6-for-28 from three-point range, leaving at least a couple more assists on the shelf.

Randle was highly efficient on the night and performed well in the clutch during the second half after the game was tied at halftime. He scored 19 of his 30 points in the second half, hitting seven of his 11 shots and pulling down nine rebounds. He recorded his only steal of the night with 44 seconds remaining in the game, basically icing the game for the Knicks.

To whoever gave Julius Randle a senzu bean, thank you. pic.twitter.com/wrqHmiNUQZ

“You saw how many rebounds he had and just his intensity, and obviously his form,” said Barrett on Randle’s performance. “He adds just another dimension to this team that we definitely need.”

The Knicks will play their next game Thursday night against the Boston Celtics, another contest at home in the Garden. Although he didn’t speak to the media after the game, Randle will look to continue this brand of play and build back up to his All-NBA Second Team reputation from last season.

»READ: Shuffling the roster: could the Knicks look to sell off current players