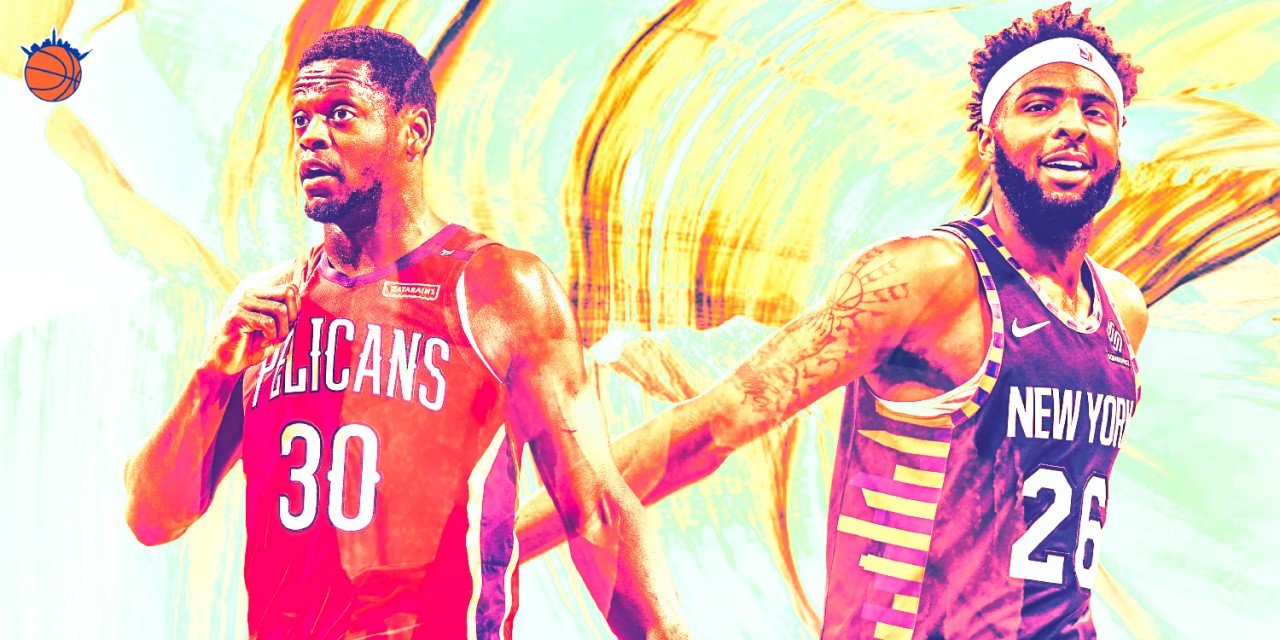 The Knicks’ key signing during free agency was not Kevin Durant, as fans hoped, but the more low-key acquisition of power forward Julius Randle.

Despite adding another under-25-year-old talent to the team, the young core has been called into question. Like the release of Yandhi, this Knicks team’s future is uncertain. R.J. Barrett could have the rookie season like his first two Summer League games or his last three; Dennis Smith Jr. could takes the leap to stardom; and Frank Ntilikina plays league-average offense to become an NBA rotation player—yet like Kanye going on daytime television, there’s a good chance it won’t end well.

After this offseason, the Knicks can at least say they have one proven talent in that core with Julius Randle.

As highlighted in Eli Cohen’s piece about the big man rotation, the starting—and most dangerous—frontcourt pairing will most likely be Randle and Mitchell Robinson. Barring any major developments, these two should be the Knicks’ two best players next season. Could the pairing of a rim-running/blocking-maestro at the 5 and a possession-stopping bully at the 4 work?

This pairing can prosper if they work together to get the best out of each other’s talents; they can cover each other’s weaknesses and enhance their strengths.

Maximizing Mitch As A Scorer

The few (only?) bright spots of last season was the emergence of second-round draft pick, Mitchell Robinson. While fans loved watching him dominate on the defensive end, his offensive game appeared limited. He never scored more than 20 points in a single game and only averaged 7.3 points per game for the season. This was not due to lack of talent on that end but rather the lack of opportunity to flourish.

One of the Knicks’ many flaws last season was a lack of passing. The Knicks averaged 20.1 assists per game, dead last in the league. Adding Barrett and Julius Randle, both above-average passers for their respective positions, while replacing Mudiay with a more seasoned Smith Jr. and Elfrid Payton, should drastically change that.

How many times did Robinson wave his hands up wide open under the rim only to be looked off so someone else can take a contested two?

Maybe it’s not about Robinson changing his game but about his teammates changing their approach to search for him more.

Both Robinson and Randle were in the top 20 in points per possession as roll men out of pick-and-rolls. Robinson was the fourth most efficient scorer out of the most important play in the NBA yet his usage was only 11.9%—one of the lowest in the league. The Louisiana native was also fourth in the entire league in True Shooting Percentage out of players who appeared in greater than 20 games. He was simply not getting the ball enough.

Randle can change that. Although Randle has the reputation of a ball-stopper, he is a gifted passer that can even run the offense. He had an assist rate of 15.5%, which ranks in the 86th percentile for bigs and averaged 3.5 assists last year as a starter. No matter the situation, he can send a clear pass.

The former lottery pick is an offense all on his own. Last season, Randle was assisted on only 54% of his shots—good for the 94th percentile for bigs, according to Cleaning the Glass. As of now, Randle is probably the only offensive weapon on the roster that will make opposing defenses sweat.

Randle taking advantage of the gravity his scoring reputation will bring and being more willing to throw a quick pass could open up both of the big men’s games. As MitchRob starts destroying rims on a daily basis, Randle will have more room to work, since the center’s defensive assignment will be afraid to leave him unguarded.

Whose man is going to help when Randle plows through or crosses up his main defender?

Here Randle scores on two All-Defensive talents. Picture Robinson running to the rim while Gasol goes to block. Julius has the passing instincts and skills, but will he gladly share the rock?

Last season, Jahlil Okafor went on the best tear of his career just from the space he was given due to his man neglecting him to help on Randle. Imagine how much that freedom will help the man who can do this:

One glaring problem for this upcoming season is overcrowding the paint. Four out of the five projected starters (Smith, Robinson, Randle, and Barrett) are at their best when attacking the rim.

Luckily, Randle has drastically improved his three-point shooting. Last year, he shot 34% from three, around league average for his position, according to Cleaning the Glass. He increased his shot attempts and percentage from the year before when he was his shooting sub-30 on less than one shot per game.

It’s logical to think that he will continue to improve, since that was his first season shooting with real volume. Randle’s developing all-around shooting will force defenses to respect his shot, allowing for more room for teammates to drive.

A lineup of Dotson, Ellington/Bullock, Knox, Randle, and Robinson could be potent offensively, too. There would be excellent spacing and mismatches across the board—and New York wouldn’t suffer from lack of playmaking, as Julius already has experience generating offense from the forward position. The third-most used lineup for the Pelicans with Randle on the floor had him as point forward running the show with no true point guards in the lineup; during crunch time, he was often the man with the ball in his hands.

Even with minor spacing, he often scored with ease:

Surrounding Randle with shooters and Jrue Holiday kept the Pelicans above-average offensively and fourth in points per game even with all the Anthony Davis drama last season.

Randle is BAD at defense. Opposing centers and power forwards would push him around down low and score at will. One upside is that his biggest lapses came when he was playing at the 5, which he will rarely do this upcoming season with Bobby Portis, Taj Gibson, and Robinson all in front of him for center minutes.

Robinson’s amazing rookie season was due not just to his ability to block shots from all over the court, but also to cover up for the other Knicks defenders. Robinson’s instincts and reaction time for opposing offenses were the main thing keeping the ‘Bockers from being the worst team in the league offensively and defensively.

Having Randle stick to whoever the bigger threat is from outside, while keeping Robinson closer to the rim, could lessen Randle’s weakest spot while ensuring Robinson is located where he is at his best. Nothing can completely erase Randle’s defensive shortcomings, but playing with an elite shot blocker can lessen his negative impact on that end.

Board Men Gets Paid

These two will terrorize other team’s big men on the boards.

One because of his strength and hustle when it comes to scraping for a loose ball.

And the other for his mindmeld connection with the ball and length to snag it down.

Randle never averaged less than eight boards per game despite being undersized. Robinson was ninth in the league at collecting contested rebounds last year, for those who averaged five or more boards per game, and gathered 13.1% of his teammates’ misses, good for 91st percentile as a big. He was just a rookie!

These two may not set the world on fire immediately, but with steady progression and a little adjustment in play styles, they can bring out the best of each other to augment what they both already deliver each night.

While it’s unsure how great exactly this young core can become, thanks to one good signing in free agency and an excellent draft pick, the Knicks at least have a great pairing that could potentially be the next exciting frontcourt.