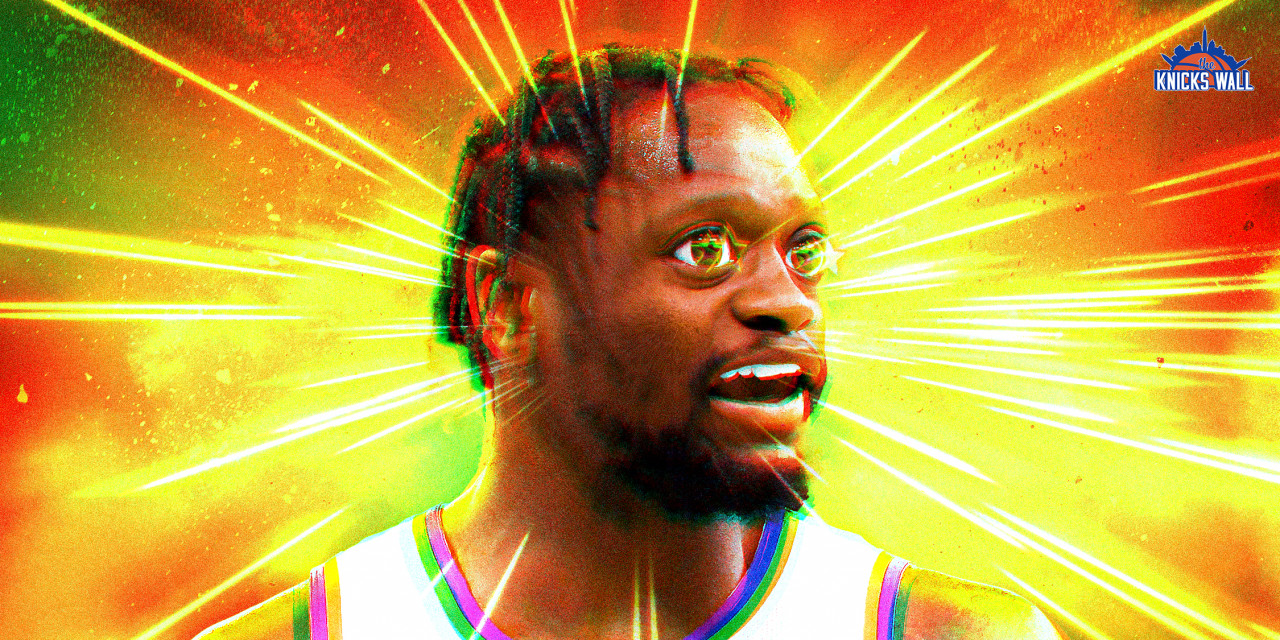 An All-Star a year ago, Julius Randle still leads the Knicks in nearly every top-line statistical category. He’s taken a step back, though.

The 2021–22 season has been a humbling experience for the New York Knicks. Once considered an improved basketball team from the year prior after adding guards Kemba Walker and Evan Fournier in free agency, New York has proven to be anything but. Forty-eight games in, at 23-25—a record good for 11th in the East—the ‘Bockers are in danger of missing not only the playoffs but the postseason entirely.

Several reasons stand out for why the Knicks are floundering. Their three-point defense has fallen off a cliff (23rd in opponent threes made), Coach Tom Thibodeau’s rotations have been questionable at best, and the newly signed backcourt of Walker and Fournier has given them sporadic production. But while these storylines have all come back to bite the ‘Bockers at different times throughout the calendar, none have caught as many headlines as Julius Randle’s underwhelming play.

The new year has been particularly unkind to Randle. He is averaging just 16.0 points on a miserable 39.8% from the field and 25.8% from three in January. Moreover, Randle is not far removed from perhaps the worst performance of his Knicks career against the Pelicans on Thursday, in which he scored just four points on 1-for-9 shooting from the field. He even drew boos from the Garden crowd following an ugly turnover late in the third quarter, and after the loss, declined to speak to the media for the eighth consecutive game, later fined by the NBA.

With all that in mind, let’s plunge into an area of Randle’s repertoire where he’s remained a steady contributor, areas he’s taken a step back in compared to 2020–21, and lastly, whether he merits consideration for a second consecutive All-Star Game appearance or not.

When a team isn’t playing up to par, fans and media tend to look for a scapegoat. And as the engine that drives New York, Randle has been that problem child. But there’s an argument to be made that the criticism directed towards him has been too harsh. While frustratingly inconsistent in some ways (more on this later), Randle’s steady hand in generating scoring opportunities for his teammates has been critical to the Knicks remaining competitive.

Julius Randle is a first-rate facilitating big. Cleaning the Glass’ assist percentage stat is an accurate measurement of a player’s passing chops, as it calculates what portion of their teammates’ makes they assist on. Randle’s percentage is 24.7%, which puts him in esteemed company for his position. The only classified bigs with a higher assist percentage at the moment are LeBron James, Giannis Antetokounmpo, Draymond Green, and Nikola Jokic. Four future Hall of Famers.

What a pass from Randle. Mitch is eating. pic.twitter.com/4j6LStL2lD

Randle doesn’t stack up with the likes of those assist men, mainly because of his persistent issues passing out of double-teams. But to be grouped with a quartet of revolutionary dime-droppers is a credit to how much Randle’s playmaking means to New York. It’s a small sample size, but in the two games he’s been out this season, New York’s attack became lifeless and bogged down, as evidenced by a bottom-three team total of 87 points against the Raptors back in December (the Knicks matched that and came in with 75 points both in January). More so than any Knick—and almost any player in the NBA—Randle can assert his will offensively without scoring. So try not to get too caught up in his point totals because the Knicks are better off with him out there whether he’s dropped two or 22.

The ugly: mid-range and three-point shooting

Last season, Randle’s bread-and-butter scoring method was the mid-range fadeaway. It’s an almost impossible shot to contest/block, thanks to Randle’s height, smooth handle (which helps him create separation), and the fact that he literally fades away from the defense. Randle shot 43% from the mid-range in 2020–21, a mark good for the 58th percentile among all bigs. This efficiency came on an almost unmatched usage rate to boot (96th percentile in mid-range frequency). Fast forward to the current day, and while Randle still loves the in-between game (82nd percentile in frequency), he is no longer seeing the fruits of his labor.

In hindsight, Randle’s mid-range efficiency taking a dip this season should have been expected. Maintaining above-average accuracy with his heavy workload was always going to be a tall task. But his in-between proficiency hasn’t merely dropped—it has plummeted. On the season, Randle is making just 36% of his mid-range tries (35th percentile), his lowest mark since the 2017–18 campaign, when he was a Laker.

Unfortunately, Randle’s mid-range woes have carried over to beyond the arc. One year ago, Randle was a three-point marksman, as his 41% clip from distance fell in the 91st percentile among bigs. It was his best long-range shooting season to date and one that sparked hope in the notion that he finally had a reliable three-point shot. But those hopes have been dashed.

One could argue that Randle’s struggling even more from three than the mid-range, which says a lot. His current three-point percentage (31%) is down 10% from the prior year and in the 40th percentile.

The added attention that Randle is receiving from defenses compared to years past may be playing a part in his poor shooting splits. According to NBA.com, Randle gets double-teamed on 13.2 possessions per game, the 20th-most in the league. Additionally, 47.2% of his field-goal attempts have come from when a defender is either tightly or very tightly guarding him, per NBA.com. With a season-and-a-half sample size of Randle as a legitimate star, opponents are beginning to figure out chinks in his armor and exploiting them. For example, teams love to throw multiple bodies at Randle and attempt to make him uncomfortable because of his long-standing issues operating out of double-teams.

Ultimately, Julius Randle is a fringe All-Star. Yes, his offensive production is far from what it was a year ago, but he’s still leading the Knicks in points, rebounds, and assists. There are very few players that contribute in more forms than Randle, and for this reason, it wouldn’t be surprising to see him voted in as a reserve.