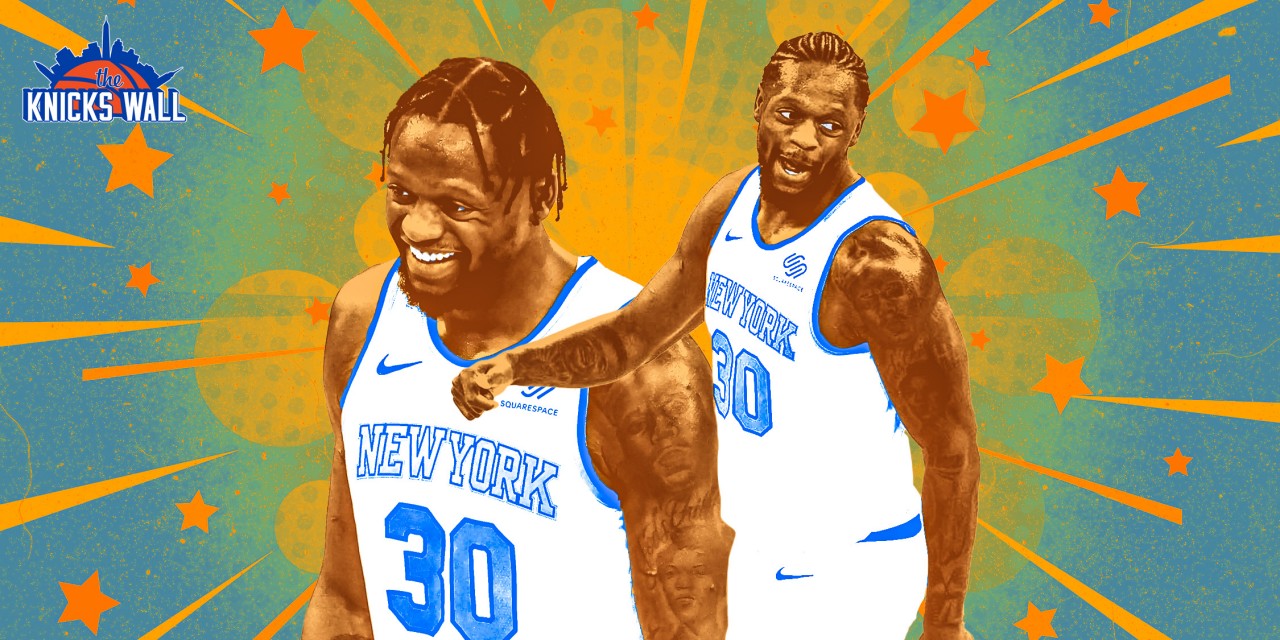 Entering the 2020–21 NBA season as an afterthought, the Knicks were viewed as a team in transition. Thanks to the emergence of Julius Randle, New York seems to be moving in the right direction.

The phrase “hindsight is 20-20” is often written or uttered before someone admits they were wrong. In January, I wrote about Julius Randle’s value, assessing him from an asset point of view. Before the Knicks took off and evolved into an Eastern Conference threat, they were a team teetering between the playoffs and ping-pong balls. The conversation around Randle, who led the league in minutes at that time, was whether New York should keep or flip their asset.

Fast forward three months later, and the former University of Kentucky forward has emerged as a force. Randle still leads the league in minutes, a blistering 37.5 minutes per game, but he’s also averaging 23.9 points, 10.4 rebounds, and 6.0 assists per night. He’s netted his first-ever All-Star appearance in February, is the front-runner to win the Most Improved Player award, and New York now sits fourth in the Eastern Conference, looking primed to dodge the play-in tournament.

Just an absolute gargantuan effort for a player who battled through trade rumors throughout his first season and watched New York select Obi Toppin, a player at his position, with the eighth overall pick in the NBA Draft. Randle appears to be a keeper and a key player to revitalize a franchise that has missed the playoffs in each of the last eight seasons.

But how did Randle do it? Where has Randle improved his game?

Adding an outside game to an inside force

It starts with his outside shooting. In past seasons, opposing defenses welcomed Randle to shoot threes. Even as he began to take a step forward as a shooter in New Orleans, teams saw that as a victory over a Jrue Holiday or Anthony Davis-led attack. Not only that, but Randle never took a high proportion of his shots from behind the arc, just 2.7 per game during his “breakthrough” season in New Orleans on 34.4% from that outside.

This season, with the offense running through him, Randle has been able to let them fly to the tune of 5.3 per game, and he’s a legitimate threat. In the below video, Fred VanVleet is so scared of Randle’s shot he’s close enough to commit a three-point foul.

In previous years, Randle would’ve seen the smaller VanVleet and attempted to bully him into the post. In some cases, it would work, but it would also show him passing up on a good shot for a worse shot. Now, Randle is much more comfortable hunting and launching for threes. His 42% from three when using Cleaning the Glass’ garbage time metric is in the top-eighth percentile among all big men, just above Maxi Kleber and Danilo Gallinari.

As the kids would say: “sheesh.”

Reviving his creation game; Randle becomes the “point-forward” for the Knicks.

Thanks to a now-respected outside game, Randle is capable of opening up other areas of his game. Along with that shooting, we’ve seen him assume a large role and elevate as a creator into a true playmaker for the Knicks. Already a cerebral player offensively, Randle has evolved from a solid face-up and post creator, into an all-around threat. Just take a look at this play:

That play doesn’t happen if Pascal Siakam stays at the free-throw line or waits inside the arc for Randle to dribble into him. Instead, Julius easily gets past him, forces the help defense to rotate over and bang. Randle, recognizing the defense sagging in as he attacks, kicks it out to an open Reggie Bullock for an easy three-pointer.

Tom Thibodeau has done a great job enabling his star forward by letting him initiate the offense like we see so many other bigs do in today’s NBA.

With the ball, Randle can use his threat of a jump shot or post presence to create shots for his teammates in more than just opportunistic passes off closeouts. While Bullock sets a screen for Randle, Devonte’ Graham is worried about Julius coming off the screen before realizing Randle’s man also followed the ball. The result is Bullock flaring out perfectly for another wide-open make.

Defense and the path forward

Unlike other players, Randle’s recent jump hasn’t killed his defense. He’s a solid defender, neutral if anything, but he hasn’t been a hole for opposing offenses to attack. Randle won’t get any plaudits for the Knicks ranking fourth in defensive efficiency, but he’s been solid and sharing the floor with solid defensive big men like Mitchell Robinson and Nerlens Noel behind him most of the time have allowed him to focus largely on orchestrating New York’s offense.

The winning streak is nice and all, but it’ll be interesting to see if Randle does get targeted come playoff time when it really matters.

Assuming the Knicks dodge the play-in tournament, they’re likely facing one of the Atlanta Hawks, Miami Heat, or Boston Celtics. Each team has an elite ball-handler on offense, while also offering several different defensive options to throw at Randle. The Heat, in particular, would be an intriguing matchup with their star two-way forward Bam Adebayo. That could create a bit of a problem for Randle and the Knicks if they want to advance to the second round.

The response won’t be to bench the team’s best player in Randle, but it’ll be interesting to see how, in his first career playoff appearance, he responds on the other end and if it’ll be a case of trading baskets back and forth or if the opposing team can largely take Randle out of the playoff series.

In just one season, Julius Randle has gone from a potential trade candidate to an All-Star and the best player on a top team in the Eastern Conference. With each win, the Knicks continue to solidify their rank in the East and could avoid the play-in series altogether and host a playoff series for just the second time since 2000. Looking back, I cringe a bit more to think about what was written in the January article, wondering if he would remain on the roster.

Whether or not Randle takes the team back to the top of the East or into title contention is still very much up for debate. In the meantime, he has played an instrumental role, alongside many of the other new additions, in changing the culture of Knicks basketball and bringing them back to respectability.