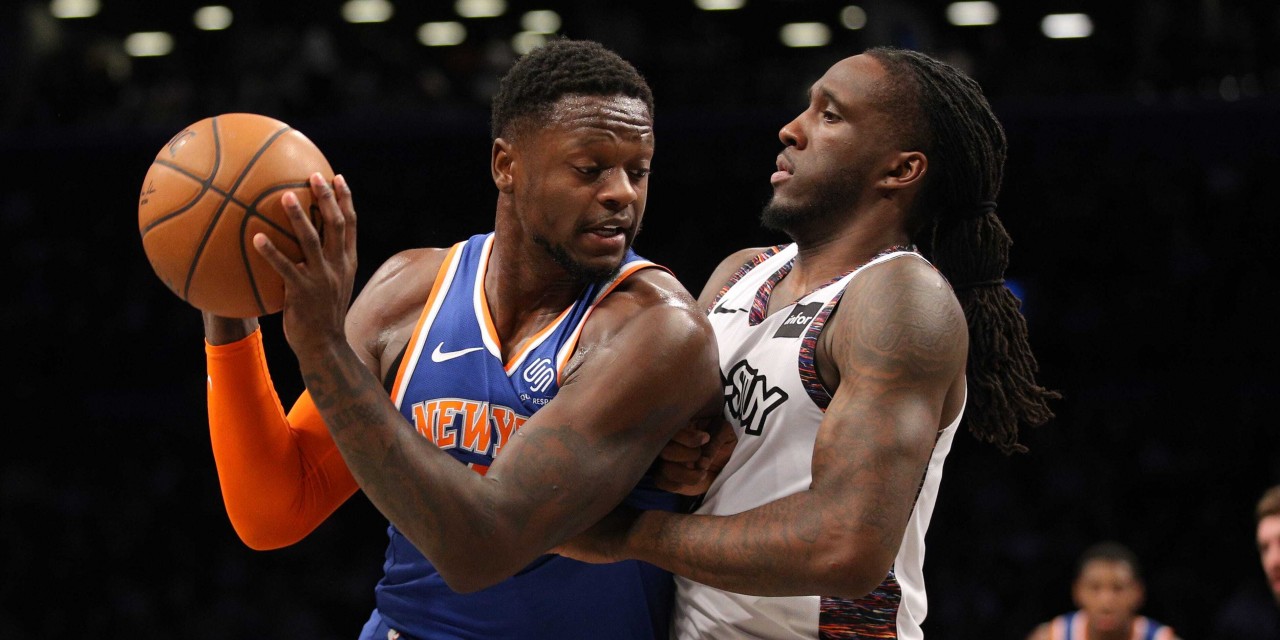 Strong defense from the Knicks along with clanking three-point attempts from the Nets buoyed a win for the ‘Bockers in Brooklyn.

The New York Knicks (8-24) beat the Brooklyn Nets (16-14) for the first time this season in three attempts, defeating them 94-82 at the Barclays Center. The Knicks held the Nets to season lows in points and field goal percentage (26.9%).

New York started from behind when Spencer Dinwiddie scored eight points in the first five minutes to put Brooklyn up early. The Knicks went on a 15-2 run over the last seven minutes of the first quarter to go up by nine.

The opening quarter wasn’t pretty for either team; New York shot 35% from the field while Brooklyn shot just 21%. The theme of poor shooting continued throughout the contest.

The Nets tied the game five minutes into the second quarter, letting the Knicks score just four points in the span. The teams went back and forth with the lead before a Marcus Morris jumper with 1:28 left in the first half gave the ‘Bockers a lead they would keep the rest of the way.

The Knicks jumped out to a 17-point lead halfway through the third quarter and went up by as much as 23. Elfrid Payton, starting at point guard, scored 11 in the third quarter, converting on 4-of-5 two-point shots in the paint. Marcus Morris chipped in 11 of his own, too, in that frame. New York led by 18 entering the fourth quarter and didn’t let up.

The Nets hunted three-pointers all game. They were able to generate open looks but couldn’t capitalize enough on them. They shot 13-of-50 from deep and made just eight two-pointers. Frank Ntilikina and Mitchell Robinson led the way for New York defensively; their ferocity made life much harder for Brooklyn’s offense.

Knicks players cited a lack of focus as a reason for the embarrassing loss to the shorthanded Washington Wizards in their last contest. At the top of the broadcast, MSG Network’s Rebecca Haarlow mentioned there was a new sense of energy amongst the team.

Haarlow reported that the loss to Washington and spending some time off with family for Christmas served as a reset button. Although tonight was a dominant win, New York still has plenty more work to do.

The Knicks shot just 40% from the field and 31% from behind the arc. Their offense was still overly comprised of isolations and post-ups with no second looks. New York also didn’t look to run the fast break at all. They pushed the pace more in the second half but rarely tried to score before the defense was set up.

Tonight was a solid bounce-back effort, but there’s still lots of work to do for this Knicks squad.

Julius Randle put on another strong showing after dropping a season-high 35 points on Monday. This time he scored 33 points on 14-for-26 shooting from the field and 5-for-9 shooting from behind the arc.

Randle scored New York’s first seven points of the game on his way to scoring 12 in the first quarter and 17 by halftime.

Five made triples is a new career-high for Randle. He matched his career-high in made three-pointers by halftime, shooting 4-for-5 behind the arc. He made his fifth a minute and a half into the second half. All of his makes were assisted as well.

If Randle wants to keep being good that would be really cool pic.twitter.com/1xXjveveAL

Just like in the last game, Randle didn’t bring the ball up. He even pointed to the point guard on the floor when his teammates looked to pass to him after grabbing the defensive board.

This hot showing came at the cost of any kind of passing or ball movement. Randle’s tunnel vision was perhaps the part of his game most displayed. He recorded two assists but still looked to shoot or post up just about every time he got the ball.

Randle’s hot shooting lifted the Knicks tonight, making it the first time he scored 30 points in back-to-back games as a Knick.