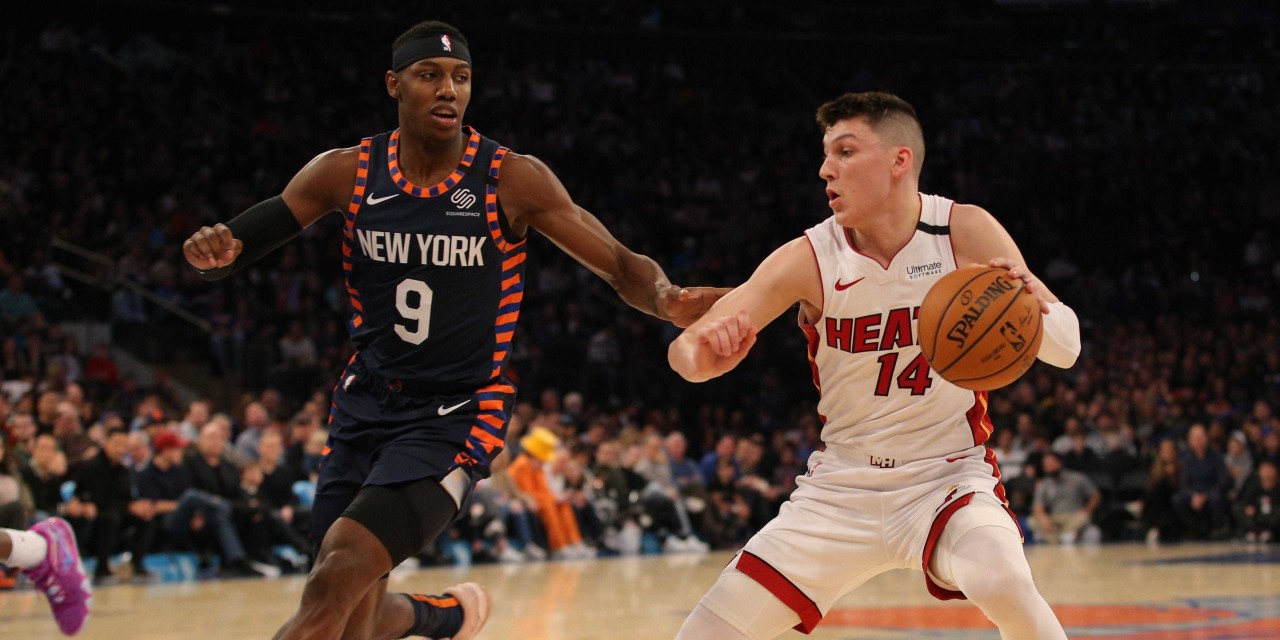 Julius Randle returned in dramatic fashion after a two-game bereavement leave to propel a Knicks fourth-quarter comeback win over the Heat.

The Knicks tempered the flames of the red-hot Heat, handing Miami another loss to end their road trip to the Big Apple.

New York (11-29) received a huge boost from Julius Randle, who was playing in his first game since the passing of his grandmother earlier in the week. Emotions were high for the big man on Sunday afternoon, fueled by the closely contested game and the passionate fans clamoring every step of the way.

The Knicks may have trailed for a majority of the game, but they remained in close proximity, matching Miami (27-12) without their top scorer, Marcus Morris. Randle helped push the tenacious Knicks forward, as they overcame an 11-point deficit entering the fourth quarter and overtook the Heat for the lead in closing minutes of the 124-121 win.

With 2:16 remaining, Randle drilled a three-pointer to give New York its first lead since the opening half of the game. James Johnson responded with a quick three to give Miami the lead for momentarily until a pair of Taj Gibson free throws put New York back in front. Shortly after, Randle added a set of his own foul shots and then a driving layup to pad the Knicks’ lead. R.J. Barrett made 2-of-4 free throws in the final seconds, which proved to be just enough to keep the Knicks on top.

The Heat desperately tried to salvage the game, but the Knicks locked down on Jimmy Butler on the final possession to preserve the victory, ending a five-game losing streak. Bam Adebayo launched a shot from well beyond the arc that went in, but it was after the buzzer sounded.

Randle finished with a game-high 26 points, with eight rebounds, four assists, and a pair of steals to boot. The rookie Barrett added 23 points, on 7-of-10 shooting, with five boards.

IN JULIUS WE TRUST 🔥🔥🔥 pic.twitter.com/gxASk79n5U

As for the Heat, Butler paced Miami with 25 points, 10 boards, and six assists. Kendrick Nunn added 20 points on 9-of-15 shooting. Johnson had 19 points off the bench. Adebayo and Tyler Herro had 15 points apiece.

With the win, the Knicks will now head on the road to face the Milwaukee Bucks (35-6) on Tuesday night. Tip-off is scheduled for 8 p.m. ET.

Randle had quite the performance in his first game back for his late grandmother. However, the Knicks were still without top-scorer Morris, injured Dennis Smith Jr., and Frank Ntilikina. It hasn’t been the prettiest recent stretch of games, but this kind of resilient effort will end that skid. It wouldn’t have been possible without having seven different players score in double figures.

Julius Randle lost his grandmother earlier this week and was away from the Knicks until last night. He scored 26 points in their win over the Heat today.
"Tonight was special," he said. "I really felt her out there."
This is what the last few days were like for him: pic.twitter.com/r6qEqndaYJ

Randle’s fourth quarter performance was crucial to the win, but Bullock also stepped it up late after a cold start. He had all 16 of his points in the second half, delivering key shots to keep the Knicks in hot pursuit of the Heat, before they eventually took over.

Turning back the time

Knox had his best game since the start of the New Year, especially after a number of ugly performances that had fans questioning his desire, body language, and whether or not he was regressing. It was his best performance off the bench since an efficient 19-point showing against the Milwaukee Bucks, on Dec. 21, who happen to be New York’s next opponent.

Meanwhile, Gibson looked like his vintage self today, and it was welcomed with Mitchell Robinson struggling on Sunday. Gibson chipped in boards and baskets, but his biggest contribution was his defensive effort against Jimmy Butler, especially in the closing minutes of the game to help the Knicks hang on for the win. He anchored the paint defensively.