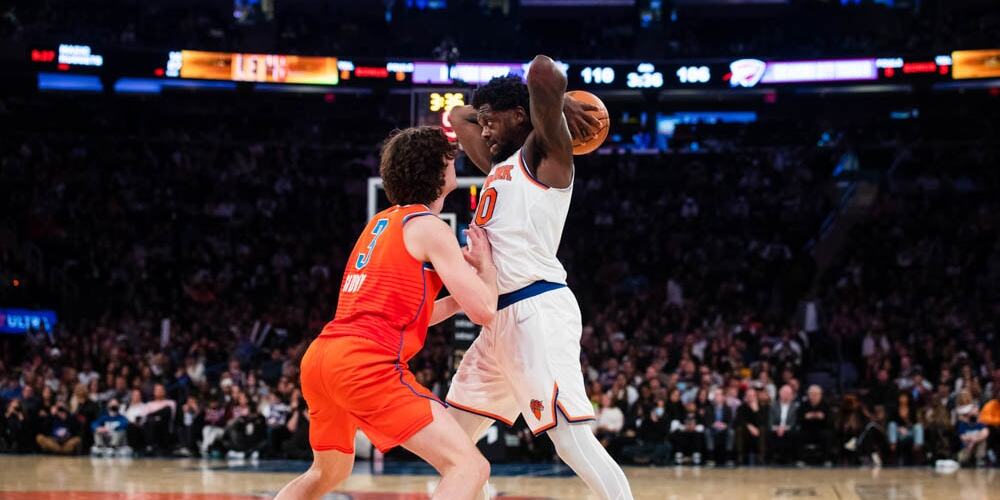 Julius Randle and the Knicks dropped another winnable game, this time at home to the Thunder, after losing four of five games on the road.

NEW YORK, N.Y. — On the heels of blowing a 23-point second-half lead in Portland on Saturday, the free fall continued on Tuesday. The New York Knicks have somehow managed to reach a new low, as they allowed themselves to get swept in the season series by the rebuilding Oklahoma City Thunder. Even with Julius Randle and Evan Fournier scoring 30 and 29 points, respectively, the Knicks let the game get away late, which included a horrific turnover from Randle and questionable decision-making from head coach Tom Thibodeau.

Closing games has been a struggle for the Knicks all season; the Knicks are only behind the Celtics for the most blown leads this season. Thibodeau continues to point out how the team has to do better late in games. “The fourth quarter is different, the intensity is different so we got to be better with it…We got to finish better, we know that.

“That was my fault. I screwed that up,” said Thibodeau on his decision to burn the team’s final timeout and challenge a play with 39 seconds left in the fourth quarter after unsuccessfully challenging a separate play just mere seconds before with 1:07 left in regulation. After “losing my train of thought,” as the coach put it with his fourth-quarter blunders, the team was able to bail him out with an Evan Fournier steal that led to a Quentin Grimes layup to take the lead with 15.2 seconds left. Unfortunately for the Knicks, that was too much left and OKC was able to answer along with fending off a potential Randle game-winner, sending the game into overtime where the Knicks would meet their demise.

Julius Randle recognizes New York’s late-game issues. “For some reason, we’re not playing as fast and uptempo late, so it’s a lot of stagnant situations in the halfcourt.” The Knicks become a more predictable team later in games, making it easier for opponents to stop Randle. “They can really load up and it makes it’s tough, so we got to figure out how to have the same pace late in the game,” he added.

The Knicks’ once fearsome bench continues to be a non-factor, most notably Immanuel Quickley, who is bordering on unplayable. Thibs brought some insight into his second-year guard’s struggles. “With shooters, confidence and concentration are probably the two most important things.” Quickley shot 0-for-7 from the field versus OKC and is shooting an abysmal 21.7% from the field and 14.8% on three-pointers in February.

The Knicks’ head coach has not lost faith as he pointed out Quickley’s work ethic. “He’s a diligent worker. He’s in morning, noon, and night shooting. So, you just gotta stay with it, continue to groove your shot, it’ll come back around.” Thibs also gave some insight into a possible solution for Quickley. “The big thing is to get him to see what he’s done well in the past and then to put the work into it.” With Quickley trying to resolve his shooting woes, it may be time for Thibs to give someone else a shot.

As the Knicks continue their tumble down the standing, they’re not looking to dwell too much on the recent slew of ugly losses. Evan Fournier knows how important some home cooking is after a tough road. “The first game back after a long road trip like that you always try to establish confidence at home.” Sadly, the Knicks weren’t able to assert themselves against the Thunder. “We’ve had a disappointing loss in Portland, a disappointing loss tonight … This is a challenge mentally and physically,” Fournier added as he begins to feel the pressure of the mounting losses. This most recent game might have been the Knicks’ last real chance at a dominant, confidence-boosting win before going into another brutal stretch of games.

“We’re just letting a lot of them go, honestly. That’s probably [five or] four losses of our last five were probably very winnable games. The story and narrative would probably be a lot different, but, you know, I’m not going to dwell on it,” said Randle if he wonders how things would look if they held on in some of those games.

It has not been an easy season as the same issues persist in the Garden and, worst of all, there doesn’t seem to be an end in sight with the front office not making any moves by keeping the team intact past the NBA trade deadline. It’s safe to expect more of the same from the Knicks. They are hosting the new-look Brooklyn Nets up next, who have had their own turmoil on and off the court this season. But, unlike the ‘Bockers, the Nets did choose to address some of their problems.