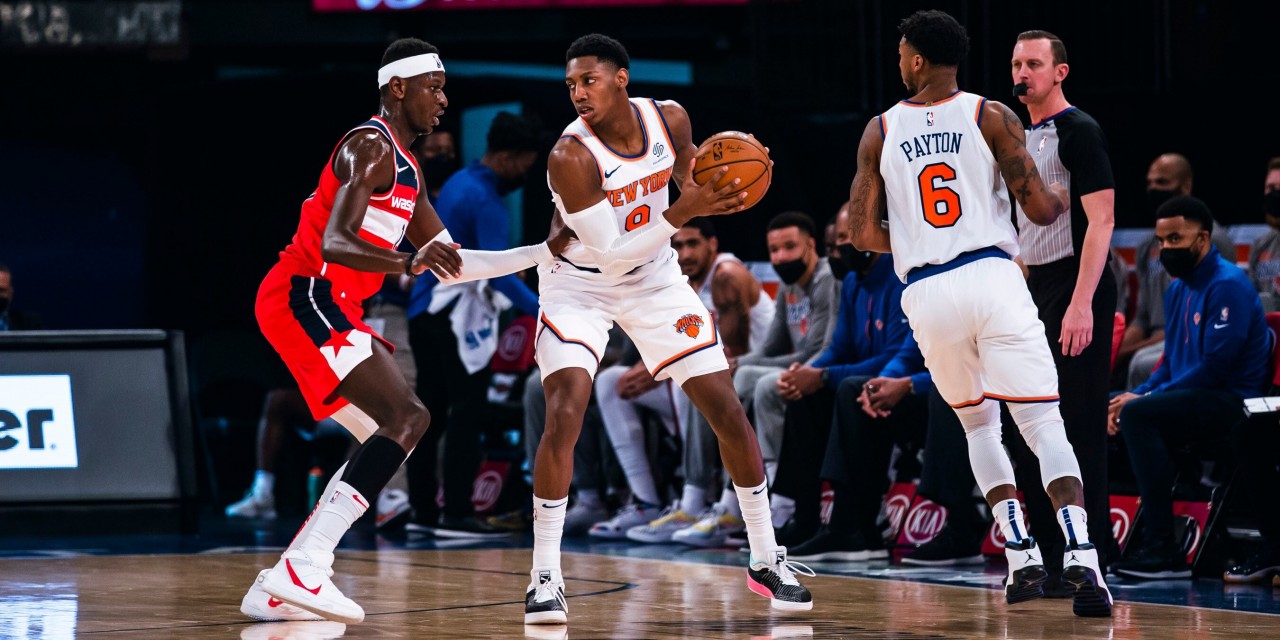 All-Star Julius Randle poured in 37 points in an all-around impressive game for the Knicks over the Wizards ahead of two straight games with the D.C. club.

Beat the teams you are supposed to beat. That is the bare minimum for a playoff team and exactly what the New York Knicks (22-22) did as they stomped the Washington Wizards (15-27) by a score of 131-113.

It was a Julius Randle masterclass all night and an offensive explosion for the Knicks. Defense came at a premium at the start. The Knicks did not defend very well, but neither did the Wizards. The Knicks shot 58.3% and hit five three-pointers on their way to a 39-point opening quarter. Poor play on the defensive end prevented a double-digit lead, instead giving the Knicks a 39-31 edge. The second quarter was not much different from a scoring standpoint, only the defense woke up as well. That combination allowed the Knicks to take a nice 69-49 cushion into the locker room.

There was only one reason to tune into the second half: Julius Randle. He erupted for another 16 in the third quarter, reaching 37 points before the fourth, including 7-of-9 from beyond the arc. Randle was far from the only one scoring as the Knicks threw up a second 39-point quarter to make this a 108-80 laugher heading into the fourth.

Randle checked back into the game in the fourth but did not score again. The fourth quarter was a classic garbage-time period, the only quarter the Wizards would win all night.

The Knicks surpass their win total from all of last year in just their 44th game of the season.

The evolution of Julius Randle and R.J. Barrett as a duo continues to progress. Randle was in his bag tonight from the very start. The first-time All-Star made his first four shots, including a pair of three-pointers, and stayed hot the rest of the hot, scoring 21 points. He stayed hot in the second half, bullying the Wizards for 16 more in the third to increase his total to 37 points after three quarters.

Barrett was aware that tonight was Randle’s night and focused on playmaking. He started the game with five assists, and all five were truly great finds. He would still get chose his spots rather than forcing it, and still managed to score 21. Scoring aside, he had some good defensive moments including an empathetic block against Russell Westbrook.

The Knicks will go as far as Randle and Barrett take them. And both seem up to the challenge.

Even the staunchest of Elfrid Payton supporters cannot defend that Payton has lost any will to feed his teammates. Payton continued to display tunnel vision once he commits to a drive—and continued to miss. Payton started 1-for-5 in his first game back from injury and reminded why so many wish him well with his future endeavors sooner rather than later.

Payton mercifully stopped forcing shots, however, finishing with a forgettable seven points. It wasn’t all bad for Louisiana native, he had three steals and ended up with four assists to only one turnover.

IQ WITH THE CROSS AND STEP BACK 3🤭🤭🤭 pic.twitter.com/Eh4tS2FASe

Such a sweet move from Quickley, sending Neto express and then capping the play off with the made three.

The Knicks will look for the two-game sweep on Thursday against the Wizards again at MSG following the trade deadline.