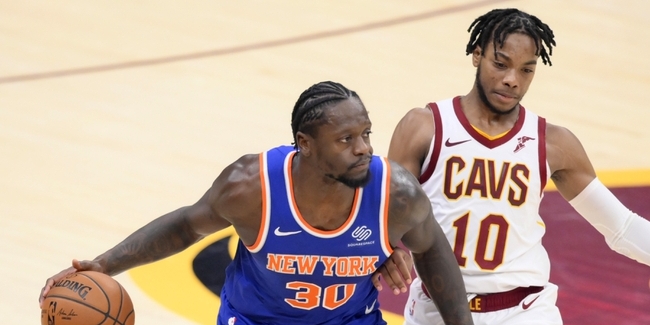 Julius Randle had his career game as a Knick on Tuesday in a too-close-for-comfort victory over the Cavs in Cleveland. The Knicks even up at .500.

Julius Randle continued his hot start to the 2020–21 NBA season on Tuesday night, providing a dazzling performance from start to finish. Randle had his first-ever triple-double as a Knick, as the New York Knicks (2-2) held off the Cleveland Cavaliers (3-1) to win 95-86.

He quickly left his mark, helping the Knicks pounce on the Cavs from the opening tip, as they took a 29-15 lead after the first quarter. Things slowed down for New York afterward, as Cleveland capitalized on turnovers and mistakes to narrow the gap.

Despite their issues with taking care of the ball, the Knicks regained some separation and a buzzer-beating three from Reggie Bullock gave them a 53-46 edge going into the half.

New York held onto the narrow lead. While the Knicks continued to struggle with turnovers, they remained tough on the defensive end. The Cavs never got into a groove offensively and shot just 36.4% as a team overall and a lackluster 7-of-32 (21.9%) from beyond the arc.

The Knicks iced it late and put the game out of reach over the closing minutes.

Aside from Randle, three other Knicks finished in double figures. Reggie Bullock had 17 points and seven rebounds. Elfrid Payton picked it up in the fourth quarter and totaled 14 points, eight boards, and seven assists. R.J. Barrett added 12 points and seven boards.

Randle has been off to a nice start this season, and he remains to consistently improve and demonstrate much better all-around play under new head coach Tom Thibodeau.

The Knicks won and pulled to 2-2 behind a MONSTER NIGHT from Julius Randle, a 28-point, 12 rebound, 11 assist TRIPLE-DOUBLE in 44 minutes🔥@kylemaggio with the tape from the FIRST Knicks triple-double for @J30_RANDLE, the 7th of his career. 👀 🍿 pic.twitter.com/8FJJqRE5xm

Randle put together another solid game on the road—his best yet—coming through with a triple-double. Sure, he turned the ball a bit too much, but cleaned up after halftime, with only three of his nine turnovers coming over the final two quarters. With a short eight-man rotation and injuries hampering the team, he stepped up his game and led the way from the opening tip.

His improved passing ability, decision making, and shooting have been a welcomed addition for the Knicks so far this season and it might be time to leave any Randle slander in the past.

The turnover bug wasn’t limited to Randle. Overall, as a team, the Knicks had 15 of their 24 giveaways in the first half, which was nearly as many as they’ve had in each of their first three games this season.

Some of it can be attributed to the absence of Immanuel Quickley and Alec Burks. The turnovers were a detriment in the Knicks’ first two losses of the year, and they allowed the Cavaliers to roar back into the game after a blistering start by the Knicks. Credit the Knicks for cleaning it up a bit after the break, but they probably should’ve put the game out of reach much earlier.

Frank Ntilikina probably deserved more playing time, especially with Quickley and Burks out, but it doesn’t look like the Knicks will get those key playmaker minutes they need until they come back.

The Knicks were one of the worst three-point shooting teams last season, going 33.7% from long range (27th in NBA). New year, new coach, and so far New York is building that confidence from deep.

Against the Cavaliers, the Knicks went 14-of-25 (56.0%) from deep. Randle was perfect, but Bullock also poured it on. Payton, Kevin Knox, and Ntilikina connected from long range, too.

Defensively, the Knicks dialed up another good performance. For a second straight game, their opponent couldn’t get it going from deep. They kept Cleveland in check, holding a team to just 21.9% from deep after entering Tuesday with an NBA-best 43.4% this early in the year.

The Knicks’ three-point shooting and defensive effort helped mask turnover issues and free-throw shooting woes. If they can keep this up, it’ll be a refreshing bit, after they struggled in both areas last year.

REGGIE WITH THE BUZZER BEATER! KNICKS UP 53-46 AT HALF pic.twitter.com/LS2mdhdzaL

The Knicks have now won back-to-back games and improve to 2-2 overall. They return to action on the road for a New Year’s Eve matchup with the Toronto Raptors in Tampa, Florida. Tip-off is scheduled for 7:30 p.m. ET on Thursday night.