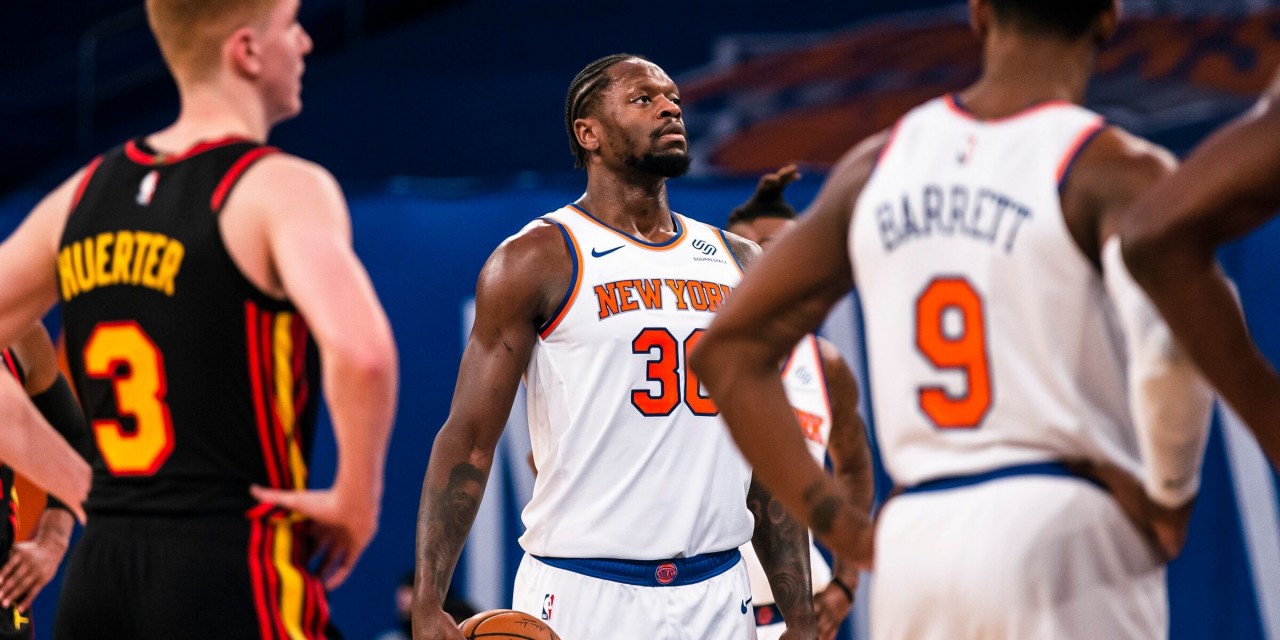 Teammates and head coach Tom Thibodeau were ready to crown Knicks’ Julius Randle with his first All-Star selection after 44 points against the Hawks.

NEW YORK, NY — New York Knicks power forward Julius Randle was one point shy of his single-game career-best scoring output on Monday in the feel-good home win over the Atlanta Hawks. Randle would finish with 44 points on 22 shots, nine rebounds, five assists, and a career-high seven made three-pointers. And the Knicks needed every ounce of it.

Randle arrived in New York via free agency in 2019 on the largest contract doled out by the Knicks during the same summer they whiffed on Brooklyn Nets stars Kevin Durant and Kyrie Irving. A three-year, $63 million deal with a team option in the third year handed Randle his new home in the Big Apple—along with all of the pressure that came with being the new face and no. 1 option for the Knicks.

“Honestly, I just felt I kinda let the team down last year. I felt like I didn’t have my best performance,” Randle reflectively opined during the postgame Zoom call on Monday evening. “[It] wasn’t because I didn’t put the work in, I just had to go through a year of growth, a year of experience of being [in] the position I was in.

SMASH THAT RT BUTTON & VOTE FOR OUR #NBAALLSTAR #JULIUSRANDLE

Randle’s clutch shooting, including a 17-point first quarter, was enough to lift the Knicks over the Hawks in a 123-112 effort, keeping New York in sixth in the Eastern Conference among a tight grouping of teams (two games separate the fourth and 10th seeds). For his Herculean effort, Randle has been embraced by his teammates, young and old.

“It’s an amazing feeling,” Randle said about his teammates’ support. “You know, for me, those guys trust in me and believe in me every night to go out and lead the team—it’s a great feeling.”

Knicks rookie guard Immanuel Quickley, who added 16 points in 22 minutes off the bench, is already trying to emulate the leadership attributes that Randle possesses. “He’s a great role model for guys like me, coming into the league, my first year. So something to look at, something to be inspired about.”

Quickley was joined by a handful of teammates immediately following the win to crowd Randle around the microphone before a one-on-one interview with MSG Network, hyping up the All-Star hopeful with reserve wing Theo Pinson declaring “If this man’s not an All-Star, there’s a problem.”

“He works hard every day. And I think he deserves it. An All-Star is well deserved for Julius Randle,” Quickley added postgame.

“What else does he have to do?”, second-year swingman R.J. Barett said after the game. “The man’s an All-Star.”

Randle has a good case for his first-ever All-Star nod, but the selection process is not kind and there are so many viable candidates. Whether he ends up securing the career achievement as an All-Star in Atlanta next month or not, the former Kentucky big man has secured the respect, loyalty, and trust of both his teammates and coaching staff.

“He was really good last year, too. He’s a hard worker, he’s one of the hardest workers I’ve ever seen, and the team, we’re behind him 100%,” said Barrett. “He’s making the big plays, he’s leading us, it’s great to watch him flourish.”

Head coach Tom Thibodeau effused praise upon his team’s leading scorer and rebounder. “It’s a reflection of all the work he’s put into it,” Thibodeau started while checking off impressive qualities of Randle’s game. “He’s always been terrific off the dribble, he’s always had the back-to-the-basket game, but getting comfortable shooting the three has added a lot to his game.”

Randle let it rip from outside to the tune of 7-of-13 shooting from three-point range. The Knicks have sorely lacked consistent outside shot, but Monday saw six different players convert on two or more three-pointers, adding a crucial element to the NBA’s lowest-scoring offense.

But even Thibodeau is getting in on the All-Star hype for the seven-year veteran. “The most important thing is the impact that he’s having on winning and, hopefully, it will be recognized, because I know there’s great appreciation by his teammates, his coaches, the organization, certainly our fans, for what he’s bringing to our team.”

Immanuel Quickley saw extended minutes to finish out the game in the fourth quarter against the Hawks. The Knicks first-year guard recorded 16 points and five assists along with four made threes. Derrick Rose, in his fourth game with the Knicks this season, scored a season-low eight points for New York but picked up three assists and a pair of blocks. His defense in place of starting point guard Elfrid Payton was a difference-maker on Trae Young and Atlanta late in the game.

Quickley unintentionally joked about the similarities between Young and himself. (Monday saw some eye-rolling calls by the officials for both teams as the All-Star floor general went to the free throw line 12 times and the rook four times. Both guards are clever in how they pick up fouls.)

“I actually watch film on him a good amount. You’ve seen it today, draw fouls—he didn’t hit as many of them, but his floater in the lane, he’s really good at that,” Quickley said after the game. “You gotta try to be your best when you guard a player like that.” Perhaps the 21-year-old Quickley will have similar comments made about him by others in the near future, too.

The Knicks are in Orlando on Wednesday before a five-game homestand, but it appears that Frank Ntilikina (COVID-19 contact tracing) will still be out. Earlier on Monday, Thibodeau said that Ntilikina continued to test negative but that it wasn’t a done deal that he can rejoin the team. Additionally, Mitchell Robinson (broken right-hand fourth metacarpal) is consulting another medical expert on Tuesday.