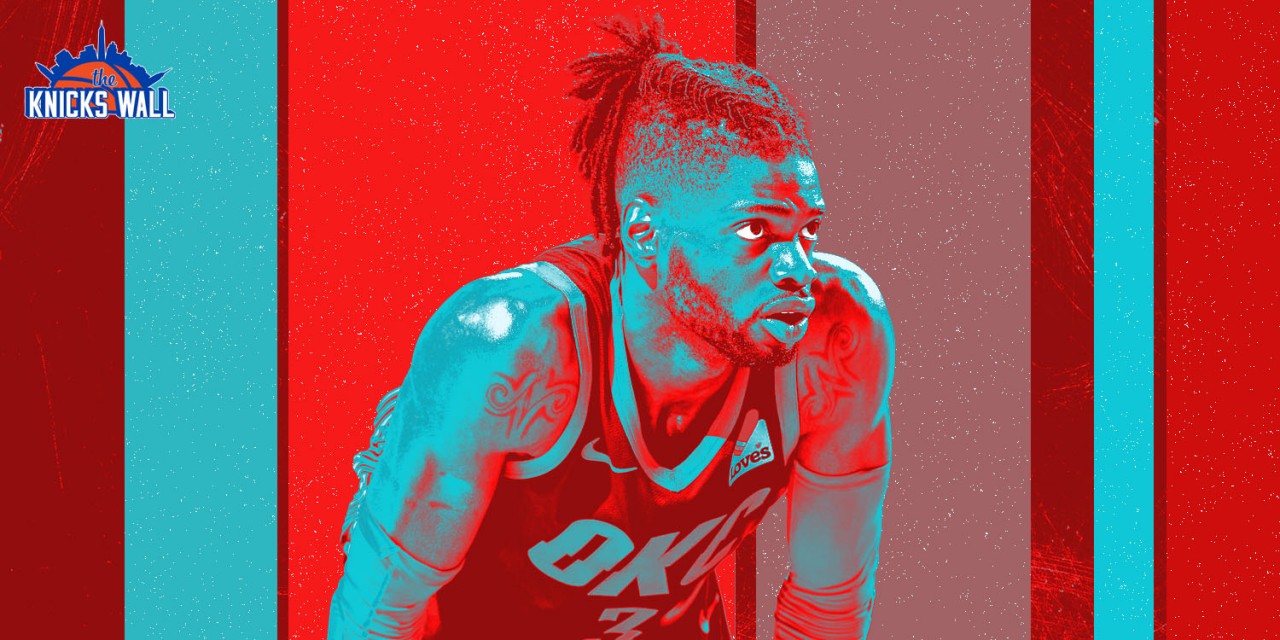 The Knicks brought in big man Nerlens Noel to shore up the frontcourt, but is there anything else the former Kentucky center can do here?

Former top-pick Nerlens Noel signed a one-year, $5 million deal with the New York Knicks, presumably to back up Mitchell Robinson. Noel survived recurring knee injuries as well as some of the darkest years of “The Process” in Philly after being selected sixth overall by the Sixers in 2013. He was traded to Dallas in February 2017 and settled into a role off the bench, a part he continued to play in Oklahoma City for the last two seasons.

Noel showcases a skill set remarkably similar to that of Robinson: rim-running and shot-blocking. They are currently the only two centers on the roster, although with their glut of power forwards, it’s almost certain that some of them will get reps playing small-ball five.

This sort of roster construction indicates that head coach Tom Thibodeau won’t be looking to have either of his centers post up. Rookie Obi Toppin may, and assuming they’re not traded, so could Julius Randle or Omari Spellman—who, per NBA.com, averaged 4.2 and 2.5 post ups per game, respectively, last season.

During the 2018–19 season, Thibodeau’s final full season with the Timberwolves, Karl Anthony-Towns led the league in post touches, with 12.9 per game. It could be assumed that some of these would be spread out amongst New York’s current array of big men, but with the limited spacing that Robinson and Noel could provide, Thibs may have to get creative if he wants a functional offense with even a fraction of that number of post ups.

At 26, Noel isn’t yet the sort of veteran a team brings in only to mentor a player like the 22-year-old Robinson. A one-year deal means they don’t see him as a part of the team going forward, but they do see him as contributing this season, so getting any prolonged benefits from this signing would be a bonus.

Noel may have picked up some tricks along the way. Maybe former teammate Steven Adams taught him some secret to set bone-crushing screens (beyond being made of stone) that he could pass along. However, as previously mentioned, Noel began his career with the Process Sixers.

He spent just over three and a half seasons in Philly, from the time he was drafted, to the time he was traded to Dallas. During his time there, the Sixers won just 68 total games, including the 2015–16 season in which Philly won only 10 games, the third fewest in NBA history.

"I want to be a big brother to him, give him a lot of advice" pic.twitter.com/oXcvl0iJYR

The Knicks have won 38 games in the two seasons since they drafted Robinson. There’s clearly a gap in the expectations for a sixth overall pick, and a second-rounder like Robinson, but the similarities remain. There’s only so much that centers like them can do. The ball isn’t in their hands every trip down the floor; they rely on the players around them to put them in position to score. Be it Michael Carter-Williams or Elfrid Payton at point, it would only be natural for them to get frustrated. It’s possible that Nerlens’ most important role could be as a sort of therapist for Mitch.

That doesn’t sound so appealing, being resigned to the role of veteran mentor at 26, so why would Noel sign with the Knicks?


Fans have noticed two threads running to the majority of the Knicks’ moves this offseason. Firstly, Leon Rose, current team president and former co-head of the basketball division at CAA Sports, has made a point of bringing in several players represented by his former agency (and not the good ones like Towns, Devin Booker, or Joel Embiid.)

However, Noel is repped by Rich Paul of Klutch Sports, who left CAA to start Klutch. The other avenue the Knicks have honed in on recently: former Kentucky players. This offseason, New York added former Kentucky assistant coach Kenny Payne to the staff. Payne’s reportedly well-liked by former Wildcats and was likely a draw for Nerlens, who joins Kevin Knox and Randle as Kentucky Knicks.

It remains to be seen if the draw of playing for Payne again is enough to entice some higher-profile former Wildcats, but in this instance, the hypothesis holds up.

While unlikely to move the needle too much for New York, Noel has proved that he can contribute positively to a NBA team. Seemingly a low bar, but one the Knicks haven’t always cleared with their signings.

»READ: Bully-ball is back: can the Knicks learn from the New NBA champs Lakers?