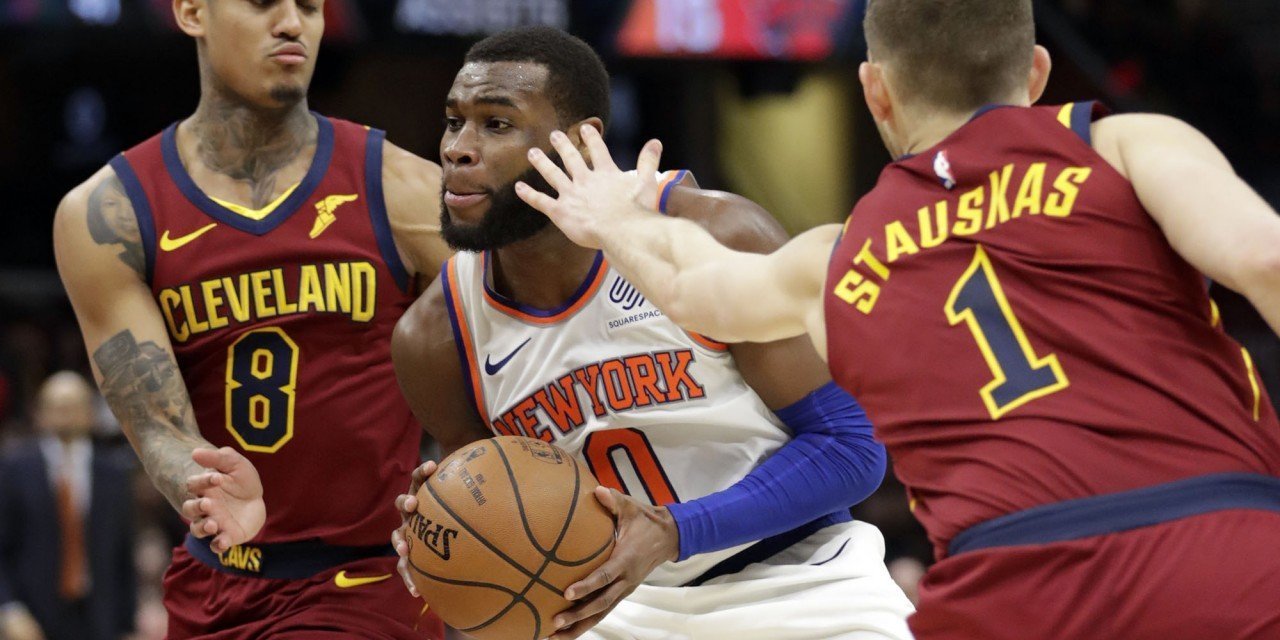 Despite impressive showings from Kadeem Allen and Mitchell Robinson, the Knicks fell to the Cleveland Cavaliers, and set a new franchise record for consecutive single-season losses.

The Knicks have taken the mantra “Tryin’ for Zion” to an entirely different level.

New York trailed the Cleveland Cavaliers from the tip-off Monday night and never fully recovered. Despite playing inspired ball in the second half after finding themselves down by as much as 17, the Knicks ultimately lost the very winnable game, 107-104.

The New York Knicks (10-46) lost (or won?) the second-to-last game of the Zion Bowl to the Cleveland Cavaliers (12-45), and now sport a firm 1.5 game lead over Cleveland for the worst record in the NBA. The game was their 17th straight loss—the most in consecutive single-season losses in team history.

The contest started out sloppy, with both teams combining for six travels in the first half alone. Kevin Love dominated the first quarter, scoring 12 points, but he didn’t see much action late in the game, as the bottom-dwelling Cavaliers continue to work their veteran power forward back into the lineup slowly. Kevin Knox started out hot in the first quarter, scoring seven points, but mostly struggled for the remainder of the game. He finished a paltry 5-of-16 from the field, with with 13 points, six rebounds, and three assists.

New York trailed by 15 at halftime and 17 just a few minutes into the third, before David Fizdale made a couple of key shakeups—inserting Kadeem Allen in the game, and making the switch to a zone defense. After giving up 30 and 33 points in the first and second quarters, respectively, the Knicks gave up only 26 and 18 in the third and fourth quarters. By rotating between a 2-3 and 3-2 zone, New York was able to completely befuddle the Cavaliers’ offensive attack. The length of Allen, Dennis Smith Jr., Knox, Luke Kornet, and Mitchell Robinson forced the Cavs into some uncomfortable, contested threes.

After a pair of clutch threes from Kornet late in the fourth, the Knicks found themselves down only one point with about a minute and a half to go. Unfortunately, Kornet couldn’t get another three to go, after hesitating on a wide-open look that would’ve put New York ahead for the first time in the game.

Despite a close but ultimately ugly loss to the league’s second-worst team, there were some bright spots along the way, particularly in third-year point guard and former G Leaguer Kadeem Allen, who set a new career-high with 25 points on 10-of-16 shooting to go along with six assists, three rebounds, and one steal. Allen outplayed lottery pick Collin Sexton (20 points, three assists, one rebound) while playing inspired defense all night. This is Allen’s second strong game in a row, after scoring 14 points in just 19 minutes in a similarly close loss against the Raptors Saturday night.

I AM HEREBY DECLARING MY LOVE FOR KADEEM ALLEN pic.twitter.com/D8tZOCvczt

Mitchell Robinson also had another efficient game. He made his mark quickly, scoring off of an offensive rebound and put-back almost immediately after getting subbed in for DeAndre Jordan. Robinson finished the game with 10 points, eight rebounds, two blocks, a steal, and his usual active defense around the rim. This also marks the fourth straight game for Robinson with double-digit scoring.

And of course, there was this Dunk of the Year candidate from Mario Hezonja in the second.

Side note: how does Hezonja keep randomly throwing it down like he’s Vince Carter? The dude is the biggest head-scratcher in the NBA.

Dennis Smith Jr. had his second-straight below-average game, scoring just 10 points on 5-of-12 shooting, including an 0-for-2 night from downtown, to go along with four assists and two rebounds. But Smith looked engaged on the defensive end, chipping in three steals and some solid on-ball defense.

The Knicks are back home at the Garden Wednesday to play the red-hot Philadelphia 76ers.