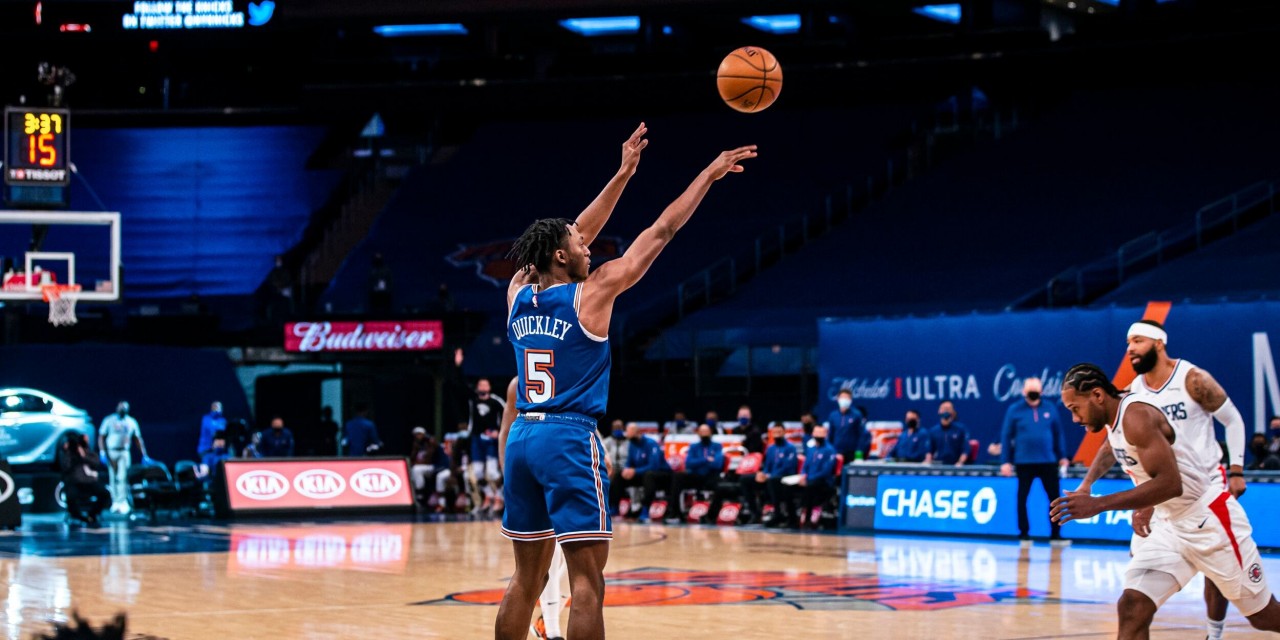 Immanuel Quickley scored 25 points off the bench, but the Knicks and their defense were no match for the surging Clippers offense.

The Los Angeles Clippers (16-5) roared back to beat the New York Knicks (9-12) after an early east-coast start forced the west coast-based team to wake from its slumber. The best three-point shooting team in the league showed up to finish off the Knicks after an uncomfortably close margin for most of the game, eventually ending 129-115.

Kawhi Leonard, a two-time NBA Finals MVP, had a masterful performance at Madison Square Garden, scoring 28 points on 8-of-15 shooting from the field along with 11-for-11 from the free throw line. Leonard had several punishing buckets to break up Knicks mini-comebacks.

After the Knicks’ top duo Julius Randle and R.J. Barrett led the team to a one-point deficit in the first half, rookie guard Immanuel Quickley picked up the slack in the second half, turning into a microwave in the fourth quarter to keep New York in striking distance. Quickley scored 14 second-half points, including several floaters that seem to magnetically find the bottom of the hoop.

The Clippers, entering today’s game, were shooting 41.4% from three-point distance, per NBA.com, and the Knicks had no answer for multiple role players stretching the court and hurting New York from deep. Los Angeles finished with 17-of-38 three-point shooting (44.7%), including key looks from bigs like Serge Ibaka and former Knicks Marcus Morris Sr. (who picked up a technical).

Despite standout performances from Randle (a 27-point double-double and five assists) and Barrett (23 points on 14 shots, 5-of-6 from the foul line), the Knicks couldn’t stick around against Tyronn Lue’s churning offense, which scored 66 first-half points and 101 points through three quarters. The Clippers recorded the most points as a Knicks opponent thus far this season, 129 (previously: Indiana Pacers, 121 on opening night).

Immanuel Quickley and his self-professed idol Lou Williams had a bit of a bench-unit duel in the first half. The Knicks rookie scored 10 points in 11 first-half minutes, shooting 3-for-5, with his only two misses coming from long-range attempts. Williams, meanwhile, demonstrated his clever and slick play carving up the Knicks defense for nine points on five shots and three assists.

At one point in near back-to-back possessions, Quickley flashed his patent-pending floater followed by a floater by Williams.

Quickley continued to flex his scoring chops early into his NBA career, eventually finishing with 25 points in 27 minutes off the bench (playing six more minutes than Elfrid Payton with the ongoing controversy of starting on everyone’s minds). Quickley joined Randle and Barrett as three Knicks to finish with 20-plus points. Payton was the only other Knick in double figures (10).

Clippers bigs (including stretch four Marcus Morris) hurt the Knicks on Sunday with three-point shooting. This was largely due to Julius Randle and Mitchell Robinson’s preference to stick to the paint. Late closeouts led to open three-point looks by Serge Ibaka, Patrick Patterson—in just his first start and eighth game this season—and Morris. (Strangely, Randle converted on his first four triples before missing one.)

Ibaka, Patterson, and Morris finished with nine three-pointers on 13 attempts—a backbreaking statistic given Leonard and Paul George combined to shoot 2-for-11 from deep. Much of this, of course, was due to Leonard’s penetrating and warranted extra attention from Knicks help defenders, allowing open looks from stretch bigs when Randle and Mitchell Robinson (nine points, six rebounds, one block) failed to respect the Clippers’ collective outside shot.

We need to talk about Austin Rivers, Obi Toppin, and the Knicks bench. While Tom Thibodeau keeps a short rotation (normally we see eight or nine players log minutes; Sunday was 10) and thus big minutes for starters, there were characteristically awful stretches with the bench unit. Rivers, facing his one-time ex-club, shot 1-of-4 for four points and two assists while rookie forward Obi Toppin, the eighth overall pick in the 2020 NBA Draft, was 0-for-2.

Further, with Nerlens Noel out on Sunday, Taj Gibson had his first extended minutes back with the Knicks, and he struggled. Quickley was the only positive coming off the pine, and the Kentucky product third-most minutes.

We saw more mixing and matching with the bench and starters from Thibodeau today, with Alec Burks (3-for-8 from the field for seven points) playing an extended stretch with the starters minus Payton and plus Quickley.

The bottom line is there has to be a more consistent effort from the bench. Kevin Knox was a DNP-CD on Sunday and the non-starters shot 3-of-16 from three, sinking the team at times without Randle and Barrett in the ball game.

RJ BARRETT with the beautiful fadeaway. He’s even becoming an end of shot clock go get a bucket guy. This is amazing. pic.twitter.com/mp6o5TAPZT

The Knicks prepare for two straight road games with the Chicago Bulls, starting tomorrow following with a day off in between the matchups. Chicago is coming off a deflating buzzer-beater from Damian Lillard and the Portland Trail Blazers. Go check that out if you haven’t if you want to smile.