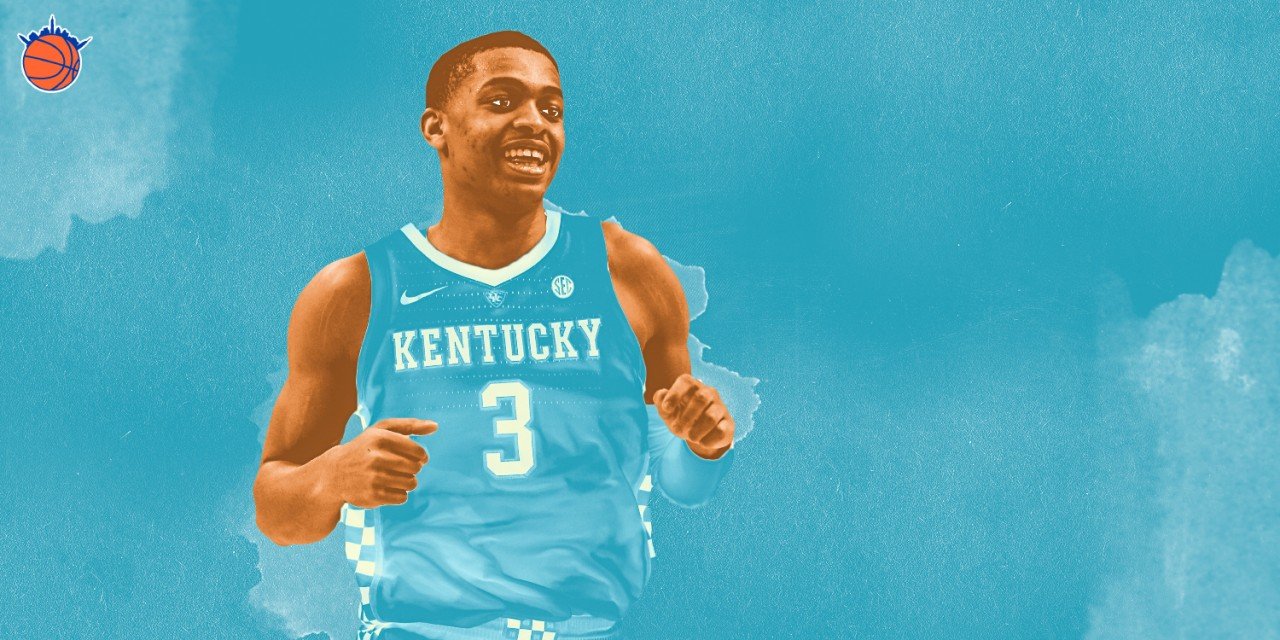 A Kentucky product like Kevin Knox, the stringy Keldon Johnson is looking to shed mental mistakes and find a first-round team to contribute to.

The Knicks Wall is setting a spotlight on the top prospects in the 2019 NBA Draft. Follow along with weekly features on the draft and players. Next up is Kentucky swingman Keldon Johnson.

Coming to Kentucky as a former McDonald’s All-American, consensus five-star recruit and the product of high school basketball powerhouse Oak Hill Academy—where Carmelo Anthony, Kevin Durant, Rajon Rondo, and many other NBA stars once played—Keldon Johnson had great expectations to live up to.

He arrived alongside three other five-star prospects, but Keldon emerged as one of the hottest prospects for the 2019 NBA Draft.

It wasn’t an entirely easy transition to the collegiate level for Johnson, who hit some rough patches midway and toward the end of the season—leading some pundits to believe he wasn’t ready to take the jump to the professional level just yet.

However, it seems NBA execs and scouts have seen past his turbulent times and focused more on his upside, athleticism, and potential. Mock drafts don’t seem to mind either, with Johnson widely projected as a surefire first round pick.

All in all, it was a productive college season for Johnson, who was one of the Wildcats’ top scorers, rebounders, and defenders this past year.

In his lone season at Kentucky, he started in 36 of 37 games, averaging 13.5 points, 5.9 rebounds, and 1.6 assists while shooting 46.1% overall and 38.1% from long range. He was named the SEC Freshman of the Year. After a year filled with highlights and disappearing acts, what can we expect from Johnson at the next level?

Scoring Ability: When he’s on, he’s on.

Johnson has showcased an ability to heat up in an instant, with the ability to score at will and from almost anywhere he wants. An excellent slasher and finisher inside, he’s at his best when he lowers his shoulder and drives to the basket. Johnson is an explosive athlete with great quickness and creativity on drives, able to free himself up for a shot.

When he hits top speed and runs down the lane, he’s a difficult player to stop. He’s a threat in transition, and has a great first step to shake defenders when he needs to initiate in the half court. The 6-foot-6 wing is comfortable finishing through traffic and has the strength to absorb contact.

As good as he is as a slasher, he’s far from being a one-dimensional scorer. He can score off the bounce and nail his shots in motion—making him a threat in the mid-to-close range.

Of all Kentucky shooters who attempted at least 100 threes this past season, he led the team with a respectable 38.1% from beyond the arc.

»READ MORE: On Ja Morant and the offseason contingency plan

High Motor/Defense: When the ball isn’t in his hands, or when he hits a cold spell with scoring, Johnson is still a very involved player. He can impact almost every other facet of the game. He plays with a seemingly limitless supply of energy, unafraid to crash the boards or keep his man in front of him and play high-pressure defense. His athletic gifts and solid vertical leap help him excel on this end of the court.

He came to Kentucky billed as a great defender. Although his statistics don’t necessarily reflect that—averaging just 0.8 steals and 0.2 blocks per game—Johnson is a feisty on-ball defender. He has good instincts keeping tabs on the action off-ball, and you won’t have to worry about him getting caught ball-watching.

He’s adept at knowing when to provide help defense, swarming at the right time to help his teammates hold down the paint. Despite not having great length, measured at just a 6-foot-8 wingspan, Johnson remains effective as a defender, using his sturdy frame and physical play to limit his opposition. He rarely gets bullied around.

Keldon Johnson with the strip leading to the finish by Tyler Herro on the 3-on-1 break. pic.twitter.com/XLMeuGCECA

KJ can play either the two or three in the NBA, and he can guard a variety of positions as well. He can take on one through three, and some small-ball fours. In today’s game, defensive versatility is a must—Johnson certainly fulfills that requirement, while adding solid rebounding into the mix.

Inconsistency: When Johnson is on, he’s on—the inverse isn’t so great to watch.

It’s no secret that Johnson is an up-and-down player at times. There have been instances where Johnson was virtually a non-factor, struggling with inefficiency and scoring.

Against Georgia, on January 15th, he didn’t log a single point through 27 minutes of action. In back-to-back late February games against Missouri and Auburn, he went a combined 4-of-14 on the floor and scored 13 points.

Pundits have  criticized his inability to show up for the “big games,” especially alluding to an ice-cold performance against Alabama in the SEC Tournament quarterfinals, as well as every game of the NCAA tournament—excluding the opening round—in Kentucky’s run to the Elite Eight.

He’s had his share of great performances as well, most notably a 21-point outing against then-ranked no. 9 North Carolina. After teammate Ashton Hagans had a strong message for him, he followed up with a 20-point game on 7-of-11 shooting against Auburn on January 19th. He was instrumental in unseating Tennessee, when the Volunteers were ranked first in the country, going 8-for-14 en route to a 19-point contribution in the win.

Johnson has to find greater consistency at the free throw line. This past season, he converted on just 70.3% of his foul shots. It’s not a great percentage, especially when you factor in how often he gets to line as someone who primarily attacks the basket. According to KenPom, he had the eighth-highest free-throw rate among guards and wings in the SEC. He’s going to need to polish his mechanics at the next level.

Mental Mistakes: Johnson isn’t that great a playmaker, finishing with an even assist-to-turnover ratio, amassing 60 assists and 60 turnovers throughout the season. He’s prone to playing out of control at times, forcing shots and passes, and turning the ball over at a less-than-desirable rate.

Although he’s a crafty player and finisher overall, there are times he goes much faster than he can handle and tries to do a bit too much—losing control of the ball, getting stripped as he rushes to the basket, or forcing an ill-advised shot.

Apart from his turnover issues, shooting slumps can hurt his confidence, often hesitating before passing an open shot opportunity. If he can improve on his consistency, this second-guessing might be behind him as he gains more confidence. Even when the shots aren’t falling, he needs to let it fly when he has wide-open opportunities.

It would be shocking if the Knicks are in a position to grab Johnson, as he is projected to be a mid-to-late first-round pick.

However, as all Knicks fans know, you have to be prepared for the unexpected. New York would have to trade back in order to pick him. It’s hard to imagine a situation where the Knicks would actually make such a move, and what terms would be involved.

Some mock drafts have him leaving as early as the last few picks in the lottery, while others have him dropping as low as the 20s—with many others predicting him to fall somewhere in-between.

He’s an intriguing player—your prototypical 3-and-D on the surface, but with so much more if you dive deeper into his game. Aside from his limited length, most of his shortcomings and issues are fixable. He has great upside as a scorer and defender, combined with his rebounding and high motor.

There are many teams out there that can use a two-way player on the wing like Johnson.