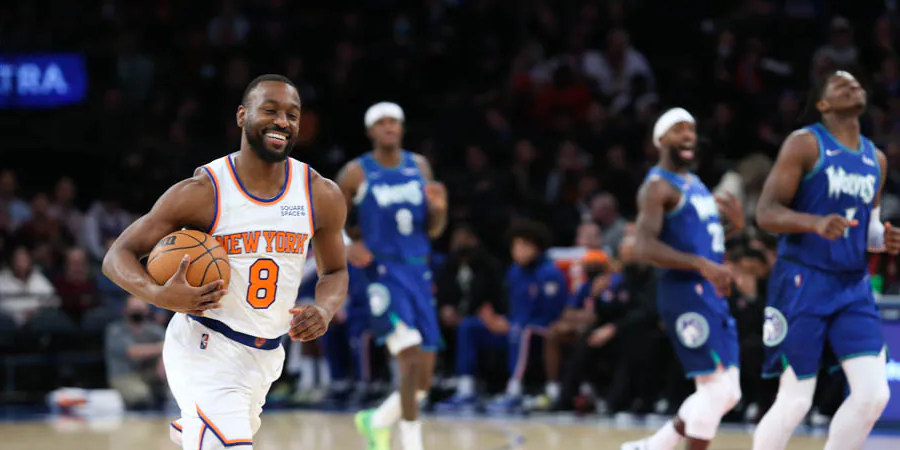 Kemba Walker and Evan Fournier provided big scoring outbursts against the Timberwolves. Unfortunately, they and the Knicks couldn’t finish the job.

NEW YORK, N.Y. — After a poor showing in the annual Martin Day Luther King Jr. Day matinee at Madison Square Garden versus the Charlotte Hornets, the New York Knicks dropped another home game after winning the previous five. This time the heartbreaking defeat came at the hands of coach Tom Thibodeau’s former club, the Minnesota Timberwolves.

In a very sloppy first half where the Knicks committed 13 turnovers, including eight in the first quarter, they headed into the half with a 10-point deficit. New York would clean things up, erupting for a 40-point third quarter and avoiding any turnovers. That’s where the fun ended, as the Knicks ran out of gas late and let the game get away from them in the final minutes.

Kemba Walker, who was seeing his first action in nine games, finished the game with 19 points for the Knicks. “I felt good. It was good being out there with my teammates trying to get a win,” Walker said postgame about playing in the first game in almost three weeks. When asked what his comeback process was like, Walker replied, “Just rest, really. I just needed to rest, I was a little sore for a while. So, it was just only time, really, you know? [Yeah] I wanted to feel good, I wanted to feel good enough to get back on the court and tonight was the night.”

CARDIAC KEMBA AT THE GARDEN pic.twitter.com/lwqapmDKa3

Evan Fournier played a great game. He scored a game-high 27 points, including five made three-pointers but came up short in the final seconds when he had his game-tying shot blocked by Karl-Anthony Towns. “That’s a tough loss, especially as the guy that missed the game-tying shot,” said Fournier of his final sequence of the game. “That’s the type of game that keeps you up at night, you kind of feel like shit in the morning afterwards,” he added.

Thibodeau, who was asked what went wrong to end the game, said “Just turnovers, we had some costly turnover in the last two minutes.” He was referring to a couple of plays the Knicks made with less than two minutes to play; one by Fournier when he had the ball stolen by Patrick Beverley, and the second was a bad pass from RJ Barrett that was stolen by Anthony Edwards.

“They’re trailing, they’re going to gamble for the ball and you got to protect the ball,” Thibodeau elaborated. “There’s a physicality to what they’re doing, and so you got to be strong and understand what’s going on in the game and how it’s being officiated.”

Thibodeau also talked about how the game tights up late. “It’s played differently and it’s also officiated differently,” he said. “So, there’s an intensity to it and you have to understand it’s not the same as the first three quarters, it’s different. So, you have to adjust accordingly.”

This was a tough one to lose for the Knicks after such an exhilarating third quarter. Unfortunately, with the combination of sloppy play and a couple of foul-outs, the Knicks weren’t able to overcome their missteps in what would’ve been one of the more thrilling wins of the season. Next up on the homestand, the Knicks welcome a very beatable New Orleans Pelicans team.