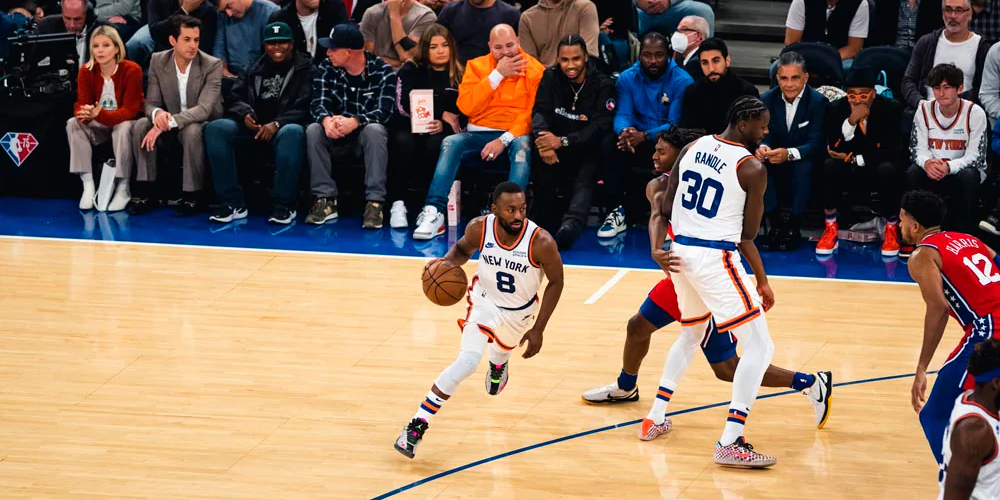 After three quiet games with the Knicks to start his professional career in New York, Kemba Walker scored 19 in a blowout win over the Sixers.

NEW YORK, N.Y. — After scoring no more than 11 points in his first three games as a Knick, Kemba Walker emerged as the leading scorer tonight with 19 points while dishing out five assists. Walker struck hot from behind the three-point line, knocking down five of his 11 attempts from there.

Head coach Tom Thibodeau knew the time was coming for the Bronx-native Walker, as he expected a solid performance from him to coincide with a cohesive team effort. That’s just what the Knicks delivered on tonight, stringing together a playoff-caliber performance against last year’s top seed in the Eastern Conference, the Philadelphia 76ers.

“You don’t do this individually. You do it collectively,” said Thibodeau before tonight’s game. “We need everyone to play well, so it’s not falling on Kemba. Kemba is a good player. We know that. We’re still finding our way. Just be who you are.”

Walker shined in his 28 minutes of action played, putting together a plus-three in his time on the court. The 10-year NBA veteran had failed to finish with a plus-score in any of the three games prior, struggling with a minus-14 in Sunday’s loss to the Magic. That game saw Walker play just 19 minutes compared to the 28 played by second unit point guard Derrick Rose.

That spread went more in Walker’s favor tonight, as he outplayed Rose 28 minutes to 20. Walker was held scoreless in the first quarter but poured in 10 consecutive points in the second on a perfect 4-for-4 shooting performance from the field, including 2-of-2 from three-point range. His remaining nine points came in the third quarter on 3-of-4 shooting from behind the arc.

“I was just trying to take whatever the defense gave me,” said Walker after the game. “My teammates did an unbelievable job at setting great screens for me. Taj (Gibson) and Mitch (Robinson), even Julius (Randle), set some great screens for me and I was able to get to my pull-up. It was just dropping.”

Thibodeau alluded to some growing pains for Walker, knowing that any player coming to a new team needs time to acclimate themselves. He also noted that the new teammates like him would have benefitted from the standard eight preseason games as opposed to the four the team had before this season.

“The young guys are your young guys, your draft picks. It takes them time because they’re adjusting to the league. Kemba and Evan know the league, so it’s a matter of them getting comfortable with their teammates. The only way you get that is by playing.”

Walker knows that performances like this from himself, Rose, and the rest of the supporting cast will be what keep the Knicks in competition with top-tier teams like the Sixers. Aside from Walker, four other Knicks scored in double figures, and all 10 players to enter the game scored a minimum of four points.

“It takes pressure off a lot of the guys, especially guys like Julius, who has to do a lot sometimes,” said Walker. “We want to take the pressure off him, get him some easy opportunities, and then play off him, as well.”

This all happened on a night that came as a bit of a homecoming for Walker, as a number of the former Rice High School standout’s family and friends were present in the crowd.

Walker will try to keep up the momentum from this breakout game on Thursday, as the Knicks head into Chicago to face a 4-0 Bulls team.