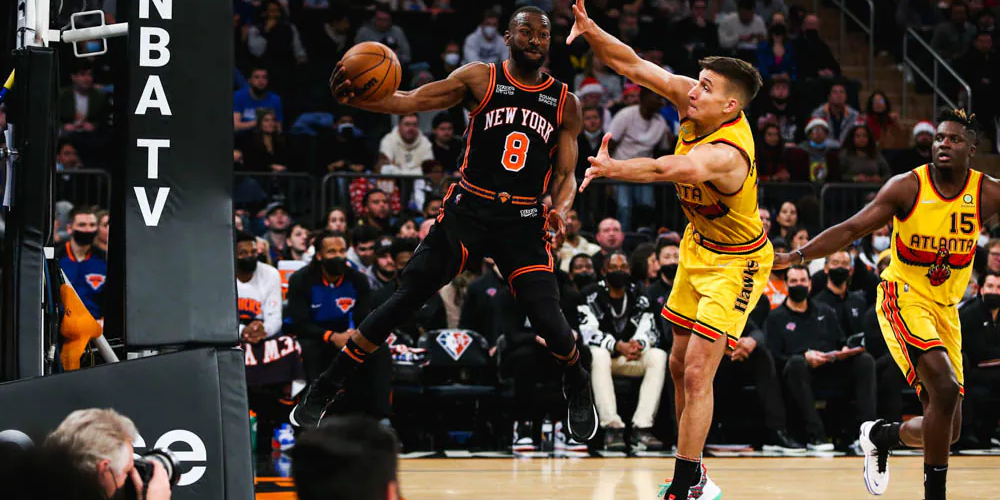 The Knicks delivered presents to fans at The Garden on Christmas Day, beating the Hawks with some history made, too, by Kemba Walker.

After a disappointing loss versus the Bradley Beal-less Washington Wizards, the New York Knicks (15-18) welcomed the Trae Young-less Atlanta Hawks (15-17).

New York got off to a hot start in the first quarter. They looked like they wouldn’t miss a shot hitting their first six shots to build a comfortable 16-point lead in a first quarter where they connected on seven three-pointers. New York coasted to a comfortable wire-to-wire victory, holding Atlanta to under 90 points on a rare Christmas Day win, 101-87, making up for the last time the Knicks played on Christmas, in 2018, a 109-95 loss to the Milwaukee Bucks.

Atlanta came into Madison Square Garden with six players in health and safety protocols. They most recently signed native New Yorker and NBA veteran Lance Stephenson to a 10-day hardship exception contract. Stephenson still just 31 years old had been out of the NBA since 2019.

Kemba Walker continued his excellent play as of late, stealing the headlines in his fourth game since returning to the rotation. Walker, looking to regain his vintage form, was stellar, tallying his third career triple-double he first since 2014, and the first Knicks triple-double on Christmas Day. He becomes just the seventh player in league history with a Christmas Day triple-double. Oscar Robertson did it four times. Walker would finish the game with 10 points, 12 assists, and 10 rebounds.

Julius Randle also found his stroke in this game and was money from three-point range after not making any in the previous contest versus Washington. Randle would connect on six three-point goals; Randle would end the game with 25 points and 11 rebounds. Randle wasn’t the only Knick hot from behind the arc, as the team put on a laser show, hitting 20 treys in the game.

Quentin Grimes returned to the lineup and didn’t miss a beat following his career game against the Houston Rockets. The rookie wing continued to show his sharpshooting skills, hitting five from behind the arc. He’d finish the game with 15 points. In his first game back from protocols, RJ Barrett struggled, shooting 4-for-15 and 1-of-8 from three-point range.

The Hawks struggled all game to get into a rhythm as the Knicks held them to 37.9% shooting collectively. It was a grind for the Hawks without Trae Young; Clint Capela was held 2-of-7 from the field; Bogdan Bogdanovic also had a rough day, shooting a ghastly 2-for-12. Barrett’s fellow Dukie Cam Raddish mirrored his former college teammate’s game, shooting 4-for-15 from the field to go along with an identical 1-for-8 from long range. The one bright spot for Atlanta was Delon Wright, who finished the game with 20 points. He also gave the Knicks trouble from distance connecting on four of his five attempts from three.

The Knicks hope to build on this feel-good victory as they travel to Minnesota to face a struggling Timberwolves squad that will be with Karl-Anthony Towns as he has also entered health and safety protocols. New York can end December with a flurry of victories against the lesser teams left on the schedule for the month and head into the New Year with a new lease on the season.