Kemba Walker Is Home, and the Knicks Have Finally Answered Their Evergreen Question 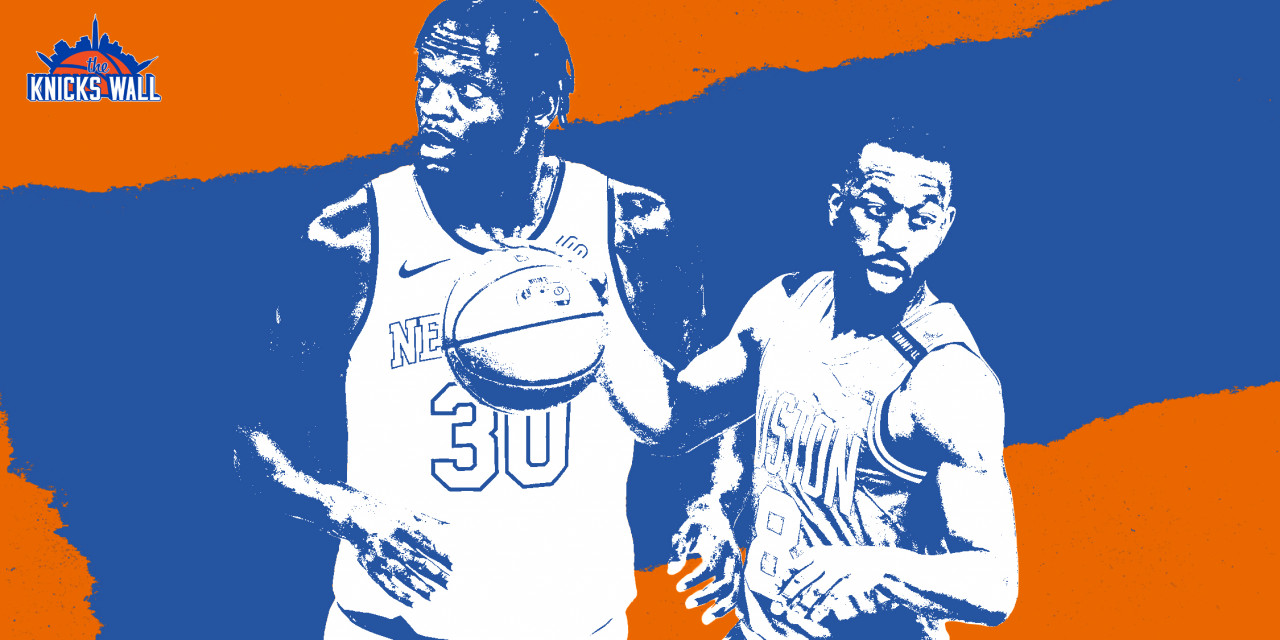 New York City has its prodigal point guard again. Kemba Walker is finally a Knick, and he arrives at the perfect time.

It felt like home when Walker led Harlem’s Rice High School to victory over his new teammate, Derrick Rose, and Chicago powerhouse Simeon Career Academy, 53-51. It felt like home even when he relocated to Storrs, Connecticut, using the Garden stage to ascend from a local legend out of Soundview section of the Bronx into a national superstar known from coast to coast.

Walker’s star did not stop rising after that memorable 2011 title run. He would go on to be a top-10 pick and the face of the franchise for the rebirth of the Charlotte Hornets. Walker has appeared in four All-Star games, will eclipse $200 million in career earnings, and through it all has never changed; he is the same Kemba Walker he was rising through the NYC hoop ranks.

Familiarity is what makes Walker’s arrival that much more special for Knicks fans. A kid from the neighborhood will once again lead the city’s team. The fit is as strong from a sentimental standpoint as it is an on-the-court fit. Not since Stephon Marbury has New York had one of its own be a prominent player on the Knicks. This is not slander to Carmelo Anthony, but being able to see guys like Marbury and Walker play high school in New York and AAU (or the equivalent) before that adds a little extra to the homecoming.

Similar to Marbury—born and raised in Coney Island, Brooklyn, and attended NYC powerhouse Abraham Lincoln High School—“Kemba” was a name people around the city knew well before he made Gary McGhee get down on one knee at MSG. And just like Marbury, Walker did not forget about New York once it was time to leave the nest.

By all accounts, Walker remains a low-key person who hangs with the same people he grew up with. His flashiness is restricted to the court; off the court, friends say he prefers to keep it quiet with close friends and family. As Emanuel “Book” Richardson, director of operations for Walker’s former AAU club, the New York City Gauchos, described to SNY, Kemba is “a blue-collar kid from a blue-collar family with a blue-collar work ethic. He’s the epitome of New York City and the New York Knicks.”

Walker came up playing for Gauchos, whose headquarters now lie in the shadows of Yankee Stadium, moving on to Rice on his way to becoming a five-star recruit and the fifth-ranked point guard in the 2008 recruiting class. That type of resume suggests that Kemba was viewed as the next big thing out of New York like Marbury or even Sebastian Telfair.

Luckily for Walker, he was never burdened with the “next great NYC guard” hype. Conversely, at each level, Walker was a pleasant surprise, an “overachiever that became a star” as former Seton Hall head coach Bobby Gonzalez told SNY’s Ian Begley.

“From knowing the kid when he was young, do not bet against him,” Gonzalez, who recruited Walker, said. “He’ll take them from where they are now to the next step, to where they’re not just in the first round, they’re competing beyond that. That’s his makeup, that’s his nature, that’s who he’s always been—since Rice High School, the Gauchos, UConn.”

The Knicks are hoping that Walker has another surprise hidden up his sleeve.

As great a person that Walker is, there is reasonable concern his knee trouble may never allow him to be that prolific water-bug scorer hoops fans have come to know. The good news, for Walker and the Knicks, is expectations are not as gargantuan as the expectations Marbury faced when the Knicks traded for him in 2004.

I belabor the Marbury point, not because both are scoring guards out of NYC, but because of the mistakes made with Marbury’s homecoming. Marbury was doomed upon arrival when he came home, being tasked with resuscitating a franchise still trying to find themselves following the prosperous Patrick Ewing era.

Marbury signified hope. The problem is the team around Marbury was not worth remembering outside of Jamal Crawford and Channing Frye. The Knicks never had success in Marbury’s time as a Knick other than his first season when the team made the first round of the playoffs, not returning until well after Marbury had moved on to China.

Walker comes into much better conditions at the Garden, albeit in a similar situation in which the Knicks are looking to restore a winning culture.

The Knicks are coming off a surprising turnaround, led by a stable core headlined by Julius Randle and R.J. Barrett. There is already a reliable bench mob captained by Derrick Rose, a willing apprentice in Immanuel Quickley, and a head coach who knows how to lean on his veterans in Tom Thibodeau. And most importantly, Walker is arriving in a locker room with an established culture that matches his blue-collar ethos.

There will be none of that “savior of the Knicks” pressure—a title that sounds more appetizing than it actually is. Instead, Walker will be asked to slide into the vacancy left with Elfrid Payton’s departure and do what he does best: put in the work and score the basketball.

Tom Thibodeau has had one simple ask for the front office: a star player. To be relevant in title contention, having a star player is the bare minimum requirement. While some believe Walker is past his prime, he is still someone who can get you 20 points a night and is the closest thing to a star player the Knicks could have hoped of acquiring this offseason.

One misconception that Walker may dismiss immediately, but assuredly over time next season, is that his production on the court remained strong. Availability was Walker’s unconquerable enemy in Boston. In 99 games for the Boston Celtics, all starts, Walker averaged 19.9 points per game on 42.3% shooting from the floor and 37.2% from deep. In his only true postseason for the Celtics, he averaged 19.6 points per game on 44.1% from the field and 31.0% from deep.

The Knicks could proactively address any injury concerns by putting Walker on the Kawhi Leonard plan, with scheduled rest days to ensure he is healthy when the team will need him most, late in the season.

This is where the depth created at guard prior to Walker becoming available will benefit the team, and ease the pressure for Walker to play a ton of regular-season games. Immanuel Quickley has seen nothing but point guard reps in two summer-league games, Rose played like a starting-caliber point guard, and Barrett has proven capable of spot minutes as the lead guard. The point is, the Knicks have options on nights Walker needs rest.

When he does play, the Garden faithful will be treated to a sight that had become foreign—a point guard who has the ball on a string, can pull up from anywhere on the floor, and finesse buckets at the rim. All these things were nonexistent and have been sorely missed from the starting lineup for far too long.

There is still not a mathematical figure yet discovered to quantify the upgrade from Elfrid Payton to Kemba Walker. The best explanation could be that images like this will never happen with Walker on the floor.

please stop this. I want more for us. https://t.co/6J18cIpzP5 pic.twitter.com/NsWL9RvMDK

The lack of scoring at point guard flared up the spacing amongst the starters, especially on nights Reggie Bullock struggled to hit from deep. Having a point guard who could double as a top two or three option on the team felt like a pipe dream deferred (yet again) after Chris Paul and Kyle Lowry signed elsewhere at the start of free agency.

Walker fills this need and for a fraction of the cost. The details are still being hammered out on Walker’s deal, but a two-year deal for $8 million annually seems to be the consensus.

The mere threat of Walker will open up the floor for Barrett to continue his evolution as a driver, and for Randle to do whatever he damn well pleases, all paramount to the Knicks operating at optimum levels. Walker’s ability to attract attention will create fits for the opposing defense that they did not have to account for when they game planned for the Knicks last season.

Walker’s true value will come late in games. The Atlanta series exposed the Knicks’ glaring need for a closer. Randle struggled when the game slowed down and the defense knew he was getting the ball. He can still grow into the role, as could Barrett, but Walker has the disposition to close right now.

It is rare for the Knicks to pull off a pleasant surprise. The rule of thumb in past regimes was that if a surprise move was made, it was almost always an unmitigated disaster. It’s even rarer when that surprise fills the two biggest holes plaguing the team.

Kemba Walker has represented the best of New York City his whole life, now he gets to represent New York City every night and help lead the resurgence of the city’s sleeping sports giant.

Kemba Walker is finally home, and not a moment too soon.

»READ: Quentin Grimes, Knicks a “match made in heaven,” according to rookie