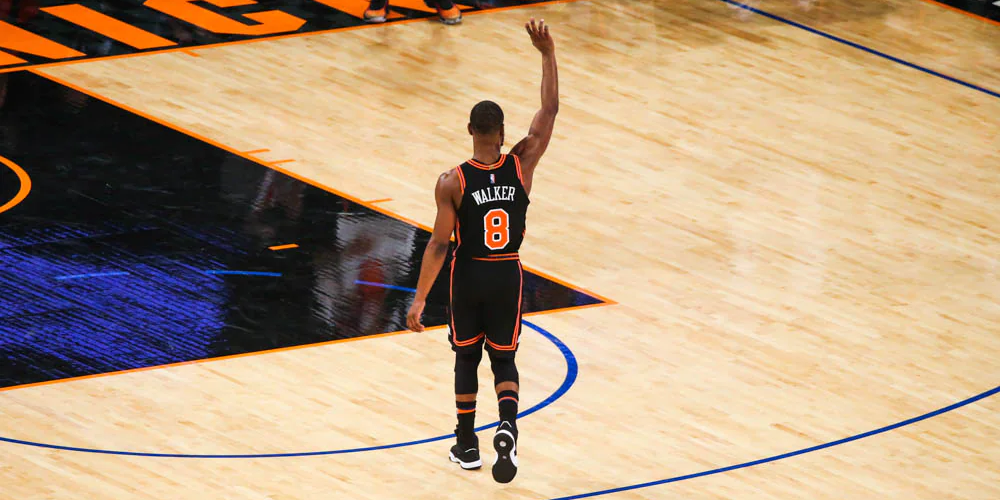 New York native and Knicks point guard Kemba Walker earned the NBA’s Player of the Week honors for the eighth time in his career.

Kemba Walker had one hell of a week. Fresh off exile, the former All-Star point guard has done everything in his power to remain on the floor.

Walker performed even greater than any expectations one could’ve had when he signed with New York. In three games, he averaged 25.0 points, 9.0 rebounds, and 8.3 assists per game as the Soundview native has now made a compelling case to head coach Tom Thibodeau that second chances do work.

For his performance, Walker is the Eastern Conference Player of the Week winner, the NBA announced on Monday.

His week started off with a 25-point performance in a home win over the Detroit Pistons. Walker hauled in eight rebounds and dished out five assists to set the trend for a prolific week.

He followed that up with the best individual performance of the Knick season—a 44-point masterclass that included nine rebounds and eight assists to zero turnovers in a loss versus the Washington Wizards.

The performance felt more than a strong outing, but a reawakening of “Kemba.” Suddenly, Kemba looked like Kemba. It started simple enough with, the offense started to flow through Walker instead of Julius Randle. The involvement has paid dividends. The scoring will never surprise you with Walker, but 9.0 rebounds a game for 6’0” speaks to his increased effort levels.

Ironically enough, his most impressive game happened to be the one he shot 3-of-12. Walker made history against the Trae Young-less Atlanta Hawks. He may have scored just 10 points, but dished 12 assists and hauled in 10 rebounds once his teammates noticed how close to history he was.

HISTORY MADE BY THE NEW YORK NATIVE 🅱️❌ pic.twitter.com/Jrn38wmK5f

Kemba Walker became the first Knick to ever record a triple-double on Christmas Day, and the seventh player to do so in league history.

The rejuvenation of Kemba, capped off with Player of the Week honors, now puts the Knicks in a good position to climb out of the hole they dug with early-season struggles. Kemba is back in the starting lineup where he belongs, just as the Knicks are heading into the softest part of their schedule.

If Walker’s confidence and level of play can prove to be sustainable, the preseason excitement of Kemba’s arrival can continue to materialize.

»READ: Kemba Walker shows up when the Knicks need him most

»READ: The Knicks are going back to the beginning