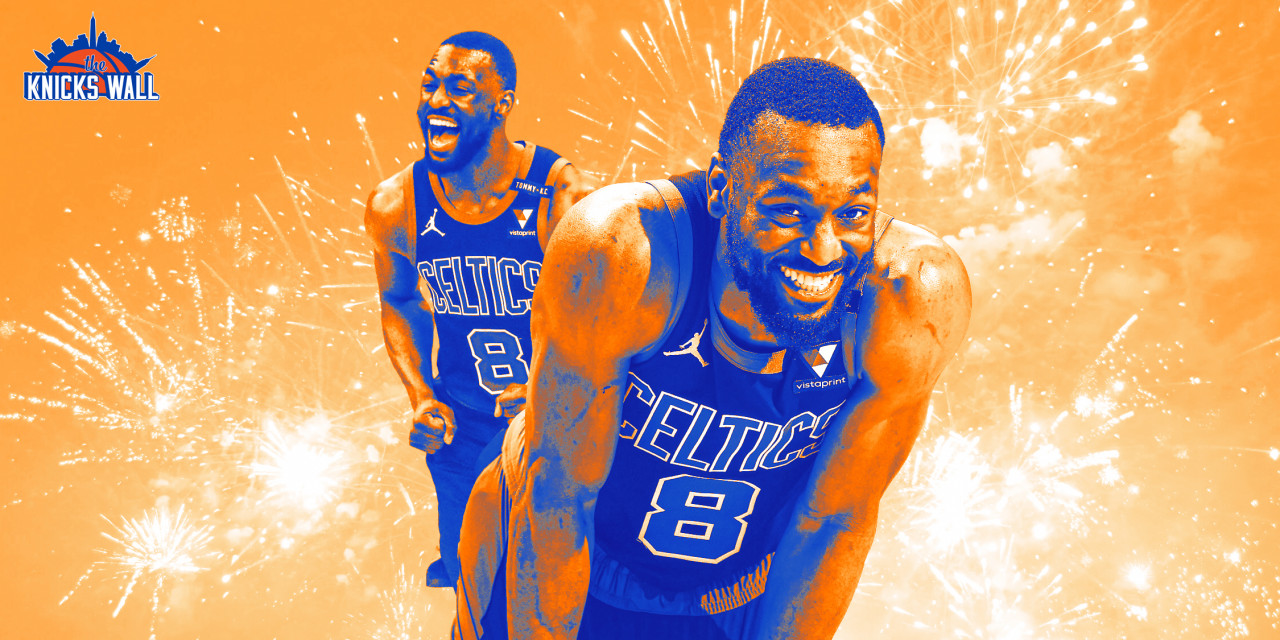 Adding Kemba Walker in free agency gives the Knicks an effective starting guard who can score on all three levels and work off of Julius Randle.

Before Wednesday, the New York Knicks offseason looked “meh” at best. The addition of Evan Fournier aside, the Knicks largely returned a core that won 41 games and was viewed as a team that mostly overachieved. Then, the Knicks got Kemba Walker. According to ESPN’s Adrian Wojnarowski, the Oklahoma City Thunder will waive Walker, which will allow him to sign with New York after the free agency moratorium is up on August 6th.

Suddenly, the Knicks offseason makes a bit more sense. The combination of Walker and Rose at lead guard is a veteran one, it’s one that dealt with injuries throughout their careers, but a two-person combination the Knicks haven’t seen in decades. It adds another starter in a now-loaded roster, with 10 guys making a functional rotation for Tom Thibodeau. Sliding Rose back into a sixth-man role who can come in and push the pace is essential. Walker provides two things: rim pressure and pull-up shooting.

The lack of getting to the rim was apparent on the Knicks roster, with Rose being the only true threat of attacking the basket. Enter Walker, who, before last season’s injury-riddled season, did well getting to the hoop. Walker finished with 10.9 drives per game, per NBA.com, shooting 47.7% from the field on drives. Not only was he good at attacking the basket, but he was good at limiting the mistakes on attacks, too, finishing with a turnover rate of 5.7%, the 12th-lowest figure among players with 10 or more drives.

The pull-up shooting is also in Walker’s arsenal. The Knicks valued pull-up shooting and players who can create their own shot in the draft with the selections of Deuce McBride and Quentin Grimes, and the signings of Walker and Fournier demonstrated the need to turn shotmaking into a strength in the offseason. Walker only adds to that improvement on that end. The 2020–21 season was rough for Walker, but the 2019–20 one saw him shoot 39.7% from the field and 36.5% on pull-up threes. A vast upgrade from the likes of Elfrid Payton and Frank Ntilikina.

And let’s not ignore Walker’s ability to work as a catch-and-shoot option. With Julius Randle present at power forward, players around him will still need to know how to operate around Randle and shoot the ball. Walker fits well in that area as well. Last season, Walker shot 40% from the field as a catch-and-shoot guy, but more importantly, Walker knocked down 39.3% of his catch-and-shoot attempts from three. Rim pressure, pull-up shooting, and shooting on the catch—the Kemba Walker addition is an improvement on all levels.

There aren’t many question marks about this move when considering the price, but there are two. The first is the vitality of Walker’s knee. The Celtics juggled his minutes and game time to ensure they were getting the best Walker when they needed him, but it didn’t work. Then, they traded him to the Thunder in a salary swap for Al Horford. The Thunder, who sold the idea of flipping him again, couldn’t find a taker for Walker, allowing the Knicks to pick him up after they release him. It will be interesting to see just how healthy Walker is and how the Knicks, and Thibodeau, work with him and his knees.

The second is the minutes of the kids and Immanuel Quickley. Starting with Quickley, his spot in the rotation is secured, but the avenue to point guard minutes is almost closed, thanks to the signing of Walker and the return of Rose. With Fournier, Alec Burks, and R.J. Barrett all ahead, Quickley’s minutes will be interesting to monitor to start. The same for rookies McBride and Grimes—both of which may see time in Westchester to get playing time early.

The addition of Kemba Walker gives New York a starting lineup and a legitimate 10-man rotation heading into the 2021–22 season. Not only does he give New York another high-level starter (when healthy), but he operates at all three levels offensively and could work as an off-ball threat alongside Julius Randle. The health will be the biggest question, coming off knee surgery and numerous knee issues last season, but for a cheap contract, the Knicks could’ve found their home run signing.

»READ: Knicks mid-tier free-agent targets to round out up-and-up team