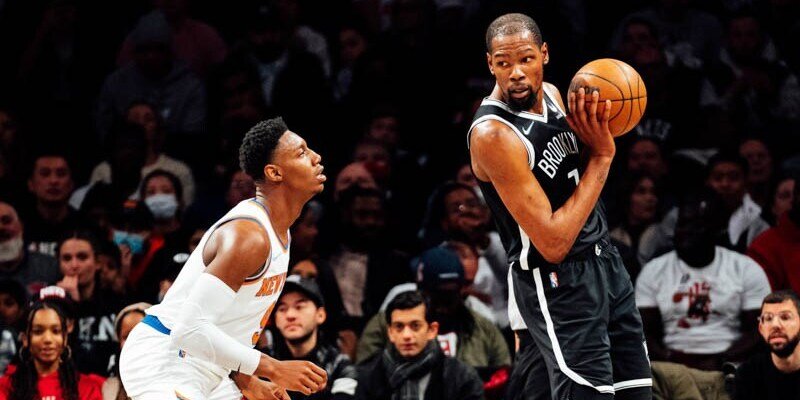 Kevin Durant had it going on in Sunday’s matinee in Brooklyn, with the Nets coming out on top over the Knicks.

The New York Knicks (28-40) dropped a contentious game to the Brooklyn Nets (35-33) by a final score of 110-107, notching yet another matinee game loss. Rebounding really hurt the Knicks early on in the contest, and some late-game heroics from Evan Fournier and RJ Barrett were simply not enough to stave off the Nets and Kevin Durant, who finished with 53 points.

The last time the two teams clashed, it ended in heartbreak with Cam Thomas of the Nets hitting a game-winner that grabbed the victory for Brooklyn. That game was lacking the star power of Kevin Durant and Kyrie Irving, so the Knicks would have to find a way to squeeze out a win over the sharpshooter in Durant who has been back from injury for several games now.

New York was also coming off a loss to the surging Memphis Grizzlies. They put up a decent fight against them on the road, but they succumbed to exhaustion by the fourth quarter and couldn’t stave off the young grit of the Grizzlies squad, who were able to secure the win.

The game began slowly for the Knicks. While the Nets were cutting into the paint with ease, New York was just unable to get anything to fall from mostly from jumpers by Julius Randle and RJ Barrett. It would be difficult to get Mitchell Robinson going early as he was being surrounded by Andre Drummond around the rim. They finally managed to score four minutes into the first off an Evan Fournier long two-pointer, but Brooklyn responded to almost everything. Kevin Durant was especially unstoppable, scoring 16 first-quarter points on New York. Thankfully, Barrett and Fournier were able to buoy the Knicks to keep the score close. After what felt like a dominant quarter from Brooklyn, the Knicks were only down five entering the second.

Jericho Sims started the second quarter with a bang, soaring to the rim for a lob from Barrett. New York had a ton of energy on both ends of the floor with a unit comprised of mostly bench players aside from Barrett. Even as starters trickled back onto the court, the Knicks were outpacing the Nets well into the period. But one area that was pestering the Knicks’ game during the matinee was their rebounding. By the half, they were out-rebounded on the offensive glass nine to four. It led to several second-chance opportunities for Brooklyn, especially for Drummond who was dominating New York in the paint. Even with this disparity, the Knicks were only down two to the Nets at the half, with Barrett leading the Bockers’ scoring with 15 points.

The ball movement for the Knicks was crisp to start the second half, but they still needed to find a way to secure rebounds with Drummond on the floor. Beyond rebounding issues, New York had to find scoring away from just Fournier, who was showing out on national television once again. It became a back and forth scoring affair with Kevin Durant beginning to cook against a lethargic New York defense with just four minutes left to go in the period. After a timeout from head coach Tom Thibodeau, the Knicks looked a bit sharper defensively but were still struggling to contain the Nets’ paint scoring. By the end of the third, the Knicks were down five and looking to stage a comeback at the Barclays Center.

EVAN WITH A HUGE BASKET!! and that Grimes celebration is *chef’s kiss* pic.twitter.com/PCKVfZ8R43

The final quarter started with back-to-back three-pointers from Obi Toppin—back from a hamstring strain—which reduced New York’s deficit back to within one of Brooklyn’s lead. But the Nets climbed back immediately even with Durant off the floor. The lack of rebound security continued to give the Knicks very little to work with as well. They had to find offense somewhere. Enter Fournier and Barrett. Fournier hit a big three-pointer with three minutes to go in the fourth, and after the Knicks’ defense got a stop on the other end of the floor, a layup from Barrett tied things back up in crunch time. Barrett hit another huge layup out of the timeout to give New York a two-point lead with two minutes left. Unfortunately for the Knicks, Brooklyn had an almost automatic shooter in Durant on the court, and he hit a three with under a minute left in regulation to move the Nets back up by three. Ultimately, it was Fournier and a poorly drawn play that led to a turnover by the Frenchman that did New York in, and they lost the contest by three.

New York’s top scorer was Julius Randle, who finished up with 26 points, four rebounds, and four assists. Evan Fournier was right behind Randle in production with 25 points and five assists. RJ Barrett had 24 points and three steals. Mitchell Robinson was relatively quiet in his minutes during the game, only scoring seven points and grabbing five boards with four blocks. Alec Burks was also not impactful, recording just five points. He did have seven assists.

Obi Toppin had eight points and four rebounds in eight minutes of play, which was an encouraging sign as he returned to play from a hamstring injury. Immanuel Quickley had six points, seven rebounds, and four assists during the game, and Jericho Sims had six points and 10 rebounds. Deuce McBride and Taj Gibson spent some time on the court, but neither scored.

New York will finally return home to face the Portland Trail Blazers on Wednesday after a long stretch of play on the road. They’ll try to right the ship as they continue to battle for play-in contention.