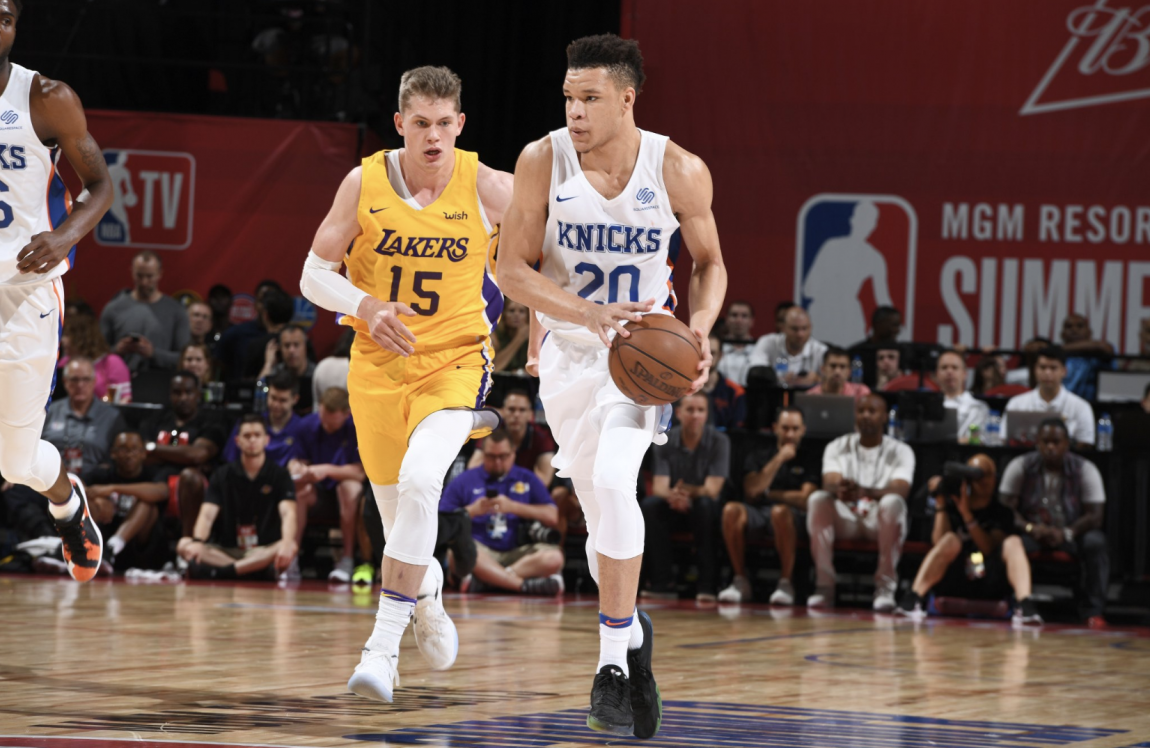 The third quarter was one to remember as Kevin Knox, Mitchell Robinson, and some other young Knicks showed more positive signs.

With Frank Ntilikina out as a last minute scratch due to a groin injury, the Knicks’ highly-touted first round pick looked to hold down “Fort Knox” as the Knicks took on the Los Angeles Lakers in their final Summer League matchup prior to tournament play.

Hold it down he did.

In a game where the Knicks trailed all the way until the fourth quarter, Kevin Knox led the squad in a ferocious third quarter comeback. However, it wasn’t enough, as the Lakers caught fire in the fourth en route to a 109-92 victory.

Let’s dissect what we saw.

FORT. KNOX. It looks like the Knicks hit a home run with their first round selection. Kevin Knox had his best game by far in an already impressive summer league showing, posting a team-high 29 points along with 9 boards. Knox was the catalyst to the Knicks 17-0 run in the third that saw them tie the game after trailing by 25. If you haven’t already jumped on the Knox bandwagon, do it now. Except for the little crying Knicks fan… please go away.

KEVIN KNOX IS ON ??? pic.twitter.com/dUvqDryTGx

Does this guy ever stop hustling? The “roadrunner,” as I like to call him, was all over the court on Tuesday night and finished the contest with 15 points. The play that summarized his hustle came on his own missed free throw. After the Lakers secured the rebound, Williams darted in and stripped the ball before taking it to the hoop for a ferocious dunk. This type of perseverance can go a long way for the Knicks, as Williams is a player who sets a positive tone for the rest of the team.

Right before I considered turning the game off (seriously), the Knicks decided to make a run for the Summer League Ages. After trailing by 25 points, the Summer squad went on a 17-0 run that ultimately brought the game to an even 78 heading into the fourth quarter. The energy flowing between the players during this run showed a glimpse into what should be an exciting year for the Knicks.

Personally, I am a big Frank Ntilikina fan and was most intrigued to watch his development this summer. After watching him play more aggressively against Utah, I was looking forward to how he would fare in the following matchup. In a selfish way, it was disappointing to see that he was a last-minute scratch before tip-off. However, it only makes sense to rest him when he’s hurt. I’m hoping it’s not too serious and we will see him back in action during tournament play.

At one point in the early third quarter, the deficit for the Knicks got all the way to 25 points. Poor all-around defense and bad shot selection led the Knicks into this troubled territory. Sloppy play, including seven turnovers from the star of the night Kevin Knox, put them in a bad hole. Luckily, their run late in the third quarter got them out of this mess, only to get back into it during the fourth.

I’m sure many of you didn’t even know who he was prior to the game, and I’m right there with you. Watson was selected by the Westchester Knicks in the first round of the 2017 G League Draft after going undrafted in the NBA Draft. With Ntilikina scratched from the lineup, the 6-foot-7 guard was given the starting nod at the point. I thought this was a perfect opportunity for Watson to showcase his talent, which he failed to do. In 13 minutes of play, Watson was nonexistent on the court, going 0-3 from the field with his two points coming from the charity stripe. Not a great showing from the Fresno State product.

The Knicks will play the Celtics on Thursday at 4:30 ET in their first taste of tournament play.

If You Missed It

Mario Hezjona was officially introduced by the Knicks today and was given No. 8 for the upcoming season. This all but solidifies the end of the Walking Bucket’s glorious year in the Big Apple.