Kevin Knox Has Had a Strange 2020 So Far 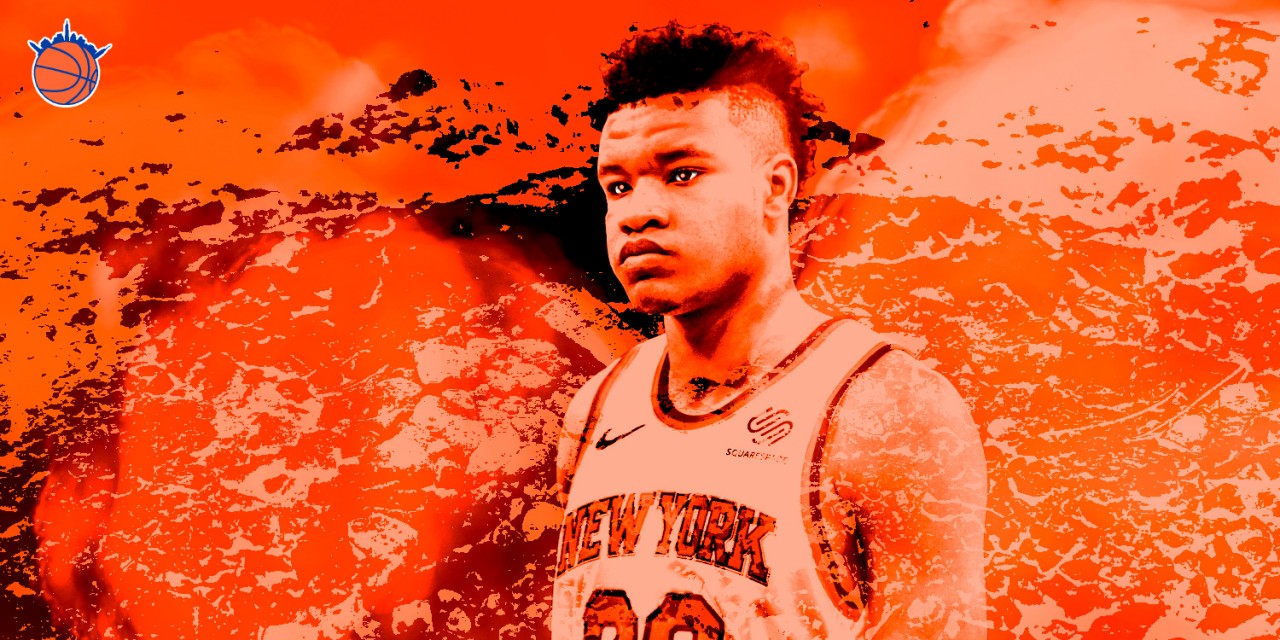 Kevin Knox turned it up on Sunday against the Heat after six straight games in the new year looking quite bogus. What gives?

It’s been an interesting decade so far for Kevin Knox.

2020 started off well for the Knicks with a blowout over Portland (Knox had five points, seven rebounds and was a +14). Then—like a Don Draper California excursion—things got weird for Kevin on the west coast.

Before the first game of the four-game swing, SNY published an interview with veteran trainer Mark Edwards, who worked with Knox last summer:

“Kevin has All-Star potential. You just need to give him a chance to grow. His body is still developing. His mind is still catching up to the speed of the game. Things are going to start becoming more instinctive for him.

“He will be fine. He’s building on his foundation every day. He’s in the gym every opportunity that he can be. He’s there getting shots up. He’s working.”

Notably, Edwards also mentioned that Knox suffered a knee injury over the summer and fell behind on his training. “I think where he is now athletically is where he would have been without the injuries…But now I think he’s fully, 1,000 percent healthy and he’s ready to go.”

The timing of the interview was random and weird, and Knox didn’t exactly validate those sentiments on the road trip. He scored three points in the January 5th loss to Phoenix, then was benched for the entirety of the second half of the 135-132 loss to the Clippers (he had two points in six minutes for the game). The Knicks dropped all four contests out West, and Knox’s performance—or lack thereof—was worrying. Knox struggled in the next game against the Lakers, shooting 1-of-7 in 19 minutes, including 0-for-4 from the line.

Knox is bad I’ll admit it

A year prior, after a promising Staples Center debut, the New York Post reported that Knox literally still had room to grow—potentially up to 6’10″. Instead, Knox has mostly regressed—both basketball-wise, and physically—he’s now listed at 6’7″. If he’s not going to get taller, is there at least room for his game to grow?

Part of his decreased role (19.6 minutes a game, down from 28.8 last season) can be blamed on the glut of power forwards on the roster, relegating him to a bench role. To his credit, he seemed to approach it with the right mindset: “The most important thing for me is coming in and giving energy, steals, blocks and make winning plays on the defensive end. I can score by getting to the rack,” Knox told the Post.

Disconcertingly, his game hadn’t backed up his (nor Edwards’) words (until Sunday night—more on that in a sec). In particular, his effort and his finishing has to be so much better.

Knox’s offensive confidence had been noticeably shook as of late. Despite the smooth stroke, he’s hit just 37% of his shots for the second straight season, and 33.1% from deep (.456 eFG% overall). He’s too content to lag behind the three-point line for full possessions and settle in the corner, and he rarely cuts hard. His screen-setting can be ineffectively lazy.

The road trip also reinforced why David Fizdale and now Mike Miller limited his minutes for (mostly) defensive reasons. Knox is often loafing out of position, easily beat off the dribble, and seems generally half-committed to that end of the floor. Unlike Larry David’s fashion sensibility, the “Half Is More” approach doesn’t fly in NBA defense. When asked about Knox’s defense on Friday, Miller politely complimented his length and athleticism without actually praising his defensive skills.

Knox ended the road trip with six points on 2-of-10 shooting in Utah. Per my count, he failed to touch the ball on 27 of his 55 possessions on the court, and most of the touches he did get were quick and far away from the basket. For all the talk about effort being fully health again, Knox was simply a non-factor, a bystander.

Friday night’s 2-for-8 showing versus New Orleans back at the Garden put Knox at 9-of-35 from the field in 2020, marking nine straight games without scoring in double-figures.

Refreshingly, Sunday was a different story. He awoke for 17 points (6-of-8 from the field, 2-for-4 from deep, +4), including a 12-point second-quarter surge that kept the Knicks in the game. He looked much more aggressive, and his body language was easily the most promising it’s been in the new year.

A few weeks ago, The Knicks Wall’s Dylan Burd wondered whether Knox was a bust, and it looked like he could use a G League stint. I’m not here to make a conclusion or assessment one way or the other; I’m hanging onto Knox stock due to his youth, stroke, potential versatility, and my memory of witnessing him go toe-to-toe with Giannis last season. For now at least, Sunday offered some overdue positivity amidst his inauspicious start to the decade. Hopefully, the trade deadline opens minutes for the young guys, and we’ll see a more confident and consistent Kevin going forward.