Kevin Knox Will Be the Knicks’ Development Staff’s Greatest Test 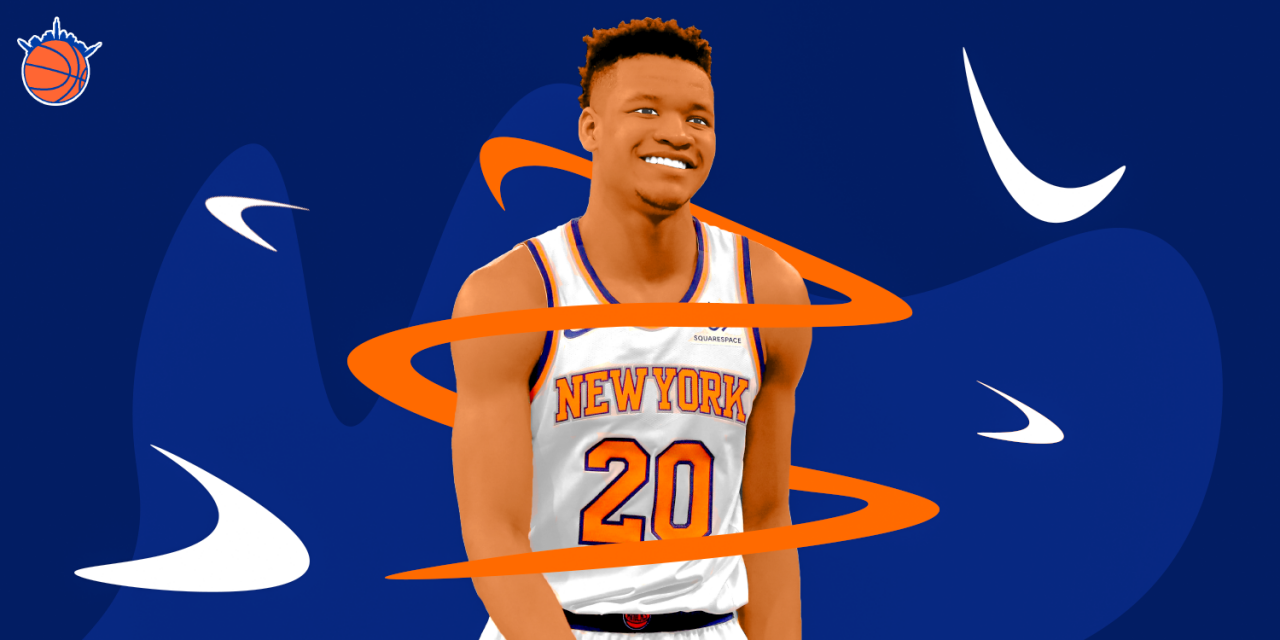 A string of puzzling performances from Knicks rookie Kevin Knox is complicating how the 19-year-old fits into the franchise’s future.

Over the last two years, the Knicks have used a pair of top-10 picks and a high second-rounders on young players considered to be major projects, according to general draftnik consensus. It makes sense—a team desperate for talent needs to either take home run swings (Kevin Knox and Mitchell Robinson) or trust that under their development staff, a flawed but promising prospect can put the pieces together to become something more than what’s expected (which, alongside some polygonal reasons, seems to be the case with Frank Ntilikina).

There’s just one problem with that plan. It’s a problem that has plagued the Knicks for years; one that, in conjunction with how free agency turns out this summer, will determine if the talk of the team’s new culture is more of the same old lip service or is actually something tangible and real.

Standing right at the heart of it, with his smooth jumper and big-ass forehead, is Kevin Knox.

The problem, simply put, is that the Knicks have historically sucked at development. A shocking statement, I know, but sometimes hard truths must be told. Remember Landry Fields? Poor, sweet, First-Team All-Rookie Landry Fields, Jeremy Lin’s Ivy League BFF, who started all 82 games for the Knicks in that last pre–Carmelo Antony season and then, when his sophomore season rolled around, had a shocking revelation:

By the end of his fifth season, he’d washed out of the league. He’s now a collegiate scout for the Spurs.

Now clearly, not all of Fields’ career failures can be blamed on the Knicks—he was the 39th pick for a reason. But he is a ready-made example of the trajectory that so many New York prospects have followed.

The rare years in recent memory when the Knicks haven’t sacrificed their picks for laughably doomed plans like Stannis Baratheon committing his daughter to the flames for a crown he’ll never wear (caution: don’t click that link unless you’re looking for a good cry) have been filled with decent picks that either fell by the wayside (remember when Cleanthony Early was going to be the steal of the 2014 draft?) or fulfilled their promise—just not for the Knicks.

The last Knicks draft pick to sign a multi-year contract with New York after his rookie deal was Charlie Ward, who was drafted in 1994.

Fans and pundits alike love to bring up the point tweeted above, which is a pretty damning factoid, especially for a team that for much of the time since has been bad-to-awful. But the problems go deeper than not holding onto their former picks.

Not counting Knox and Robinson, the Knicks have had 12 draft picks since 2008, including second rounders. Of those 12, three of whom were top-10 selections, only two have both a) made it to their second year with the team AND b) improved substantially from their rookie to sophomore year: Porzingis and Damyean Dotson. An argument could be made for Tim Hardaway Jr., who added an extra point and assist per game in his second year, but to me, that’s not enough to qualify as substantial.

Those are two home-grown players in the last 11 years to show real signs of development, the most important of whom…well, we all know the story by now. Time after time, we’ve seen players fail to capitalize on their potential or learn how to mask their weaknesses for more than short, inconsistent stretches; Iman Shumpert comes to mind here as a guy who always seemed right on the cusp of putting it together but never quite got there.

All of which brings us to the Knicks’ most recent top-10 pick. As loath as fans may be to admit it, Knox has had a pretty up-and-down season, with some soaring high points—averaging 17 points and 6.0 assists on 38 percent three-point shooting in the month of December—and his fair share of lows: his defense all season or his 2019 shooting slump. There are stretches when he looks like a future multiple-time All-Star and stretches when mid-career Rudy Gay seems like an optimistic outcome.

“Now wait just a goddamn minute,” you scream in fury. “Why is Knox the ultimate test of Knicks development? Why not Frank? Why not Mitch?”

That’s a great question, me! I’m so happy you asked. Now sit down and listen.

It’s true that both Frankie Smokes and Mitchie Blocks will be big developmental projects for the front office, provided they’re still on the team in six months’ time. But there are some key differences.

Let’s start with Frank. While the French Prince was selected for his great defensive potential, it was also with the knowledge that his destiny was as a high-end complementary player, rather than a star in his own right. After all, “Triangle point guard” isn’t a role that has historically bred MVPs or All-NBA selections.

The idea was that as a lockdown defender with (theoretical) shooting ability and secondary creation, he’d thrive alongside elite talent as sort of a turbo-charged version of Mario Chalmers in the Heatles days. So while many Knicks fans may feel a personal investment in the development of the second-year guard, the stakes are a little different than for Knox, who was drafted with the hope that he could become a star and potential number two or three option on a playoff team very far down the line.

As for Mitchell Robinson, I’ll say something I NEVER expected to write coming into this season: he is further along than Knox. It’s not that Robinson is some finished product, but his growth will be tied to discipline—cutting down on fouls, not jumping himself out of position going for blocks—and refining the skills he already has. The role he currently plays isn’t far off from the role he’ll play at his peak; it’s just more contained at the moment. Because of that, his development plan should be relatively straightforward.

For Knox, that isn’t the case. While he’s already got a baseline of the skill that will get him paid in this league (look at Devin Booker, Zach LaVine, and Andrew Wiggins for how much money being a young volume scorer can get you), it’s the less glamorous areas of the game—rebounding, passing, defending—that will determine Knox’s career path, and right now, those areas are severely lacking.

Knox has recorded two double-digit rebounding efforts in the last four games, which is an encouraging sign, but for much of the season, it has been a real weakness for him. Now, I firmly believe that once Kev adds some muscle, his best position will be at power forward, but even for a small forward, a rebounding percentage of 8.1 isn’t going to cut it.

If we take a look at rookies who have matched (or been worse than) his rebounding percentage (8.1), assist percentage (5.4) and steal percentage (0.9), we get a list of 39 names that…well, isn’t super encouraging (full list here).

Now, this list is hardly a death sentence. After all, there are plenty of factors that contribute, most notably that many of the players on this list were in much more limited roles than Knox. If we add the qualifier of a usage rate that matches Knox’s (22 percent), the list shrinks dramatically. That said, it still doesn’t inspire a ton of confidence.

Now, we all know, in this age of Twitter and alternative facts that stats, especially advanced stats can be used to prove any number of points. We can’t let statistics by themselves dictate how we analyze players, though they are a helpful tool in that analysis. But what this examination helps us point out is just how many areas Knox has to improve on if he wants to become the next homegrown star for the Knicks.

And here’s where we get back to the question of development. It’s easy for terrible teams to just give their young players the rock and say, “Go score, and don’t worry about the rest.” Again, Wiggins, Booker, and LaVine come to mind. Fizdale was hired in large part because of his reputation as a player development guy, and we’ve seen in-season improvement from guys like Allonzo Trier, Mitch, and even Emmanuel Mudiay and Noah Vonleh, though there has also been some regression for both of the older (relatively speaking) guys. But if Knox is going to be an elite player in the NBA, scoring won’t be enough. How quickly he learns to defend, to hit the open man—which, to be fair, he’s gotten a little better at in recent weeks—and to bust his ass for rebounds will go a long way in determining Knox’s value moving forward.

Knox’s latest clunker comes to mind, too; in Tuesday’s home win against the Magic, he put up a horrendous eight points on 16 shots, plus five rebounds and two assists.

This remains true whether or not the Knicks sign marquee free agents this summer, although, as we’ve seen with the Lakers this year, doing so will push the timeline forward considerably and lessen the willingness to overlook warts by fans, media, and teammates/coaches alike.

Either way, how much and how quickly Knox develops will be crucial in the success of the team, and the coaching staff, in the coming years.

Note: This post was updated after initial publishing to illustrate Kevin Knox’s advanced stats and comparable players to the Knicks rookie. Find the full list of “39 names” in the hyperlinked text above the illustration.