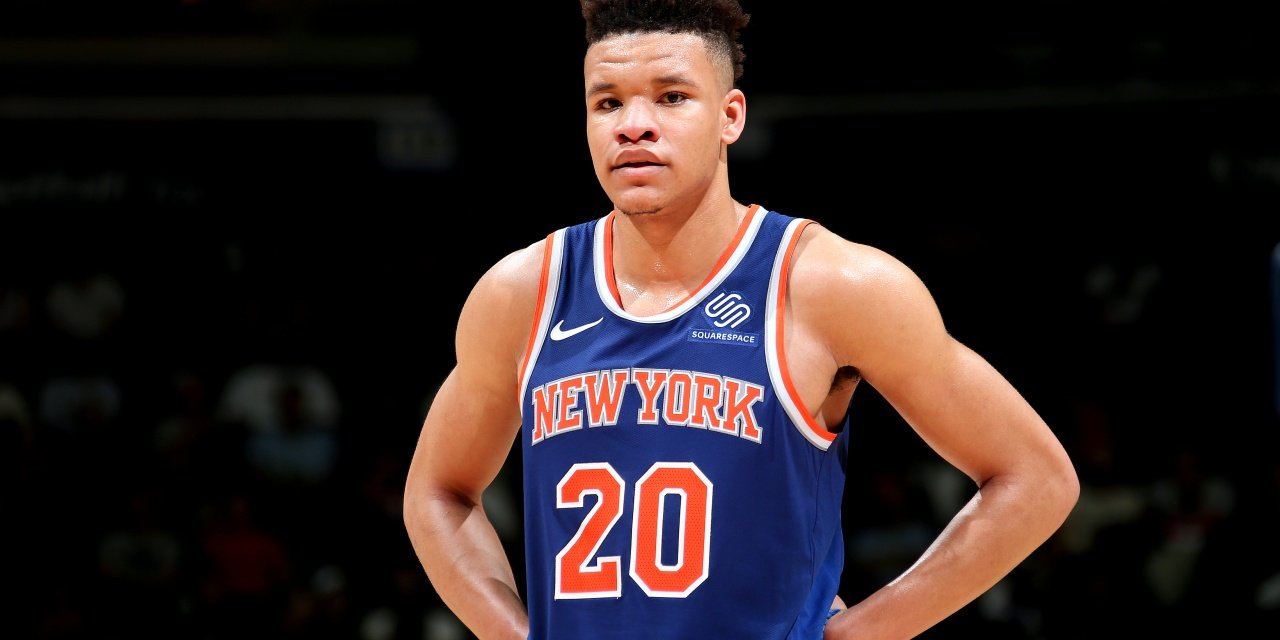 Kevin Knox had a rare start and a rare finish on Friday night. The guard was largely quiet in the first quarter, tallying one field goal attempt. He ended the half shooting 2-5 from the field, with seven points to his name.

In days past, this would mark the end of productivity for Knox: he’d disappear for the rest of the game, going unnoticed. However, this wasn’t the case against the Indiana Pacers. Knox went scoreless in the third quarter but scored another efficient seven points, lighting up the opposition in garbage time.

14 points aren’t much to brag about, but what’s important is how he scored them. Knox is neither a legitimate ball handler nor a shot creator. Thus, he’s most successful when his teammates feed him the ball at opportune moments.

Kevin Knox wasn’t lauded as an exceptional three point shooter coming out of Kentucky, but the work he’s put in shows. In his sole season at the University of Kentucky, he shot 34.1 percent from three. So far, he’s shooting 35.3 percent from three in his rookie season. Considering the stark distance between the NCAA three-point line and the NBA three-point line, and his consistent amount of attempts thus far, this is actually a marked improvement.

Getting the ball on the perimeter with only a fraction of a second between himself and his man is all Knox needs to get a shot up. As a whole, Kevin is shooting 35.8 percent on catch-and-shoot three-pointers this season. At 6’9” with an even longer wingspan, the Knicks rookie has the ability to simply shoot over defenders. If he can capitalize on these shots, defenses will begin to contest more closely, and fall for a pump fake or leave themselves vulnerable to a drive.

It’s obviously not a perfect play, as the spacing is off, but using a ball fake to put the main defender in the air and then using his agility to get to the hoop could lead to some advantageous playmaking in the future from Knox. For now, a tough bucket and a foul will do.

The Less he Dribbles, the Better

Although he’s struggled to create his own shot since entering the league in October, Knox isn’t completely inept. The rookie forward needs playmakers on the court to facilitate the drive if he can’t take his defender off the dribble. He’s lengthy and athletic, so one step gives him the leverage he needs to get to his spot.

When he gets into the paint, defenses may collapse around him, but with a head of steam and one dribble Knox rises above the primary defender and extends his arm even further. A simple pass that allows him to take advantage of angles can lead to plenty of scoring opportunities for Knox, and the less work he needs to do to get there, the better.

Knox shoots 41.7 percent when he takes one dribble before a shot attempt. It’s a fairly mediocre number, but it’s the highest field goal percentage among his dribble attempts before taking a shot. In short, pounding the ball into the ground doesn’t do much but ensure that his field goal percentage drops.

Sharing the court with Emmanuel Mudiay, a slasher and the best passer on the team, along with Tim Hardaway Jr. who can be an effective playmaker when his shots are hitting, should help facilitate his growth through sharing the ball a little more. Knox played more at the power forward spot on Friday than anyone should be comfortable with, but in such cases, it would behoove the Knicks to utilize his quickness for plays where his matchup can’t keep up.

Knox has progressed well since his rocky start at the beginning of the year, and found a semblance of an offensive skill set. Fizdale’s pace-heavy offense is a good start, but if the Knicks want to get his game to the next level they’ll need to have him moving without the ball until he’s ready to attack.

It’s mid-January and the Knicks are nearing mathematical elimination from the playoffs. With his starters set, Fizdale should continue to experiment and develop Knox’s offensive weapons.