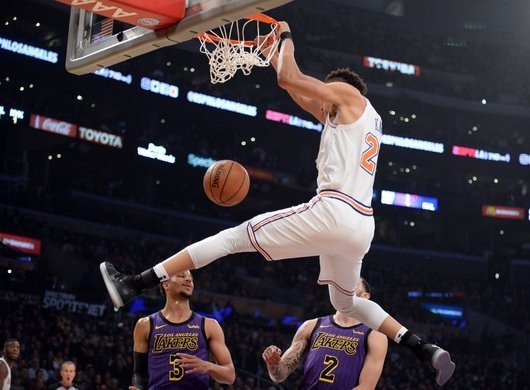 December’s Eastern Conference Rookie of the Month was notably absent from the NBA’s rookie-sophomore game, but Kevin Knox will play due to the Lakers’ Lonzo Ball sidelined with injury.

Knox was curiously missing from the initial roster. The Knicks’ rookie out of the University of Kentucky won the Eastern Conference’s Rookie of the Month in December. Knox, before Wednesday, was the first Rookie of the Month winner to miss the Rising Stars Challenge injury notwithstanding since Sacramento’s Ben McLemore in 2014.

Knox was the ninth overall selection in the 2018 NBA Draft, picked by New York in the first round. The Knicks also selected Mitchell Robinson—who put up a 13-point double-double last night against Detroit—in the second round of the draft and signed former University of Arizona guard Allonzo Trier as an undrafted free agent. Arguably any one of the three could build a case to play in the rookie-sophomore game.

Knox will replace the Los Angeles Lakers’ sophomore point guard—and former second-overall pick—Lonzo Ball, who sprained his ankle in January and continues to be sidelined.

The rookie-sophomore game in recent years has been reconstructed to pit Team World vs. Team USA—first- and second-year players the league views as “rising stars” against each other during the All-Star celebration festivities.