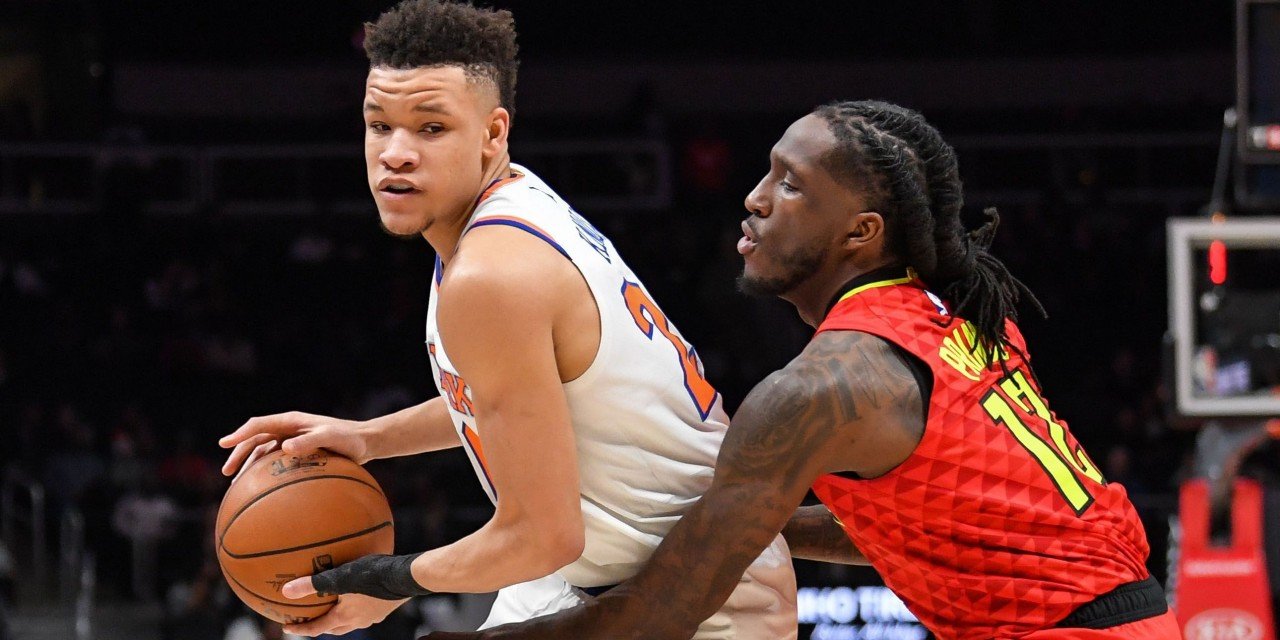 In the first half, Knox was used in a reserve role, putting up a mostly quiet seven points on 3-of-5 shooting. On his first touch of the game, Kev took the ball to the rack aggressively, bullying crosstown rival Rodions Kurucs of the Brooklyn Nets and finishing a two-handed slam, showing that Knox could have dropped 40 points in his sleep if he wanted.

After another slam, Knox swished a three-pointer in transition, demonstrating his adept, albeit inconsistent shooting stroke.

The 19-year-old also airballed another attempt from downtown and missed a layup before subbing out for the remainder of the half.

After starting his current (soon-to-be former) teammate Jayson Tatum in the first half, Team USA coach Kyrie Irving elected to start his future teammate, Knox, to begin the third quarter. Continuing to play as reserved as Frank Ntilikina in last year’s contest, Knox didn’t make much of a demonstrated impact in tonight’s game, other than a few highlight plays.

Following a tip-in finish off a lob early in the half, Knox flushed another slam off a beautiful behind-the-back feed from Trae Young, capping off a momentum-shifting run by Team USA in the fourth quarter. Knox went to the bench following this timeout and watched his team close out its victory.

Our rookie has 11 in the game pic.twitter.com/V0aZCUShnV

With plenty of young talent in the Knicks’ division this season, Knox had the opportunity to square off with several of his foes tonight. Let’s go one-by-one to see how he fared against each of his adversaries.

Ben Simmons: While Knox attempted three shots from deep, he sunk one three-pointer tonight. Simmons, being the coward he is, did not shoot once from beyond the arc. He also missed a couple of dunks.

Jayson Tatum: Not only is Tatum no longer 19 years old, he also was benched by his own teammate—a future Knick, to be fair—in favor of Knox to start the second half. Yikes.

Rodions Kurucs: Kurucs allowed Knox to blow by him with ease for a slam. He also lost the ball going up for a layup tonight. No contest.

Jarrett Allen: Allen made some nice contests at the rim tonight, but the fans want to see offense in exhibition games like these. Nice try, try hard.

OG Anunoby: Anunoby had some great minutes off the bench for Team World, but he was badly outscored by Knox in being a Knick in tonight’s game, losing 1-0. Case closed.

As the sole representation of the Knicks tonight, Knox kept it cool and knew what tonight’s game was about. While it was fun to root for our teenage son tonight, it would be awesome to see Knox flanked by the likes of Zion Williamson, Mitchell Robinson, and Allonzo Trier in next year’s Rising Stars Challenge. Here’s to hoping.