Kevin Knox, Tom Thibodeau and the Next Steps Forward 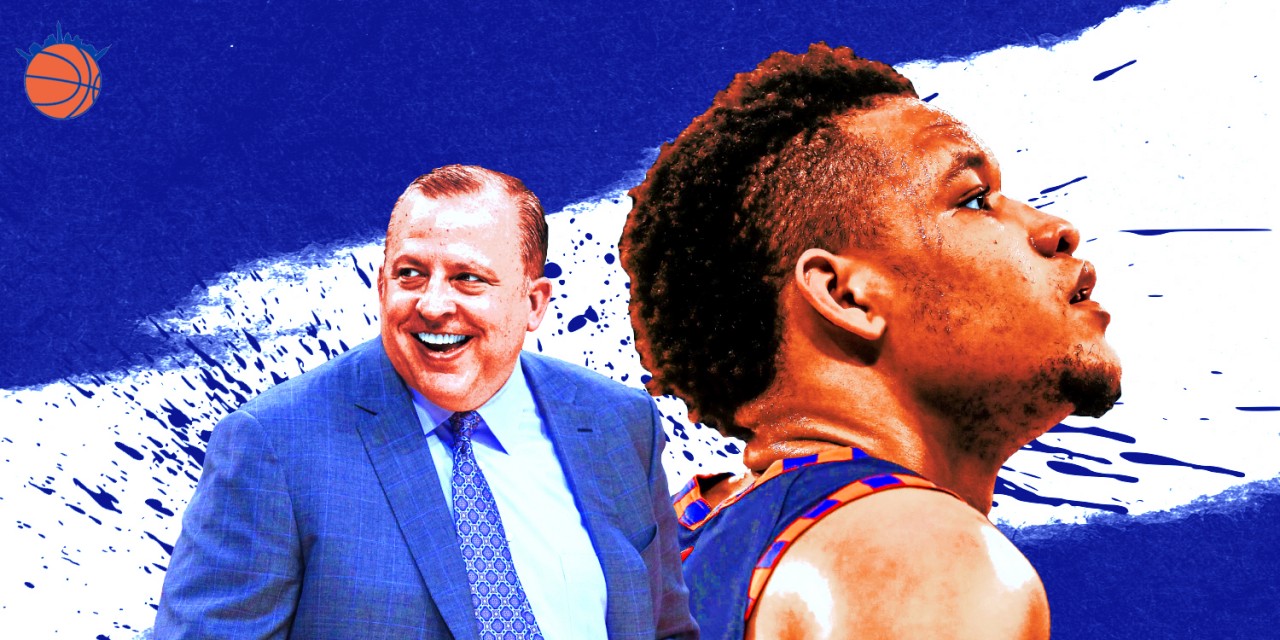 Kevin Knox had an abjectly terrible sophomore season with the Knicks. With Tom Thibodeau hired, he’s going to have to do a lot more to stay on board.

When Tom Thibodeau was officially hired as the head coach of the New York Knicks, the mind began to race about the next iteration of the team. Thibodeau’s status as a defensive-minded coach offers New York an identity and, with cap space, some holes could be filled to turn the corner and take the Knicks from a cellar-dweller to a team looking to contend for the backend of the Eastern Conference playoff picture.

But if the Knicks are going to take that step forward, it’ll involve cleaning up one of the worst rosters in the league. If New York added a point guard—LaMelo Ball, Fred VanVleet, or even Chris Paul—that could spell the end of Dennis Smith Jr’.s tenure with the team. Allonzo Trier was already released and Damyean Dotson could be right behind him out the door.

Another player who could make that departure list is the Knicks’ former ninth-overall pick, Kevin Knox.

Two seasons ago, the Knicks viewed Knox as a “high upside” player, selecting him over the likes of Mikal Bridges, Shai Gilgeous-Alexander, and Michael Porter Jr. Two seasons later and Knox has not only struggled to get his footing as a professional, but his numbers all also declined from his rookie campaign to his sophomore campaign, highlighted by his minutes per game dropping from 28.8 to 17.9.

Is Kevin Knox salvageable under Tom Thibodeau, and will he get the chance to prove his worth heading into year three of his career?

The second question is more important than the first. At first blush, Knox doesn’t seem like a Thibodeau player. Frank Ntilikina and Mitchell Robinson are easy to sell to Thibodeau, thanks to their calling cards being defensive upside. R.J. Barrett is a decent defender and could be sold as Thibs project, hoping that one day Barrett could blossom the same way Jimmy Butler did under his tutelage.

Kevin Knox falls short of that. For his shortcomings as an offensive player, his defensive attributes continue to lag behind. The defensive metrics don’t do him any favors (-1.1 DBPM, -4.2 BPM, -3.41 DRPM), but from strictly an eye test, Knox lags on defense, mostly because of his lack of basketball I.Q. on that end. At 6-foot-9, Knox should be able to adjust and shuffle between both forwards defensively.

At Kentucky, Knox at least flashed some flexibility defensively. Now, he’s very overwhelmed on that end.

What is the one skill that Knox can hang his head on to remain in Thibs’ rotation? Even his shooting (32.7% on 3.1 attempts last season) is below average. Look for New York to upgrade their shooting this offseason, and if they do, where does that leave Knox? Thibodeau mentioned sending players to the G League, which is beneficial in the long run, but what is the benefit of sending Knox to the G League now, one year before his restricted free agency period?

Which leads me to the first question—is Kevin Knox salvageable under Tom Thibodeau? While Knox has submitted two of the worst seasons in recent memory, it’s tough to gauge what kind of player he is. After splitting playing time between both forward spots as a rookie (55% at small forward, 44% at power forward, via Basketball-Reference), Knox played 77% of minutes last season at small forward, where his defense gets exposed. Knox also doesn’t appear to be a playmaker either, registering 143 assists to 159 turnovers in his first two seasons.

But there have been moments where Knox looks like someone who can be an adept shooter. Over his first two seasons, Knox attempted 563 threes and made 33.7% of them. He works best in short bursts, whether it be direct attacks to the basket or as a cutter. Despite that, Knox shot 56.4% at the rim last season. Today, Knox feels like a standstill shooter who, if he develops consistency, could have value as an end of the rotation shooter. However, that value becomes limited to the lack of other tools in his toolbox. He won’t ever be an elite defender, nor will amaze anyone with his passing.

For New York, is a standstill shooter worth developing at this time? Based on where the team is, yes—especially when you consider the Knicks need a floor-spacing forward to play alongside Mitchell Robinson. That tandem, in theory, makes sense because Robinson is talented enough to cover for Knox defensively, while Knox provides some stretch to the offense, allowing the lane to be a bit more open. However, the addition of Leon Rose in the front office and Tom Thibodeau to the bench means the Knicks are working at an accelerated pace.

The most frustrating part of all of this is Kevin Knox is the type of player that needs better players around him. Knox’s defiances aside, he’s never played with a proper point guard and his first season did him no favors, as he was thrust onto the floor with no proper plan. If the Knicks were to add proper free agents around him (you know, like Fred VanVleet), the Knicks could properly manage Knox’s minutes around players who can cover his deficiencies.

Going into the 2020–21 season (in a bubble?), there is some hope for New York’s younger players. R.J. Barrett will get a second season to improve this offseason, while guys like Ntilikina and Robinson could be two very important players to the team’s defensive plans. With Thibodeau at the wheel, it seems like the Knicks will finally have some direction with their younger talents.

But as Ntilikina, Robinson, and Barrett seem to be winners in Thibodeau’s arrival, Knox and his future as a Knick still seems up in the air. The now 21-year-old forward is coming off of two poor seasons, and as New York looks to move closer to decency, his potential rotation spot could be in question. As a young player, the hope is he can continue to develop—but are the minutes there?

Only time will tell. Before we move to the draft and free agency, Kevin Knox is one of the few players on the roster who could be on the outside looking in on a potential Tom Thibodeau rotation.