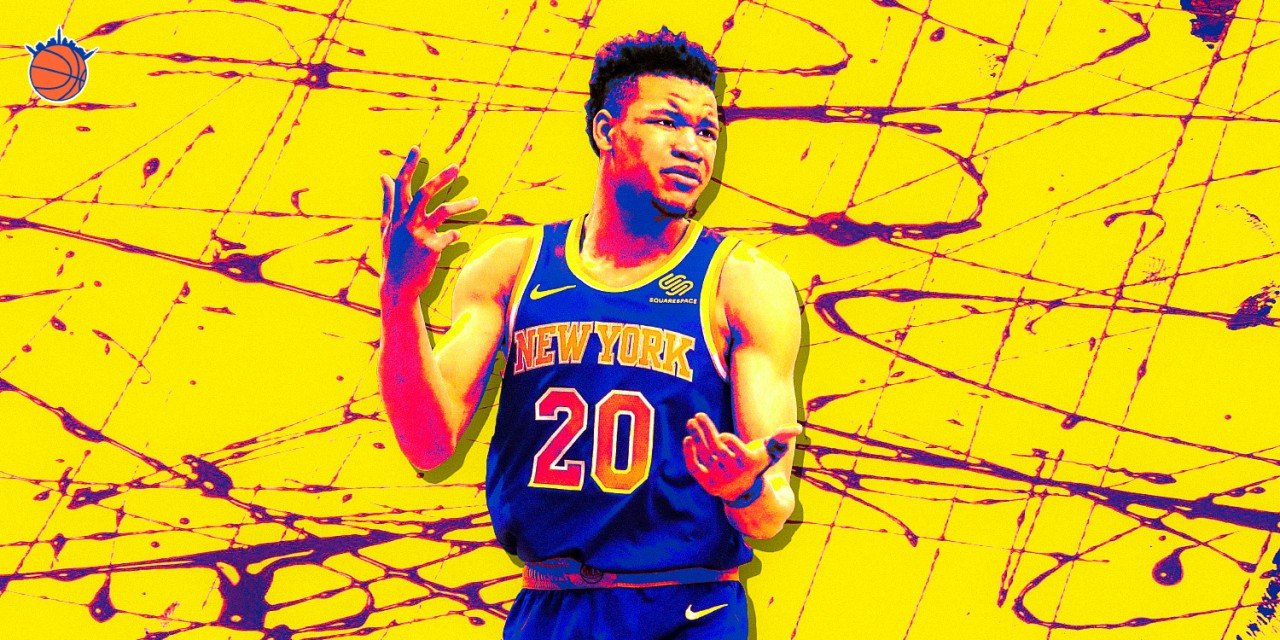 Kevin Knox faces a looming position battle, as the 19-year-old must demonstrate development amid a chaotic forward rotation.

After New York’s massive spending spree, the Knicks are looking to improve their standing among the league’s best. It isn’t Kevin Durant and Kyrie Irving, but New York’s front office has amassed one of the largest free-agent classes in an attempt to improve their 2019–20 win total and their stature for 2020 free agency.

It also brings its own collection of questions—the largest being how the Knicks and head coach David Fizdale will manage the youth-veteran dynamic. Bringing in seven free agents and two rookies, New York has group of older players who will look to play, due to their salary, and several younger players looking to make their impact in the league.

One player whose future is largely in question is second-year forward Kevin Knox.

Selected ninth overall last summer, Knox was seen as a long-term play for the franchise. Fizdale said midseason that Knox’s rookie campaign would help him down the line. It was a frustrating first season for Knox, who finished with 12.8 points, 4.5 rebounds, 1.1 assists, and a 47 True Shooting Percentage in 57 starts.

Then, the Knicks added a cluster of power forwards.

It’s not exactly fair, considering Knox can play both forward positions. However, the majority of New York’s summer spending was allocated to both small and power forwards. Both Julius Randle and Bobby Portis will spend a ton of time at power forward, while Reggie Bullock and Marcus Morris will each spend time at small forward. It creates an uphill climb for Knox to secure playing time.

As the Knicks embark on a journey toward the playoffs, Knox will be fighting for playing time, and could find himself on the outside of rotation looking in.

Among the top 10 players selected in last year’s draft, Knox had the worst season. Along with shooting below 50% from the field on all shot attempts last season, Knox had a Player Impact Plus/Minus (PIPM) of -5.0, Box Plus/Minus (BPM) of -6.0, and a Value over Replacement Player (VORP) of -2.2.

It signaled a bleak outlook for his future, as FiveThirtyEight rated Knox as one of the worst players in the league moving forward. Not great.

Despite a disastrous season for Knox, there was a positive: Knox’s shot chart looked like that of a “Moreyball” player. As a rookie, 39.8% of Knox’s shots came from beyond the arc, per Basketball-Reference. While he didn’t take a ton of shots at the rim—22.1%—Knox knows his value as potential long-range shooter.

Other than spot-up shooting, though, many aspects of Knox’s game need work.

An earthquake, Mitchell Robinson dunking everything in sight, and third overall pick R.J. Barrett playing an intriguing point-forward role. Those are some of the things that overshadowed Kevin Knox looking good at Summer League.

It was a small, five-game sample, but Knox finished with averages of 16.8 points, 5.6 rebounds, and 2.0 assists. He didn’t shoot the ball well, finishing 40% overall, but he also finished with a PIPM of +0.63 in 116 minutes. His best game came against the Los Angeles Lakers, in which he finished with 25 points, seven rebounds, and three assists.

In what could be his forthcoming season sneak peek, Knox showed a glimpse of what his ideal role will be—moving off the ball and navigating through screens to space the floor. Knox also showed improved passing ability, making some good passes to both Robinson and Barrett throughout the game.

It’s tough to find playing time for Knox at the moment without shoving him into the rotation. Even the shooting dynamic he offers doesn’t best recent additions Bullock and Wayne Ellington. If the Knicks want shooting from a big man, they’ll lean on Portis—39.3% shooting from three-point range last season—to provide spacing.

Once he does get on the floor, the University of Kentucky product will have to improve his outside shooting and footwork, the latter of which would allow Knox to thrive with balance and more of an effective shooting off screens.

Knox already takes a ton of threes, but he’ll have to take a step forward to become a more efficient shooter.

His swing skill appears to be just about everything else. His effort waxes and wanes throughout the game, making it tough for him to be a true factor elsewhere. Knox was one of the worst defenders in the league last season, though he offered switchability at times. Knox’s passing improved at Summer League, which could be interesting as a pick-and-roll ball handler in spurts.

It remains to be seen whether competition pushes Knox to be a better player. So far, he’s said the right things about pushing for a rotation spot this preseason, expressing excitement and a readiness to battle among among the offseason additions. More consistent play should help him as he vies for a rotation spot.

As far as fit goes, Knox will need to be surrounded by solid defenders. Robinson will certainly clean up any defensive miscues. The perimeter, however, will be another concern. He’ll need a strong ball handler to create space for him; Dennis Smith Jr. can do it, Barrett also showed flashes of doing it in the summer.

Two players that could be interesting are Taj Gibson and Damyean Dotson. Both players could help cover some of Knox’s defensive issues, while also taking a secondary role on offense. Gibson’s veteran leadership can’t hurt either.

Just a season ago, Kevin Knox was touted as a long-term piece who could help the Knicks move into the right direction. 13 months later, the Knicks brought in four players who could theoretically play over him.

Even though Knox’s outlook appears cloudy at the moment, being surrounded by better players may work to his benefit, allowing him to work in a more direct role. Shooting, working off screeners, and playing a bit as a PnR instigator worked for Knox last season and should definitely be key areas of focus this season.

»READ: 2018 draft re-do: what do the Knicks look like if they never drafted Kevin Knox?