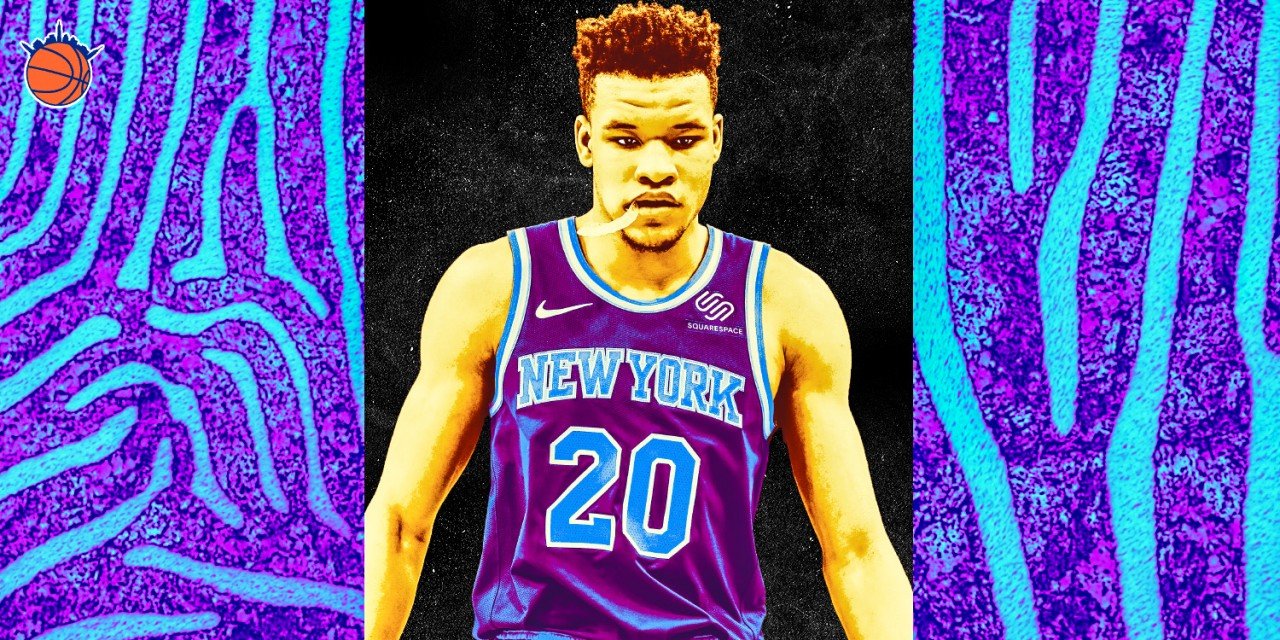 Kevin Knox has emerged as the clear “roller coaster” candidate of the New York Knicks’ rookie class. With his first season in the books, what’s next for the 19-year-old?

With Wednesday’s final beatdown by a mediocre team, the last Knicks game is in the books, which means another season has mercifully come to a close, and none too soon.

The year started off with what appeared to be a simple, paint-by-numbers plan: try to develop the many young guys and former lotto picks desperate to shed the “bust” label while treading water until such time as Kristaps Porzingis was ready to reappear like Gandalf cresting the hill on his white horse, here to save the day when the hour is darkest.

But as the many new Garden players soon learned, no plan set in motion by Knicks management is ever too simple to not get royally forked up. Most people reading this already know how this story ends: an acrimonious trade, cagey Instagram hints, and a whole lot of uncertainty and instability in the foundation Scott Perry and Steve Mills had been attempting to lay.

One of the people most affected by the mid-season, franchise-altering pivot was former ninth-overall pick Kevin Knox.

Knox had already gone most of the way around his own emotional roller coaster by the time the KP trade happened. From the boos heard on draft night—for no apparent reason other than to adhere to the worst new tradition the franchise has to offer—to the Summer League showout that earned him a First Team All-Summer League selection and some, shall we say, slight overreactions, to the lackluster preseason and ankle injury that led to an early demotion, to a monster December showing that earned him Rookie of the Month honors, to a January that saw the bottom fall out as his shooting cratered and he looked more lost on the floor than he had since he left Lexington.

But that tumult was nothing compared to what was coming.

The Porzingis trade didn’t just change the Knicks’ future plans, it also changed the way Knox, along with the other young players, had to be evaluated. Before the trade, Knox’s utter cluelessness on defense wasn’t great, but it also wasn’t quite as concerning. After all, he was only 19 (have you heard?) and would soon be playing alongside one of the top rim protectors in the league (two if you count Mitchell Robinson). His inconsistent shot and wild forays to the rim would be phased out once the franchise savior came back and Knox was relegated back to the second/third scoring option he was meant to be.

But now there was no safety net. Suddenly, the Knicks were in real danger of having three top-10 picks in four years and coming away with zero potential stars (or even above-average NBA starters). The spotlight turned up, and when Knox’s play in February didn’t, so did the criticism.

Did you know Kevin Knox was dead last in the league in RPM this season? Because NBA Twitter sure does! Did you know he doesn’t play defense or pass? Did you know his forehead is shaped like there’s a pair of lips growing in either direction from his nose? Okay that concern existed before the Porzingis trade, but still.

For a while there, the only thing shielding him from even harsher evaluation was the emergence of Mitchell Robinson as the clear-cut best player on this young team and legitimate building block to be excited about.

And yet, through it all, Knox has maintained an impressive level of composure and professionalism. He said the right things, appeared to be aware of the holes in his game, and more importantly, willing and even eager to address them. Credit here has to go to Fizdale and the coaching staff, who have gone out of their way to empower and support Knox.

While some fans (myself included) have expressed frustration at how long a leash Knox got compared to other young guys like perpetual-deer-in-the-headlights Frank Ntilikina, that trust has clearly paid off in keeping Knox upbeat and self-confident.

And it’s paid off in how Knox has performed to close this mostly wasted season.

Before the team decided to collectively throw up one last stinker against Detroit (Knox was 3-of-12, 0-for-6 from three with nine points, seven rebounds, one assist, and three turnovers), the 19-year-old had put together a quietly impressive 15-game stretch that went largely unnoticed because, let’s face it, the Knicks were borderline unwatchable at the time preceding the explosion of Point God Mario Hezonja.

In those 15 games, Knox scored 15.7 points with 4.7 rebounds and 1.6 assists while shooting 41.5% on 5.5 three point attempts per game. His overall shooting was still inefficient (42% from the field), but still substantially higher than his season average of 37%. Those numbers are close, though not quite as impressive, to his highly lauded performance in the month of December (17 points, six rebounds and 1.5 assists, 38.4% from three), and even with the dud in his season finale, his six-game stretch in April saw improvements in rebounding (seven per game) and distribution (two assists per game).

With Knox, that’s the name of the game when analyzing his rookie season: improvement. Everyone knows the flaws in his skill set, and even his strengths could barely be described as such. As a scorer he was both inefficient and inconsistent, and the athleticism that was so exciting about his performance in Summer League was exposed as something of a mirage when he started going up against actual NBA defenses.

But if you squint, you can see the signs of a young player starting to understand the spots where he needs to refine his play.

For example, in Knox’s first 16 games as a Knick, he averaged fewer than one potential assist a game—a truly horrific number. Then December came around and as he grew more comfortable on the court, he learned how to pick his spots a bit better. His potential assists per game jumped from 0.8 in November to 2.4 (which, granted, is still pretty terrible) in December and never dipped below 2.3 again, culminating in April, where he was responsible for 3.8 potential assists. That number isn’t exactly awe-inspiring (for context, over an entire season, that would put him on par with Klay Thompson, Joakim Noah, and Kelly Olynyk, and just a hair over Iso Zo), but again, what we’re looking for here is proof of improvement.

After all, some of these issues are going to go away naturally. There’s little doubt in my mind that Knox’s body will fill out over the next few years—I mean, have you seen those shoulders? That should, in theory, go a long way towards helping him finish on the inside, keep his shot consistent throughout a game, let alone an 82-game season, and play a more competent level of defense.

The real question is, how capable is he of adding a new skill set to the repertoire? Being able to create for others would raise his ceiling in a pretty substantial way, and it would open up more room for him as a scorer. But most importantly, it would show the ability to read the game at an advanced level and a capacity for more growth in the future.

The uncertainty surrounding both Knox himself and the team as a whole is far from over. If the Knicks somehow defy their past history and land two top free agents, the microscope’s focus will once again intensify on Knox, much as it did for the young Lakers this season.

Suddenly being lost on defense for a couple possessions each game could have huge consequences, and could cause him to lose the trust of his veteran, elite teammates. Turning the ball over on the break because you missed a basic read could cause coaches and fans to lose patience in ways it didn’t this season.

Likewise, if the Knicks are unable to swing a top-tier free agent and decide to run back another rebuilding (/tanking) season, and especially if they come away from the draft without Zion Williamson, the pressure to show franchise cornerstone potential could very easily ratchet up to near-unreachable levels. Barring a massive leap in multiple areas, it could quickly become a bleak and inescapably negative season.

In other words, the honeymoon is over. From here on out, the leash will be shorter, the excuses less forthcoming, the willingness to treat simply decent as something spectacular, for the most part, scattered to the wind like so many broken Knicks dreams before them.

To Knox’s credit, he seems to fully grasp the situation. He and Fizdale have both been vocal about improving his body in order to become more physical as a defender and as a finisher at the rim, which are arguably his two weakest areas currently.

Here’s Knox on his summer plans, per Marc Berman:

“Just focus on getting stronger in the weight room to be able take some more contact, play a little bit better defense in the post,’’ Knox said. “That’s definitely one emphasis, just getting stronger, working on my defense. I have the tools and the size to be a good defender. I’ve just got to be able to put it all together.”

David Fizdale echoed the sentiment in the same article, continuing:

Defense isn’t his only focus area, though. Between his meeting with LeBron James in March and All-Star Weekend breakfast with Scott Perry, it seems that Knox has been given some hard truths about the importance of being a willing distributor and figuring out how to not just score, but score efficiently.

It’s hard to know how much willingness to change will translate to ability to change. The best thing you can say about Knox going into the offseason is he seems to be listening. To be internalizing the information given to him and, at least vocally, agreeing to put his time in there. As a player he seems malleable and coachable and from all accounts, a dedicated grinder once the game ends.

And for a guy who still asks his dad advice on how to grow facial hair, that’s really all you can ask.

»READ: Contract-year Knicks: Who deserves to be re-signed?