Were Kevin Knox and the Young Knicks Snubbed at the NBA’s Rising Stars Challenge? 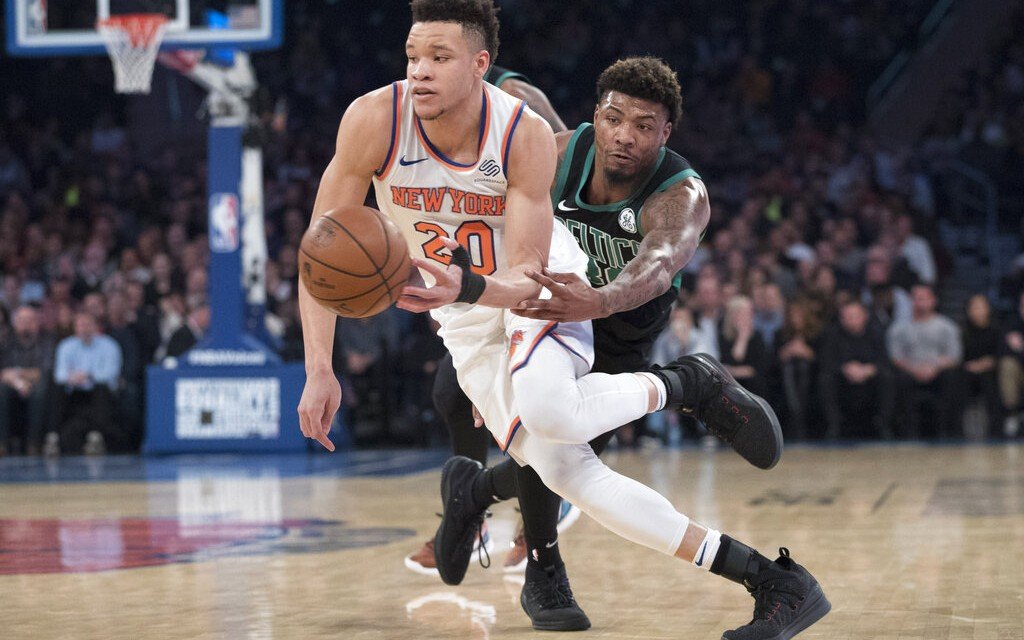 The Knicks roster is more than 50 percent rookies and sophomore. Why didn’t any of them make the Rising Stars challenge, most prominently Kevin Knox?

Over the past few years, the New York Knicks have always had a representative at All-Star Weekend, one way or another.

The Knicks wouldn’t have a single representative for All-Star Weekend, if it wasn’t for the blockbuster trade that sent Kristaps Porzingis to the Dallas Mavericks and Dennis Smith Jr., a Dunk Contest participant, to New York.

It’s been quite a shock that rookie Kevin Knox did not earn a spot in the Rising Stars Challenge. As an Eastern Conference Rookie of the Month, Knox surely was a shoo-in, right?

The politics of the Rising Stars Challenge has shifted over the course of the last decade. What was once a showcase for rookies and sophomores to be pitted against each other pivoted into a Shaquille O’Neal–Charles Barkley feud with the two Hall of Famers serving as GMs for the rosters.

The NBA legend head-to-head angle was axed in 2015 in favor of the Team USA vs. Team World format. Growing clout in the international sports world, basketball is well on its way to becoming a global game. International players returning home are willing ambassadors. Culminating in the unveiled Jr. NBA World Championships, the NBA is looking for that soccer money. Team USA vs. Team World complicates things within the paradigm of the Rising Stars Challenge by limiting the number of spots available for Kevin Knox, a Florida native. Still, he’s good enough to get in, right?

Despite his Rookie of the Month selection, Knox has had a mostly down year. Not living up to Summer League hype is one thing, but consistent underperformance has been the story of the first half of his rookie campaign. The ankle injury that sidelined him from October 22nd to November 4th didn’t help his chances. Durability isn’t a conventional statistic, but missing seven games after a slow start while the rest of his cohort was playing basketball could have affected his chances. In his subsequent first full month as an NBA player, November, Kevin Knox averaged 7.1 points and 2.9 rebounds on 31.6 percent shooting in 17.8 minutes per game.

Admittedly, he showed improvement in December, the month for which he received his Rookie of the Month accolade. His refreshing 17.1 points on 38.4 percent shooting from three and 6.0 rebounds per game for the month of December came right on time for him to earn honors. Those numbers which saw him acclimating to the NBA repaired his confidence, even though the Knicks piled up losses.

January was somewhere in between for Knox as his numbers regressed to 13.0 points and 4.1 rebounds on 36.6 percent shooting from the field. His hot first quarters appeared to be featured as he scored 10 points or more in the opening period six times (per NBA Stats).

He’s looked fairly solid for the past two months. How could Knox not be selected?

The number of spots are diminished greatly, as he’s limited to only playing for Team USA. On the year, he’s averaging 12.5 points and 4.2 rebounds on 37.4 percent shooting. The Team USA roster boasts five forwards. Jayson Tatum, Kyle Kuzma, Jaren Jackson Jr., John Collins, and Marvin Bagley have all averaged more points and rebounds than Knox, while also boasting higher field-goal percentages. Kuzma, Collins, and Tatum are second-year players with more NBA experience under their belt. As a rookie in a roller coaster of a season, his chances have always been shoddy. Arguing that Knox deserves a spot ahead of any of them is a tough case to make.

As much as it pains me to say it, Knox has rightfully been left out. Yet, the Knicks have indeed suffered a Rising Stars snub this year.

Allonzo Trier, the Knicks’ undrafted rookie, has exploded this season and made quite a name for himself on the club. On the year, he’s averaging 10.5 points, 3.0 rebounds, 2.0 assists, and a 37.3 percent three-point field goal percentage. He is also averaging 3.3 free throw attempts, shooting 84 percent from the line, and catching a fucking body approximately 1.1 times per game.

It might have been tough for Allonzo Trier to make it on Team USA ahead of Trae Young, Donovan Mitchell, Lonzo Ball, and De’Aaron Fox, but his Korean heritage makes him eligible to play as a member of Team World.

So what, or whom, was exactly keeping him from making the Mountain Dew Ice Rising Stars Team World roster? Because we need answers.

Everyone on the rosters surely shows promise, but when it comes to a side-by-side comparison of Trier and a couple of the Team World guards his resume wins out. Luka Doncic and Ben Simmons are in a league of their own, but Josh Okogie and Shai Gilgeous-Alexander are clearly leaps and bounds away from two players slated to be All-Stars for the next decade. Gilgeous-Alexander is averaging 9.9 points, 2.9 rebounds and 2.6 assists on 46.3 percent shooting for the Los Angeles Clippers this season. It’s not bad, but Trier edges him out in points per game, rebounds, and three-point percentage. Between those two, it may be a matter of preference.

However, the NBA’s assistant coaches’ decision to select Okogie over Trier is heinous.

Okogie is averaging 7.3 points, 2.9 rebounds, and 1.2 assists on 35.6 percent shooting. Offensively, that would put him in the same boat as Kevin Knox. Trier surpasses Okogie in almost all statistical categories. Any argument citing Trier’s age, 23, is also invalid since Kuzma made the cut at 23 years old and Bogdan Bogdanovic is damn near 30. Okay, he’s only 26, but still.

From this day forward, all assistant coaches are haters, All-Star Weekend is a scam, and I may never drink that lighter fluid known as Mountain Dew ever again. Kevin Knox’s non-selection as a Rising Star player was, truthfully, a tough call, but Iso Zo deserves better.