Knicks Should Stay Away From Jabari Parker Reclamation Project 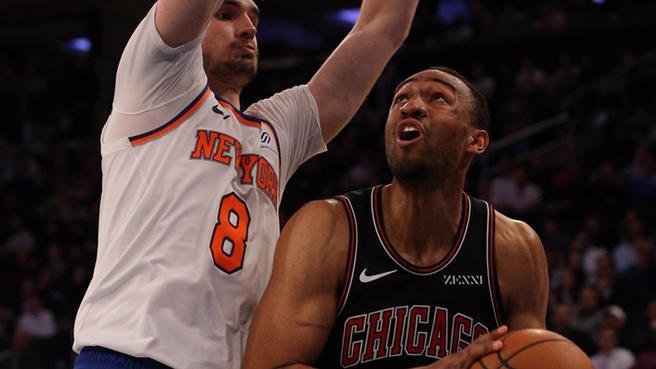 ESPN reported the Knicks could make a move a deal for Chicago’s Jabari Parker—but that would be a mistake for the New York rebuilding franchise.

Reports began to make rounds Thursday that the Knicks are among several teams with some interest in Chicago Bulls forward Jabari Parker. The Bulls removed Parker from their rotation last week, but left the door open for a potential turnaround with Bobby Portis out again. ESPN’s Ian Begley, first to report this news, mentioned no deal is imminent. Thanks, but no thanks.

For Scott Perry and the Knicks—who, to be crystal clear, have not been publicly in contact with the Bulls as of this writing—this is simple due diligence. Parker fits the “failed lottery pick” profile Perry has taken calculated risks on. This method has yielded early returns with the strong play of Emmanuel Mudiay and Noah Vonleh.

A move to New York could benefit Parker, too. Is there a greater stage to audition for a new contract than the media capital of the world? His return home to Chicago has been a disaster—hence his availability months after being signed. He was a gamble signing by the Bulls, but in Parker’s defense, the Bulls have one of toxic organizations in the league.

Escaping that toxicity could be just what Jabari needs to get back on track. Vonleh can attest that this method works, as he did the same thing (with the Bulls ironically) last season and is now enjoying a rebirth with the Knicks.

Under David Fizdale, Parker may be free to do some things his previous coaches may have not wanted him to do. In the case of Vonleh, Fizdale urged him to open up his offense and bring the ball up the court. With some newfound freedom, Jabari could have a rebirth of his own.

At the right price, taking a low-risk gamble on Parker (a former second-overall pick) is a logically sound decision. It’s worth noting, however, that unlike Mudiay, Vonleh, or Mario Hezonja, Parker is damaged goods. He has torn the ACL in his left knee twice in his first three seasons. Prior to his second tear in 2017,  he enjoyed a career season with the Bucks. Since then, Parker has not been the same player.

That is why the right price exists only if the Bulls are willing to take some unwanted contracts back. This would include names such as Tim Hardaway Jr., Courtney Lee, or even Enes Kanter. If Bulls GM John Paxson is willing to take Lee, or do a straight up swap for Kanter/Hezonja, then maybe you take a swing. Derrick Rose flashbacks aside, a move for Parker has limited appeal for the Knicks.

Fizdale’s locker room is vibing right now. Despite the poor record, you can feel the culture shifting. The players seem to genuinely care about each other. They play hard for each other until the final buzzer most nights. Rookies Kevin Knox, Allonzo Trier, and Mitchell Robinson have been able to learn on the job thanks to available minutes. Lottery reclamation projects Mudiay and Vonleh have enjoyed turnaround seasons. Adding Parker takes away some of those minutes and risks the chance of damaging that camaraderie.

One of the more important tasks this season is developing Kevin Knox. Knox is just starting to get his footing, thanks to a consistent role with consistent minutes. Parker would eat into those minutes, given that he and Knox play the same position, creating an unnecessary logjam.

Then there is Hezonja, who also plays the 3 and 4. As frustrating as he may be at times, at least you know he cares on the court. The team loves the little things he does on defense, and there’s no question he brings confidence to the locker room. It would not send the best message to the locker room if someone like that was dropped like a bad habit for a brand new reclamation project.

Thankfully, the Jabari to New York talk is just that—talk. The Knicks’ main focus in terms of the trade market is to move Lee. Any road that can accomplish this task is worth exploring, but that’s where the Jabari intrigue should begin and end.