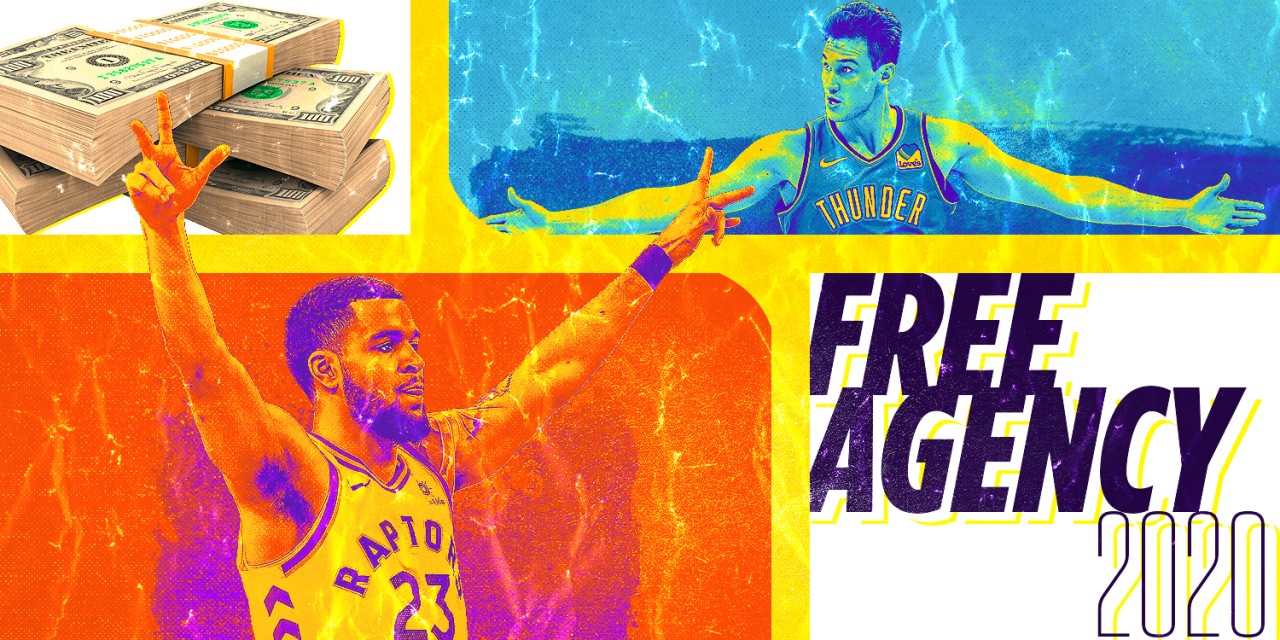 Despite the ongoing dispute between players and league, the 2020 NBA free agency is starting to take shape, and the Knicks have plenty of cap space.

When the Orlando bubble drew to a close on October 11th, many began to feel a void created by the absence of NBA activity. Fortunately, it seems as though that void will be filled shortly. The NBA is currently working with the following timeline, according to CBS Sports, the draft will take place on November 18th, with free agency starting sometime between November 20-22, followed by training camp beginning on December 1st and opening night happening on December 22nd.

This timeline is by no means confirmed, and until the start of free agency is officially announced, there will not be any NBA transaction noise related to players. Two weeks ago, Brian Windhorst of ESPN noted that “teams are currently not allowed to sign players to an extension, waive players under contract and, most importantly, conduct trades with another team (or teams). Expect the transaction window to get lifted once there is an agreement on the aforementioned CBA with the players.”

When the transaction window is lifted and free agency kicks off, the New York Knicks could be one of the most active teams in the league. The Knicks will be one of only four teams (with the Atlanta Hawks, Charlotte Hornets, and Detroit Pistons being the others) that will be able to spend outside of the $9.3 million mid-level exception to which all teams have access.

Skeptics will point out that the Knicks could just as easily leave this offseason with nothing to show for all the organization’s cap space and the star allure of Madison Square Garden, but because of the COVID-driven financial hole the rest of the league finds itself in, this offseason does not project like others. The Knicks have a variety of strategies to pursue this offseason in order to improve the franchise both presently and for the future.

This is essentially what the team did last summer. Although it might not have made many headlines, the Knicks are in a better position today than they were one year ago because of the moves made last summer. The process is as follows: sign players to short, team-friendly deals that can either be flipped to gain additional mediocre assets (think trading Marcus Morris Sr. at the deadline for an expiring contract, a late first-round pick, and a second-round swap) to further the team’s war chest of trade chips, or to keep the team’s cap sheet clean going forward. The 2021 free agency class blows the current one out of the water, and the Knicks could be key players should long-term, pricey contracts be kept off the books.

Those are the pros. The cons are that the team will likely stink again in 2020–21, and that this is not the swiftest path towards competing. With all the flexibility the team maintained last summer, it is unclear that stinking it up lends itself to the development of young players. To say that the lack of growth from young players last year was solely because the team stunk dismisses obvious context, like poor coaching early on, and a front office trying to keep its job. Still, the best short-term outcome of maintaining flexibility likely means that we will see R.J. Barrett, Mitchell Robinson, and the 2020 draft pick get the stuffing beat out of them in 75% of games next season in the hope that veterans on the roster can be flipped for assets.

Given the names that are going to hit the market in 2021 and the uncertainty surrounding salary cap projections, the argument could be made that cap space is the most important asset to have heading into next summer. If the goal for the organization is to pursue a star, this is likely the most straightforward route. Since the Knicks have tried that method in the past to no avail, it is nice to know the organization could hold one of the best positions in the league in terms of future talent acquisition should Leon Rose choose to maintain flexibility this offseason.

As one of only four teams with spending power this offseason, the Knicks could also capitalize on this opportunity to improve the standing of the organization. Despite this free agency class not commanding the name recognition of past classes, there are still several avenues the team could pursue to chase respectability.

With so little dry powder at teams’ disposals to sign big names, veterans with large player options are likely to opt-in and take security and a large payday instead of trying to find a bigger one. This means that players like DeMar DeRozan, Gordon Hayward, Andre Drummond, and Mike Conley are unlikely to hit the market this offseason.

Instead, the only star-caliber player that will be available is first-time All-Star Brandon Ingram, who will be hitting the market as a restricted free agent. While the Knicks can (and should) throw a large offer sheet at the 2019–20 Most Improved Player award winner, it seems extremely unlikely that the Pelicans would not do everything in their power to keep the swingman paired with Zion Williamson.

While this might not be the offseason that the Knicks acquire a star, the team has a wide variety of needs it should address before next season. The most important is undoubtedly shooting. As luck would have it, the wing position is the deepest in this year’s free agency class. There are four supreme options, listed in order of most desirable to least, that the Knicks should be willing to sign to sizable deals of reasonable length: Davis Bertans, Danilo Gallinari, Bogdan Bogdanovic, and Joe Harris.

Bertans basically reinvented the Wizards’ offense when he was on the floor last year. The Latvian big averaged 8.7 three-point attempts per game and connected on 42.4% of his attempts, good for fourth best and sixth best in the NBA, respectively. Bertans excels at shots well beyond the three-point line, which stretches the defense considerably and makes things much easier for teammates, evidenced by the 113.6 Offensive Rating the Wizards posted with Bertans on the floor vs the 106.5 rating when he sat.

Gallinari delivers similar marksmanship with a few more developed offensive facets to his game. The former Knick shot 40.5% on threes last year while averaging close to 30 minutes per game on a team that made the playoffs in the ruthless Western Conference. As far as Bogdanovic and Harris go, I flip-flop on the order of preference. Harris is probably better now, but Bogdanovic is more obtainable and lines up a little better with the organization’s timeline. Acquiring any of these shooters would demonstrate to players around the league that New York is committed to improving and modernizing its game.

Other average floor-spacers can be found this offseason. Bryn Forbes, Maurice Harkless, Morris Sr., Langston Galloway, and Jordan Clarkson will all be available. Signing any of these players to friendly deals will maintain the aforementioned flexibility that could prove useful down the line. Fliers could be taken on wings like Wilson Chandler, Josh Jackson, or Rondae Hollis-Jefferson, although it is unlikely that any of these players would significantly alter the trajectory of the franchise.

Aside from shooting, the Knicks should make a concerted effort to get Toronto Raptors point guard Fred VanVleet. VanVleet could be the stable floor general the Knicks have been looking for seemingly since the turn of the century. The 2019 NBA champion is bound to attract suitors from teams all around the league, but if the Knicks are able to offer him the most incentive, he could be taking the floor at Madison Square Garden next season. The only other appealing options at point guard this offseason are Goran Dragic, who will likely be with the Miami Heat or some other contender next year, and Kris Dunn, who is at best a solid role player and whose skills directly overlap with Frank Ntilikina’s. If the Knicks cannot get VanVleet and are looking to secure the point guard of the future, the draft or the trade market are the best options to pursue.

As far as the big man market looks, there are a lot of interesting names that do not make sense for the Knicks. Marc Gasol, Serge Ibaka, Paul Millsap, Dwight Howard, and Tristan Thompson will all likely sign with contenders either through the mid-level exception or on more team-friendly deals. Christian Wood and Montrezl Harrell are very interesting names, but questions abound about whether the value they would bring to a rebuilding team like the Knicks that struggles with shooting would outweigh the steep salary both are likely to command.

Two complete wild cards I would like to see the Knicks kick the tires on for very low cost deals are Harry Giles and Thon Maker. Both are unknown quantities that would not likely cannibalize Robinson’s minutes too much.

The third strategy the Knicks could consider heading into this offseason is to act as a dumping ground for some of the league’s worst contracts, taking them on as the price for oodles of picks or young players from teams desiring to avoid footing an egregious luxury tax bill. Windhorst pointed out that “some teams facing deep red ink might have to prioritize cutting salary over basketball decisions.”

That lends itself well to a recent report by Ian Begley of SNY:

Knicks are open to using their 2020 cap space to trade for an undesirable contract, per SNY sources. NYK has communicated as much to teams recently, sources say. More here: https://t.co/g017s0LmGc

This is a route that many thought the Knicks would consider after missing on Kevin Durant and Kyrie Irving in 2019. According to reporting by Adrian Wojnarowski and Zach Lowe of ESPN, the salary cap is expected to stay around $109 million for the 2021 offseason in order to avoid a salary cap spike similar to the one that upended the league in 2016.

This positions the Knicks well to follow what the Brooklyn Nets did when they owed first-round picks to the Boston Celtics. Taking fliers on unproven young players and acquiring picks by absorbing bad salary from around the league would still allow New York’s current core to get reps every night, while steadily building a cache of assets that can be cashed in for a star-caliber player.

Heading into this offseason, the Knicks are well positioned to set the organization up for success during the 2020–21 season or down the road. They can do so by maintaining flexibility, acquiring talent, or absorbing contracts in the interest of acquiring young players and picks.