Is Onyeka Okongwu the Talented Big Man the Knicks Change Plans to Draft? 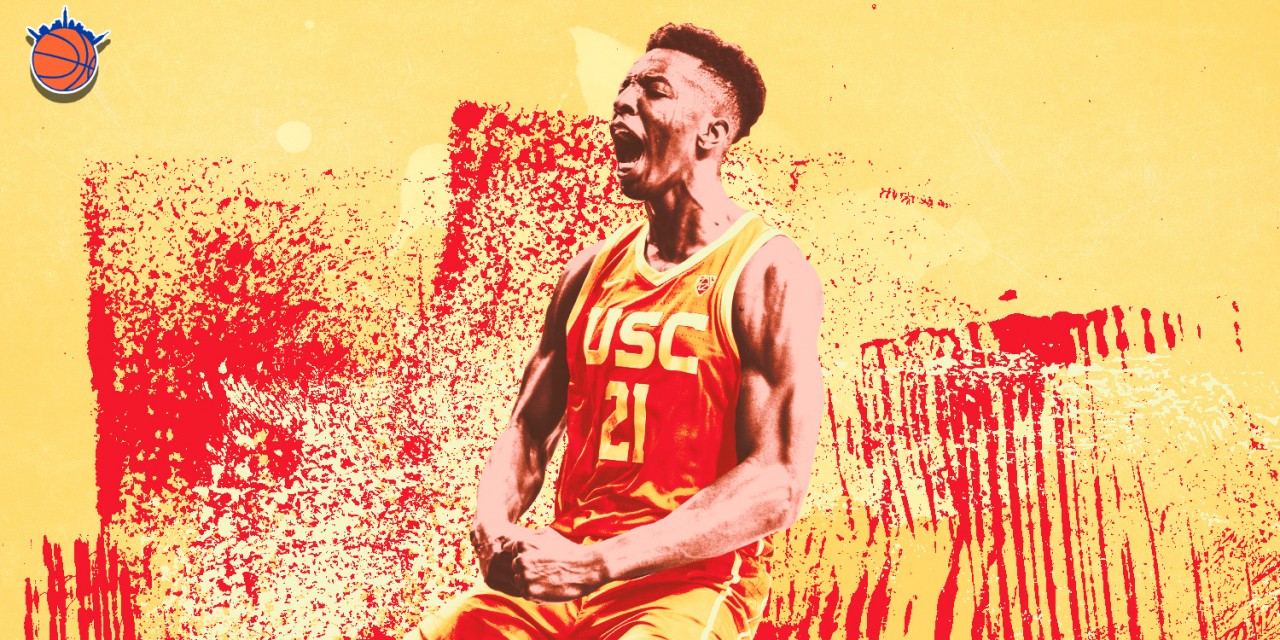 USC big man Onyeka Okongwu is one of the most impressive and cerebral players of this NBA draft class. Should the Knicks buy in now?

Onyeka Okongwu is used to flying under the radar. Despite spending his high school years playing for Chino Hills, in the immediate radius of the rapidly growing fame of Lonzo, LaMelo and to a lesser extent, LiAngelo Ball, ‘Yek is in some ways the exact opposite of the “Ball In The Family” star/potential top pick. He’s not polarizing in any way, he’s not a natural media attraction, and his game isn’t full of the same question marks that litter Ball’s draft profile. In a word, he’s safe.

Of course, “safe” can mean a lot of things in the draft. Sometimes it means an older, ready-made player, other times it’s a substitute for “low-ceiling.” Neither of these definitions are the case for the 19-year-old, 6-foot-9 center. Okongwu is “safe” in the sense that there is very little likelihood of him not becoming a productive NBA player. Does that mean he’s a guaranteed starter? Of course not, few prospects can claim that level of certainty, but Okongwu’s skill set seems tailor-made for what the modern game demands of its big men.

So, let’s take a look at some of the attributes that make Okongwu such a promising player, the areas in which he struggles, and whether he makes sense with the current trajectory of the New York Knicks or not.

While it might not be the sexiest skill on the hardwood, Okongwu’s ability to go into a scrum of arms and bodies and come out with the ball is pretty special. Much like Mitchell Robinson, he uses his great timing and quickness off the floor to tip the ball to himself, sometimes multiple times, to keep it away from his opponents and give himself second and third chances at hard to reach boards. He showed an extremely impressive combination of instincts, hustle, and nose for the ball, which allowed offensive rebounding to maybe be his greatest strength in a season full of stellar play.

Okongwu also shows great promise in the pick and-roll. At 6’9″ with a 7’1″ wingspan, he might not have the elite measurables of the Robinsons and Rudy Goberts of the league, but he has great bounce and touch around the rim—and unlike our beloved Block Ness Monster, he actually makes contact on his screens. But similar to Mitch, his greatest strength as a roll man might not actually be his athleticism, but rather his unbelievable hands. Okongwu can corral all types of wayward passes, and makes quick moves once he does. That attribute, combined with his top-end touch around the rim, make him a deadly play finisher close to the basket.

Because of the abilities mentioned above, Okongwu spent much of his freshman dominating from the post. While he’s not Joel Embiid, who drew comparisons to Hakeem Olajuwon for his post prowess coming into the NBA, Okongwu shows advanced footwork, a nasty spin move, and is comfortable finishing over either shoulder with either hand. The death of the post-up big man archetype is well-documented, but the need for a guy coaches can give the ball to and say “go get us a bucket” hasn’t gone away, and ‘Yek definitely fits the bill.

He does have some things to clean up in his post game, though. He tends to bring the ball low, which can lead to weak-side strips, and without overwhelming size or overly advanced counters, he can get himself in trouble when he doesn’t make quick decisions.

No one is going to mistake Okongwu for the second coming of Arvydas Sabonis, but the Big O flashes most of the requisite passes needed to keep defenses honest, including high-low feeds to another big man, kick-outs to shooters, and even more advanced reads to the corners and wings. Having played alongside a second true big man for most of the season, Okongwu learned how to move the ball quickly and developed a nice chemistry working the two-man game with center Nick Rakocevic. He times his feeds well and does a nice job not forcing the issue, and while he’ll never have an offense built around his passing, there’s a lot to like.

Okongwu has decent touch on his runners and shot an okay clip at the free throw line, but make no mistake, he’s not entering the NBA as any semblance of a stretch big. He attempted four three-pointers the entire season and the only one he made was a three-quarter court heave to beat the clock. And though he shot 72% on 143 free throws this year, his misses tended to be erratic and come off the rim very hard, which makes it harder to be as optimistic about his shooting projection.

He actually showed nice touch on his mid-range jumper at times, but those times tended to exclusively occur at the end of shot clock situations.

I wouldn’t be surprised if ‘Yek eventually got to the point where he’s an average shooter, but it will take time and it will probably never be a comfort zone.

Okongwu wasn’t usually tasked with creating off the dribble outside of post and there’s good reason for that. He can at times look like a deer in the headlights when left alone with the ball at the top of the key, and his limited ball-handling can make him very predictable.

That said, he moves well in a straight line and even showed some flashes of creativity. Watch this opening stretch against Arizona for a full glimpse of the appeal of Okongwu on both ends:

The filthy Euro step, the tough pass threaded through the arms of the defenders, the monster block, the kick-out to his shooter, these are all the things you want from your center, and they’re a big part of why a lot of smart people have him as a top-tier prospect in this year’s draft.

Now let’s move on to his defense.

Simply put, ‘Yek is a beast at the rim. He’s dangerous coming out of the post and challenging drives, and equally dangerous defending one-on-one post plays. His comfort zone is defending in post, which he keeps locked down, playing bigger than his size.

Given his fluidity and timing, he should be a high-level rim protector both as a primary and a weak-side defender.

That said, there are some significant technique issues he’ll need to clean up to reach his potential. For such an impressive defensive prospect, his post positioning can be extremely poor, routinely ending up giving up an open lane to the rim by coming too high over the top, for which even college point guards could easily punish him.

He also can get very jump-happy and impatient defending in the post. Fouling was a bit of an issue for Okongwu, and a lot of them came at unnecessary times as a result of jumping to contest shots instead of just using his verticality. Top-40 prospect Zeke Nnaji, while playing at Arizona, seemed to pick up on this weakness and pump-faked Okongwu into oblivion during their matchups, often to good result.

Okongwu’s pick-and-roll defense was sort of a mixed bag this year. He’s got great foot speed to stay with guards and should legitimately be able to switch for a play or two at a time, but whether due to scheme or just lack of technique, the big man would find himself behind the play too many times, usually because his hedges were so far out and so slow. Often he seemed flat-footed and slow to react, which is surprising.

He’s able to get back into most plays because he’s smart and quick but it still puts his team at a disadvantage. In the end, a good coach should be able to clean up most of these habits, but if not, he’ll struggle in pick-and-rolls at the next level.

Thanks to the aforementioned impressive blend of speed and instincts, Okongwu is able to bother shooters off the dribble in a manner that bodes well for his defensive versatility at the next level. He gets to shots quickly and covers ground faster than you might think. His combination of speed, agility and shot-blocking is one of the main reasons he’s drawn comparisons to Miami’s Bam Adebayo, and it’s not entirely unfounded.

But once again, while the physical characteristics are all there, the technique is sorely lacking. Sometimes it seems like because Onyeka doesn’t shoot, he forgets that other big men do. His closeouts are pretty lazy or nonexistent, and he often drops back way too far off shooters, as he did with Nnaji multiple times during their match-ups.

While these are all real concerns, the truth is that there’s no such thing as a perfect defensive prospect, and the fact that Okongwu has great feel for the game along with all the athletic tools required means that all he needs is a coach (my guess? Steve Kerr) to teach him the ins and outs of defensive discipline. If you’re placing bets, bet on him becoming at least an above-average defender in time.

The one concern that can’t be coached out of him is the trouble he has with the bigger big men in college. He struggled against Nevada’s 6’10” Johncarlos Reyes, 6’11” Nnaji, and 7’0″ Lars Thiemann out of Cal, and was put in the torture chamber all game long against fringe first-rounder Isaiah Stewart.

While the days of “Twin Tower” lineups are, for the most part, behind us, the team that takes Okongwu will probably need extra size on deck for occasional matchups.

Fit With The Knicks

And now we get to the real heart of the issue: how well does he fit with the current direction of the Knicks? In this writer’s opinion, Mitchell Robinson and Onyeka Okongwu, while possessing the potential to be truly dominant defensively, would likely be untenable on offense, especially with the shaky shooting of R.J. Barrett, the team’s other cornerstone.

That said, everything depends on how the order of the draft shakes out. Okongwu is probably the third-best prospect on my board, so if the Knicks pick sixth or seventh and he’s somehow still available, it would be foolish not to take him because of his questionable fit with Mitchell Robinson, who may or may not be the better young center. In general, drafting for fit in the top-10 is usually a mistake (and is how you end up, say, skipping Shai Gilgeous-Alexander in the draft in favor of Kevin Knox because the team already has a young point guard on its roster), and this is a Knicks team in desperate need of high-level thinkers in their young core. So while the fit is nowhere near ideal, it also shouldn’t be enough to dissuade Scott Perry and Leon Rose, should he be available in the mid-lottery.