Shooters Shoot: Saddiq Bey Would Be an Excellent First-Round Draft Grab for the Knicks 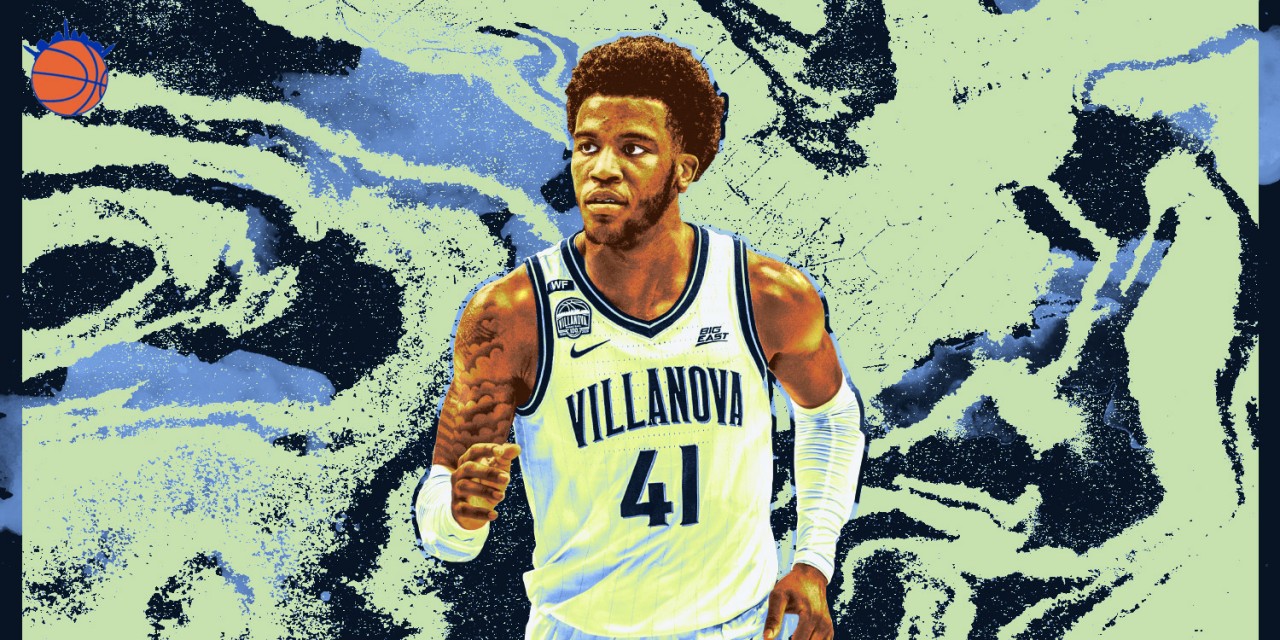 Villanova’s Saddiq Bey could be a major role-player piece for the Knicks if he falls in their laps with their later pick in the 2020 NBA Draft.

After Saddiq Bey enjoyed a promising freshman season in 2018–19, it became clear that the Largo, Maryland, native had a bright future, one that could potentially wind up in the NBA in a few years—perhaps after he got his degree.

Instead, Bey expedited the process, returning with a sensational sophomore season, one that put him on the national radar, shot him up mock NBA drafts, and placed him well into the pro-level conversation.

He came to Villanova ranked just outside of the top 100 in the high school class of 2018. The 6-foot-8 forward quickly cracked the starting lineup as a first-year player and emerged to the forefront in his second season.

This past year, Bey averaged 16.1 points, 4.7 rebounds, and 2.4 assists per game. He shot 47.7% overall on the floor with an impressive 45.1% shooting clip from beyond the arc. He was named first-team All-Big East and was given the Julius Erving Award, an accolade given to the top small forward in college basketball.

Although we didn’t get to see what Bey could have done in the NCAA tournament, he was already able to leave a firm lasting impression on NBA scouts, who quickly caught on to his upward trajectory midway through the season. For those who missed the hype train or unfamiliar with Bey, here’s what we can expect moving forward.

Three-point shooting: Feels like everyone has to be able to shoot threes nowadays, right? Bey can answer the call from long range for the Knicks, proving to be dangerous from deep and even more so when he’s able to heat up.

The pushed-back college three-point line wasn’t an issue for Bey in his second season, boosting his three-point percentage by nearly eight percent, all while taking even more threes than he did as a freshman. He’s got the range, so much of it should translate over to the professional level.

If the Knicks, or whoever is in need of a perimeter scoring threat, are able to pick him up in the draft, he’ll certainly be able to provide that scoring punch from downtown.

This is an area that the Knicks will certainly look to improve. This season, New York ranked dead last in the NBA for made three-pointers (631) and in the bottom five league-wide for shooting percentage from deep (33.7%).

Bey has also delivered in the clutch, hitting some key shots late-game. He’s a talented scorer, but there’s no doubt that he excels the most from long range. He’s comfortable shooting off of screens, pulling up off the dribble, or in the catch-and-shoot.

Two-way versatility: Versatility is key in today’s NBA, and Bey certainly fulfills that attribute on both ends of the court. Offensively, not only is he an efficient three-point shooter, but he can also back his opponents down and bully his way inside. He’s a great scorer and can do so in a variety of ways. He can even facilitate if needed. Bey played point guard growing up, until a growth spurt in high school gave him a forward’s build.

Playing point guard allowed him to develop solid court vision and knowledge of the game from that perspective. This past season, Villanova head coach Jay Wright tapped into that side of Bey even more. Although he wasn’t the primary point guard, Bey was used as a point forward in various occasions, running pick-and-rolls, facilitating the offense, and showcasing that he still has the ability to set up others. Bey kept his turnover rate rather low, only coughing the ball up 1.5 times per game.

Gorgeous wraparound pass in PNR by Saddiq Bey. With his passing and handling at his size, he's in the first round range for me: pic.twitter.com/bh6maF91Ji

Defensively, his great basketball I.Q. also carries over to this side of the court. Bey typically got the first crack at opposing teams’ top players, from scoring machines like Marquette’s Markus Howard and Seton Hall’s Myles Powell to Kansas’ top-scorer in Devon Dotson. When matched up on them, Bey was able to put the clamps on, not only proving his status as a great defender, but also the ability to hinder a variety of players. He has the footwork and awareness to keep up with quicker, smaller guards, or go up against guys his own size.

With switches happening all the time in the NBA or a variety of different lineups being deployed, players have to be able to guard multiple positions, and Bey can certainly do just that. At the next level, he should be able to take on 1’s to 3’s comfortably, with some or most 4’s.

Limited athleticism: Bey is a good enough athlete, with a solid physical frame and build, but the limits to what he can do does come out in certain situations. Bey doesn’t have an explosive first step, so he’s not really going to get by his defender. He’s been able to make up for this by bullying his way in, basketball I.Q., or just relying on his strength. However, with the lack of that explosive first step, defenders have been able to keep up with him when he drives to keep the pressure on. More often than not, he’s able to just finish through it, but when he doesn’t, the deficiency appears to hamper him on his path to the basket.

He’s also not the greatest shot creator for himself, relying once again on his physicality, motor, strength, basketball I.Q. to fill the difference, but when the level of competition and athleticism elevates in the NBA, how will this affect certain areas of his game?

Passivity?: Maybe that’s the right term for it, but it doesn’t exactly encapsulate the problem. For someone with Bey’s build and motor, it feels like certain stat categories could have been a lot higher. With the game embracing analytics and numbers, Bey has shown that he can be a great defender with the way he’s able to limit opposing assignments’ efficiency and shooting percentages, but why doesn’t he generate more steals and blocks?

Also, while his scoring and shooting percentages shot up, his rebounding rates and numbers went down. He averaged 5.1 boards per game as a freshman to now just 4.7 rebounds per game.

If you’re someone who likes to see concrete numbers over intangibles, this may be an area of concern.

Although passive may not be an accurate term to fully describe Bey, as he’s singlehandedly taken over or carried the Wildcats in a variety of games this past season, you could argue that he could be producing more in those defensive and rebounding areas. Maybe you’d like to see more assertiveness there.

Saddiq Bey’s ascension as a sophomore catapulted him well into the first-round conversation. Even then, some don’t feel that he’s being talked about enough.

He projects as a stereotypical 3-and-D type of prospect and has drawn comparisons to Khris Middleton. Bey is widely predicted to go somewhere in the middle of the first round. He’s considered a “safe” pick, with a high ceiling, great intangibles, work ethic, and motor.

As for the Knicks, he’d be able to provide an immediate boost to perimeter shooting and defensive effort. However, with the Knicks slated to pick early and late first round, and Bey projected to fall somewhere in between, it’s likely that New York doesn’t even get a chance at him.

The Knicks first crack at the draft would be too early to use on Bey, but if the Villanova product is still on the board by the time New York goes again, he’d be worth a look.