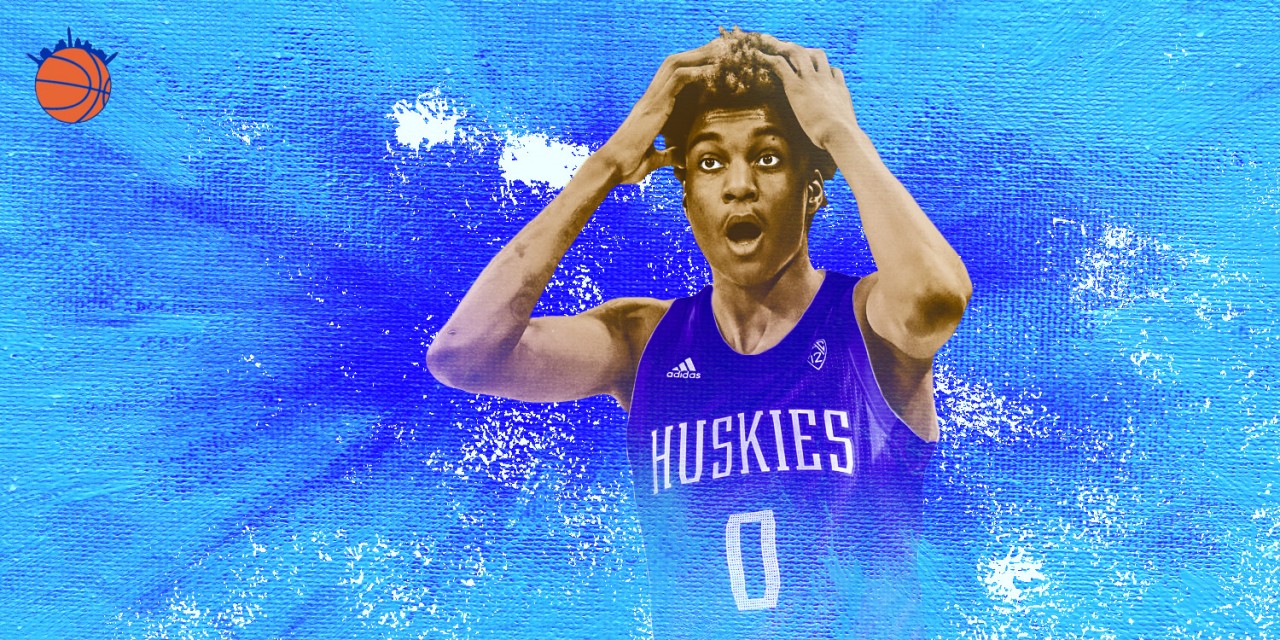 Washington Huskies forward Jaden McDaniels had one of the strangest seasons in college remains a raw talent in the NBA Draft for the Knicks.

Can Jaden McDaniels be a replacement for Kristaps Porzingis as the Knicks’ stretch four of the future?

Coming out of Federal Way High School in Washington, McDaniels was one of the most sought-after players in the class of 2019, ranking seventh on the ESPN 100 list. The five-star recruit’s freshman year at Federal Way was marred by an elbow injury, causing him to shoot left-handed for the season. It all went uphill from there, though, as McDaniels led the team to a 63-game winning streak and won Washington Gatorade Player of the Year, averaging 23.3 points, 10.0 rebounds, 4.0 assists and 2.0 blocks per game his senior year. McDaniels opted to stay in his home state and attend the University of Washington, following in the footsteps of other Seattle-area stars like Isaiah Thomas and Nate Robinson.

McDaniels’ one and only season as a Husky was an adventure, showing signs of stardom some games and disappointment in others. The freshman was relegated to the bench midway through the season after starting 21 games. Ultimately, McDaniels ended up averaging 13.0 points and 5.8 rebounds, per ESPN Stats, on a Washington team that fell well short of expectations, finishing last in conference play. The forward opted to take his talents to the NBA and is projected to be a first-round pick, due to his exceptional versatility, physical skills, and upside.

Jaden McDaniels is one of the most physically intriguing prospects in this draft class. At 6’10”, he possesses a lot of skills you don’t usually see out of a player that tall. He also contributes in many facets of the game and does a lot of things well.

Perhaps the most intriguing aspect of McDaniels’ game is his potential to score from all three levels. His handles are also very impressive for a guy of his stature, allowing him to create his own shot. He shot a respectable 34% from behind the arc, per ESPN Stats, while also showing that he is dangerous from the midrange; a lost art in today’s game. His ability to finish at the rim is questionable, but there is definitely potential there for him if he becomes more of an alpha.

McDaniels is an athletic marvel, moving exceptionally well up and down the court and displaying great fluidity both offensively and defensively. Passing wise, he is solid and has shown the ability to be able to get the ball to the right guy at the right time. His guard-like traits could translate extremely well to the modern NBA, setting him apart from a lot of the other comparable prospects.

Additionally, McDaniels is a good rebounder, despite not having the best leaping ability or biggest physical stature. Defensively, he is instinctive and very quick on his feet to close out or contest shots. There is no doubt this kid has the arsenal to be a successful and versatile NBA contributor for many years.

The 19-year-old struggles with a lot of the same things you would expect out of a college freshman: overall inconsistency, lapses in judgement, and a non-NBA-ready body.

McDaniels was very up and down during his one-and-done season with the Huskies, looking like a sure-fire top-five draft pick some games and looking like a liability in others. The forward often looked overwhelmed at times, which led to him turning the ball over at an alarming rate (3.2 per game, per Brew Hoop).

Another issue for McDaniels was his lack of awareness and inability to reign in his emotions, as he fouled out eight times and racked up six technical fouls in 31 games, per ESPN Stats. In his defense, a lot of guys his age have some immaturity concerns and are still learning how to maximize their ability in a controlled manner.

The 2019–20 Huskies were a disappointing team, despite having very talented players like Isaiah Stewart on the roster. Their season ended with a 15-17 record and it seems like McDaniels, at times, fell victim to the losing aura surrounding Washington basketball.

Poor judgment at this stage is definitely fixable, and it shouldn’t be held against him too harshly, but these things aren’t ignored by NBA executives, who are about to invest millions of dollars in these kids, expecting them to carry themselves like professionals at all times.

Finally, McDaniels needs to add some size to his very skinny body in order to deal with the increased physicality and grind of the NBA game. McDaniels struggled to finish at the rim and will likely be pushed around at the pro level if he doesn’t work on his strength. Also, at this point, his perimeter shooting isn’t good enough to overcome his slender frame, so it would benefit him to make going to the weight room a habit.

The player who immediately comes to mind when watching Jaden McDaniels is Orlando Magic forward Jonathan Isaac. Both McDaniels and Isaac are super athletic, raw, and versatile players, who need(ed) to add muscle to their 6’10” frames coming out of college. Isaac has added some bulk, weighing in at 230 pounds this past season after coming into the draft process at 210 pounds, per NBADraft.net. After a slow start to his NBA career, the 22-year-old Isaac had the best season of in the suspended 2019–20 campaign, averaging 12.0 points and 6.9 rebounds per game, via Basketball-Reference. It seems like Isaac is rounding into a good NBA player and I anticipate McDaniels taking a few years to establish himself as well.

Another comparison you can draw is a less-skilled Brandon Ingram. Ingram also has a slight build, like McDaniels, but is able to overcome it with his unique offensive creativity and shooting ability. BI also took a few years to really pop after being selected second overall in 2016 out of Duke. Ingram was one of the most improved players in the Association this past season, increasing his scoring output from 18.3 to 24.3 points per game, per ESPN Stats.

I don’t believe McDaniels is as talented and has the same upside as Ingram, but if he can improve his perimeter shooting and become more assertive offensively, the Washington native can become a bona fide threat in the NBA.

With the Knicks likely picking very early on in the draft yet again, McDaniels would likely be a reach with the Knicks’ first pick. There are simply better players likely to be available, like LaMelo Ball, Anthony Edwards, and James Wiseman among others.

The fit would be ideal, given the fact that the Knicks are still looking to replace Porzingis with a skilled and versatile stretch four, but I cannot envision McDaniels going that early, especially after a rocky season in college.

To me, McDaniels is more of a mid-first-round pick and could possibly fall to 27 (the Knicks’ next selection), but I believe he is too talented and has to high of a ceiling to drop that far in the draft.