Is Aaron Nesmith a Viable Trade-Down Candidate for the Knicks? 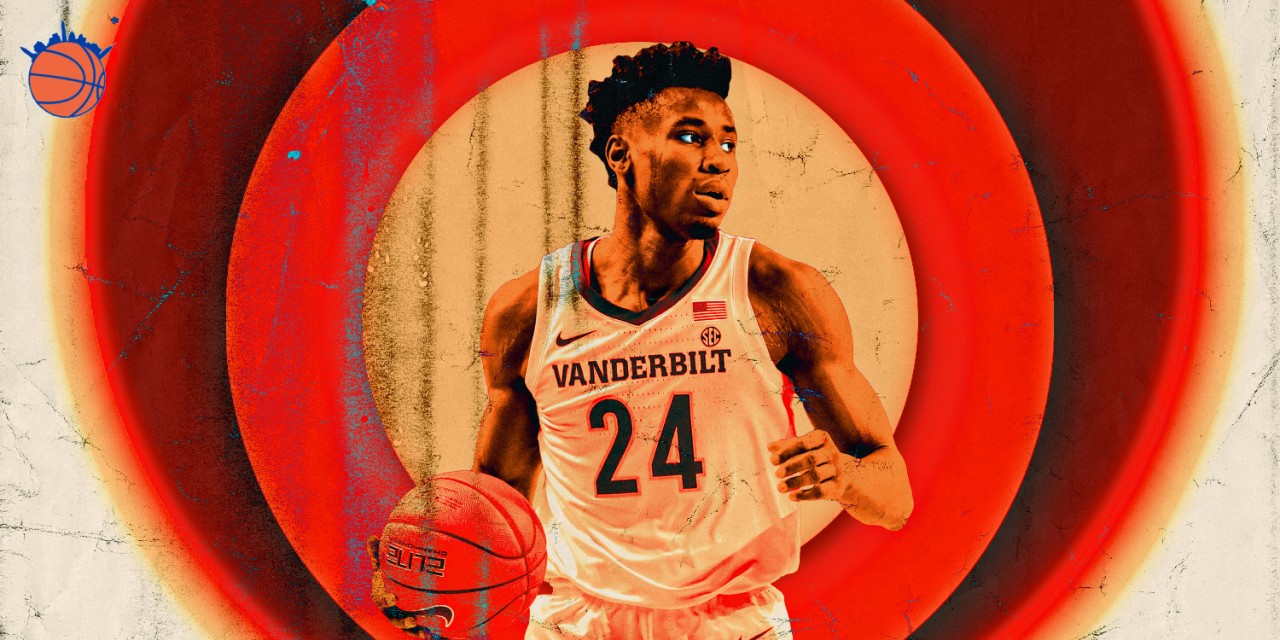 2020 NBA Draft prospect Aaron Nesmith is the subject of our latest profile, looking at how the Knicks would benefit from one of the best perimeter shooters in the class.

Three-point shooting. That’s one of the massive requirements for any player the New York Knicks bring into the organization in the near future.

The need for shooting has been beaten like a dead horse by Knicks writers and thousands of angry fans since the middle of the NBA season. The stats don’t lie. The Knicks have fallen behind the rest of the league when it comes to three-point shooting.

As mentioned in a previous article, the Knicks have ranked bottom 10 in the NBA in both three-point attempts per game and three-point percentage over the past four seasons.

One 2020 NBA Draft prospect who would be a massive help in the category of three-point shooting is Vanderbilt small forward Aaron Nesmith.

Nesmith is a player that has flown under the radar due to the fact that he was injured for most of the 2019–20 college basketball season and played for a team that finished at the bottom of the SEC. Let’s take a deep-dive into Aaron Nesmith as a prospect.

If you’re ranking three-point shooters in the NBA draft, there’s a decent chance that Aaron Nesmith would be no. 1. After shooting 33.7% from deep on 5.5 attempts per game in 33 games in his freshman season at Vanderbilt, Nesmith took it to the next level in his sophomore season, shooting 52.2% from three on 8.2 attempts per game in 14 games.

⁦@VandyMBB⁩ Aaron Nesmith translate to the NBA—easily. But he hasn’t played since January 8. Yet he still moved up in the mock ⁦@NBADraft⁩ an average of 15 spots since then. It’s that kind of draft. 🏀😉 pic.twitter.com/yR9NVEK1wO

The NCAA’s leader in three-point percentage was at 47.7%, so there’s a very good chance that if Nesmith didn’t play only 14 games and was able to qualify for this list, he would have been first.

As a result of this high-volume three-point shooting, Nesmith averaged 23.0 points in 35.7 minutes per game this past season at Vandy. He shot 51.2% from the field and 82.5% from the free throw line to go along with his insane three-point percentage.

Given Nesmith’s off-the-chart shooting, it’s hard to see how he doesn’t carve out a role for himself in the NBA almost immediately. The only question with Nesmith’s shooting would be if he could sustain it over a longer period of time than just 14 games.

Nesmith is 6’6″ with a 6’10” wingspan. This helps him to be a solid defensive player, both on-ball and off-ball.

One stat that jumped off the page on Nesmith was that, according to The Stepien, his opponents only shot 20-of-48 (42%) at the rim when he was the primary or secondary defender.

It’s clear that when Nesmith is on the floor, he’ll be able to hold his own defensively, even with players that are a bit bigger than he is.

Here’s a highlight montage from Nesmith’s game versu. Austin Peay that shows some nice defensive plays in addition to his lights-out shooting:

Nesmith appears to be a player that can be very good within his role of a 3-and-D athlete, but not much beyond that. It’s hard to see Nesmith becoming a creator, as his handle isn’t great, and finishing at the rim is subpar.

Of those 56 shots, he only made 22 of them. Furthermore, Nesmith only had seven total isolation plays offensively in his 14 games played. While he scored on five of those, it’s still an area of his game that’s lacking.

Without much of a game inside the three-point line, Nesmith will likely be a three-point specialist on offense. There’s nothing wrong with that, but it limits his ceiling as a player, which makes him being a lottery pick questionable. Three-point specialists are extremely valuable, but why take one in the lottery when you can find one later down in the draft?

If you’re an NBA franchise and you have a lottery pick, you want to take a player that can potentially grow into a top three or four player on the team at some point. The late first round and second round is the area where you want to take role players. While I have confidence in Nesmith’s ability to be a good NBA player, I have doubts about his ability to be more than just a role player. He would need to fall into the perfect situation.

Nesmith’s passing is one aspect of his game that contributes to his limited ceiling. He only averaged 0.9 assists per game last season. When he catches a pass, he always appears to be looking for his shot, not as much his teammates. His passing comes when there’s no open shot, but rarely are these passes ever setting up teammates.

Overall Takeaway and Fit with the Knicks

As of now, it appears that Aaron Nesmith is going to be drafted somewhere in the 10-20 range. The best case scenario for Nesmith is that he lands with a team that needs shooters or has had success with players like the former Commodore. The landing spots that make the most sense are no. 13 to the Pelicans or no. 20 to the Heat.

However, if Nesmith were to take a fall down the draft, and was available at no. 27 for the Knicks, it would be a no-brainer to take him. While I give that slim-to-none chances of happening, the other scenario where the Knicks can grab Nesmith would be a trade down from eight or a trade-up from 27.

In 2017, the Kings traded no. 10 for picks 15 and 20, where they selected Justin Jackson and Harry Giles in exchange for Zach Collins. The Knicks could do a similar trade to that—or they could package picks 27 and 38 to trade up to the 10-20 range.

In any of these scenarios, Nesmith would be a good fit for a Knicks team that is desperate for three-point shooters. If the Knicks were to take Nesmith, they would need to take a playmaker/ball handler with the other pick(s).

If the Knicks don’t get Nesmith, Devin Vassell at no. 8, or a player like Desmond Bane or Isaiah Joe at 27 or 36 could fill the role that Nesmith would have.