Does Cole Anthony Fit as Knicks’ Point Guard of the Future in the Draft? 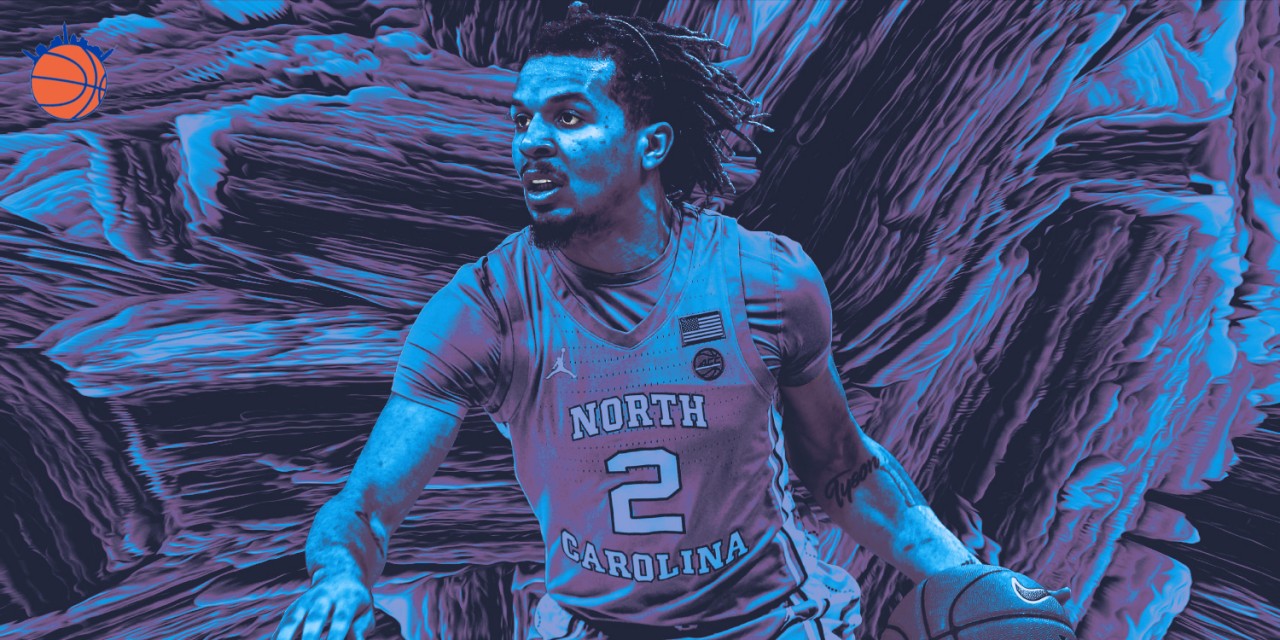 Cole Anthony noticeably struggled on a bad UNC team in his lone NCAA season. He may be an option for the Knicks in the backend of the lottery.

One year ago, University of North Carolina guard Cole Anthony was one of the most hyped incoming freshman in college basketball. Son of former NBA player and New York Knick Greg Anthony, Cole was rated the fourth overall prospect in 247Sports’ Class of 2019 composite recruiting rankings. Not only was Anthony ranked high, but he’s a local kid who went to Archbishop Molloy High School in Queens from ninth grade through 11th grade.

Before the 2019–20 college basketball season, it just seemed too perfect. If the Knicks were going to have a rough season, at least they’d have a chance of getting Cole Anthony if they landed the first overall pick.

Now, after Anthony and North Carolina’s rocky season, Anthony isn’t supposed to be the top pick, let alone top-five. With the Knicks having the sixth best odds to win the lottery, the only chance Anthony ends up a Knick is likely if the team picks at six, seven, eight, or nine. Unfortunately, there’s a 62.7% chance that happens, compared to the 37.2% chance of landing in the top-four.

Out of all the prospects that I’ve watched so far, Cole Anthony is the hardest to evaluate, and it’s not particularly close. Let’s jump into his strengths and weaknesses, which will highlight why this is the case.

When looking at NBA Draft prospects, shot creation is extremely important if you’re drafting in the top 10 and looking for a franchise cornerstone. If the game is on the line, can you give that player the ball and expect him to get a good shot? Cole Anthony would in all likelihood get a good shot. There’s no doubt that his shot creation is NBA-ready.

Anthony uses his quicknesses, strength, and handle to create shots for himself. As you can see in the clip above, Anthony uses these traits to create space on the defender with the shot clock running down.

The trait I’m highest on with Cole Anthony is his shot creation. It’s extremely good. pic.twitter.com/meY1S96JDo

Anthony’s athleticism is exceptional, which helps to make his creation so good. It doesn’t always jump off the screen at you; he still has room to grow in terms of utilizing this speed, quickness, leaping ability, and strength in his game more.

You can always trust Cole Anthony to get to the free throw line. He averaged 5.8 free throw attempts per game, 128 total on the season. This ranked ninth in the ACC despite Anthony missing 11 games with a knee injury.

Shot creation on display again. This time an and-one. pic.twitter.com/QsavrmnlRD

In the video above, Anthony makes getting to the basket look easy as he hits the floater despite getting fouled. While his shot creation is phenomenal, it doesn’t always mean the shots are actually falling. That will be discussed later in this profile.

Despite being surrounded with limited talent on a North Carolina team that went 14-19 overall and 6-14 in-conference, Anthony still averaged 4.0 assists per game during the 2019–20 season.

Watching Anthony make some of the passes that he did throughout the season was impressive. He sees the floor well, and it wouldn’t be surprising if it results in Anthony averaging six or seven assists per game at some point in his NBA career.

A few Cole Anthony clips that stood out to me (THREAD):

Anthony does a great job to recognize the double team and immediately knows what he’s going to do. Great cross court pass leading to the 3. I’m high on his passing and vision. #UNC #NBADraft pic.twitter.com/veOpxiH8sK

In the clip above, Anthony does a great job of recognizing the double team is coming before the ball his even in the air. As a result, he sees a wide open Brandon Robinson across the court, and knows where he’s going to pass before even catching the ball. Anthony throws a solid pass, and Robinson hits the three.

This play was perfectly executed by Anthony, and he finds Garrison Brooks wide open off the pick-and-roll.

For a 6’3″, 190-pound point guard, Anthony is a great rebounder. He averaged 5.7 rebounds per game during the 2019–20 season. This ranked 25th in the ACC and sixth amongst guards in the ACC. Out of just 22 games played, Anthony had 10 or more rebounds in four of them.

Anthony’s shooting numbers are a main reason why he has a chance to fall outside the top-10 in the NBA Draft. Despite averaging 18.5 points per game, Anthony shot only 38.0% from the field, 34.8% from deep, and 75% from the free throw line. His true shooting percentage was only 50.1%.

Given the fact that Anthony shot 6.4 three-pointers per game, his percentage from downtown isn’t that bad, but the percentage from the field and free throw line need to be drastically improved.

The one aspect of Anthony’s shooting that is efficient is his jump shots. According to NBA.com, Anthony scored 1.04 points per jump shot, which ranked in the 79th percentile in college basketball. There’s no doubt that Cole Anthony is a good jump shooter, but if he’s that good in that area of the game, how can it be that his field goal percentage was that low?

The answer is that his shooting percentage at the rim was horrid at 39.1%. To put in perspective just how bad that is, Damian Lillard shot 61.8% at the rim in the NBA in 2019–20 and Russell Westbrook shot 64%. Those are the a couple of the best finishers at the rim in the league, but to look at some mid-to-low level guys, Elfrid Payton shot 57.5% at the rim and Frank Ntilikina shot 56.7%. Dennis Smith Jr. shot 54.3% at the rim in 2019–20 despite his struggles as well.

It’s hard to see Cole Anthony succeeding in the NBA unless he can improve upon that tremendously. Finishing at the rim is only going to be harder in the NBA, where the competition is bigger, faster, and more talented.

It wouldn’t be a stretch to say that Cole Anthony is a disaster defending off-ball. There are several plays where he loses his man, or doesn’t switch correctly, leaving a wide open shooter as seen in the clip below.

Defense is a problem for Anthony, more so off-ball. This happens way too often. Completely loses his man leading to a wide open 3 for VTech. pic.twitter.com/TnmZCQ1zL9

Here’s another play against Ohio State where a very similar sequence happens:

Again, not exactly sure what’s going on here on defense. Similar to the first defensive play in this thread from Cole Anthony. pic.twitter.com/v5MWtQJGHD

There was no reason for Anthony to leave his man in this scenario. If these college players were shooting like the players in the NBA bubble, then Anthony’s costing his team three points each time.

In terms of on-ball defense, Anthony is average. According to NBA.com, Anthony allowed 0.67 points per isolation possession, which ranked in the 63rd percentile in college basketball. Additionally, Anthony’s instincts are solid as he averaged 1.3 steals per game in 2019–20.

Anthony’s bad outweighs the good on the defensive side of the ball. If he doesn’t know who to guard when there’s simple ball movement by the opposing team, then it’s going to be hard for him to find many minutes in the NBA.

Fit on the Knicks (Overall Takeaway)

In order for the Knicks to have a successful future, they must build around R.J. Barrett and Mitchell Robinson. The team is going to need a pass-first point guard in order for that to happen. If that point guard isn’t pass-first, then he cannot be a high-usage player, as Barrett is a guy who needs the ball in his hands a lot to make things happen.

This past season, Cole Anthony’s usage percentage at North Carolina was 30.0%. Combine that with Barrett’s usage of 24.0% and the Knicks are going to have a lot of problems. Additionally, the Knicks have already had plenty of problems with players who are inefficient and can’t play defense. They don’t need that once again.

If Anthony is drafted to the Knicks, or any other bad team with young players, he’ll end up averaging an extremely inefficient 13-15 points per game, which will immediately stunt his growth as a player. The best case scenario is for Anthony to land with either Phoenix, New Orleans, or Boston—good teams that will likely be selecting between picks 10-14 in the NBA Draft.

This way, Anthony can spend the proper time developing and coming off the bench, rather than being forced into big minutes early in his career on a bad team. In my opinion, that would be among the only ways Anthony ends up succeeding in the NBA.

If there’s one message I’d have for the Knicks front office regarding Cole Anthony, it’d be short and to the point: Stay away.

»READ: Kentucky guard Tyrese Maxey is worth keeping tabs on

»READ: Duke’s Tre Jones projects to be a perfect plug-and-play offensive facilitator in the draft