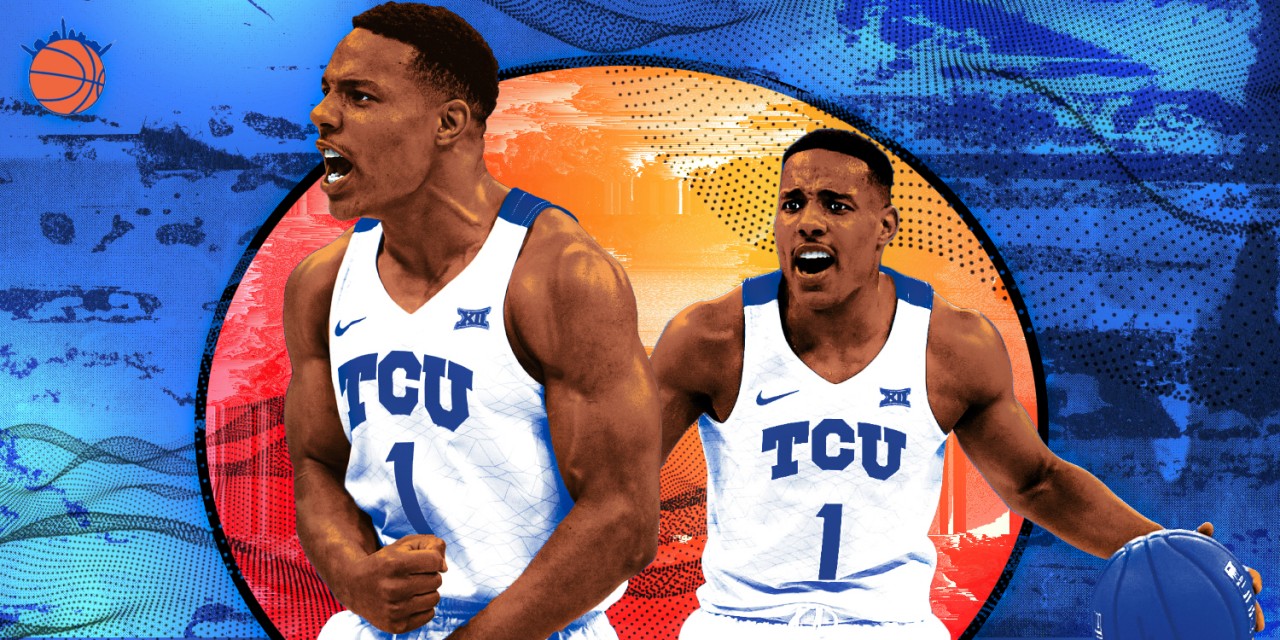 Desmond Bane would be a sure-fire great addition to a developing Knicks team that requires perimeter shooting and defense.

Richmond, Indiana, native and former TCU Horned Frog shooting guard Desmond Bane is not a household name compared to his other draft counterparts, but the 22-year-old has the potential to be an extremely valuable pick up in the late first or second round of the 2020 NBA Draft.

Bane led the state of Indiana in scoring during his senior year at Seton Catholic High School, pouring in 30 points, 11.5 rebounds and 6.1 assists per game, but was lightly recruited and not ranked in any of the major prospect platforms, per the Fort Worth Star-Telegram.

Bane ended up taking his talents to TCU, where he played four years under well respected head coach Jamie Dixon. The sharpshooter improved his scoring output each season in college, capping out at 16.6 points per game while shooting 44% from beyond the arc during his All-Big 12 senior season, per ESPN Stats.

Bane flew under the radar in the college basketball world, mostly due to the fact that TCU isn’t a basketball powerhouse and only made the NCAA tournament one year in Bane’s time as a Horned Frog. Despite this, Bane was one of the most hard working, consistent and versatile guards in the country and looks well positioned to succeed at the NBA level.

The first thing that jumps off of Bane’s stat sheet is his exceptional shooting percentage, particularly from three, making him one of the best shooters available in the 2020 draft class. Bane shot above 40% from deep all four years of college and had no issues letting them fly during crunch time.

The guard isn’t just a great set shooter, he is very good at creating his own shot with his dribble and ability to knock defenders off of their spot with his 6-foot-6 muscular, chiseled frame.

Bane also uses his thick build to get to the basket with power and force, making him a two-level matchup nightmare for more slender perimeter defenders. He attacks the rim with conviction and is savvy in his decision making once he gets into the paint area.

On the other end of the floor, Bane is a well-respected and versatile defender who is viewed as “position-less” and has the potential to guard three to four different positions on the floor, per NBC Sports Philadelphia.

Although Bane is not the most athletically gifted player, his high energy on the defensive end and the fact that he doesn’t take plays off makes him a plus defensively.

Finally, Bane has impressed teams with his maturity and NBA-ready build and attitude you typically see from guys who spend four years in college basketball.

Despite being 6-6, ripped, and very tough, Bane lacks top-end speed and explosiveness a lot of his draft counterparts possess. The guard also has a below average wingspan, making it potentially difficult to elevate over bigger wing defenders in the pros.

Bane is not going to wow anyone with his leaping ability and will have to rely more on finesse and intelligence rather than pure talent to be able to reach his full potential in the NBA.

Another knock on Bane is his lack of ability to facilitate or create for his teammates. He is a decent passer, but the fact that he doesn’t have top-end ball-handling skills or court vision, take him out of the combo guard consideration.

One guy that immediately comes to mind when looking at Bane is Sixers guard Matisse Thybulle. Though Thybulle is more slender and more athletic than Bane, both possess a similar skill set, similar limitations, and the potential to be major pluses on both ends of the floor.

Gary Trent Jr.’s name has been also been tossed around when looking at Bane. Trent has seemingly carved out a nice role on the Trail Blazers, and I believe Bane can do the same, if not becoming more of a focal point of an offense.

Going a little ways back, Bane reminds me a bit of Jason Richardson in terms of size, build, and ceiling. Richardson was far and away a better athlete than Bane, but there are definitely comparisons to be drawn there.

Fit With the Knicks and Availability

Desmond Bane’s name has came up many of times when talking about potential late first- or second-round targets for the Knicks, especially here at The Knicks Wall, and rightfully so.

Bane would be a perfect addition to a Knicks roster that has been allergic to defense and adding perimeter shooting in recent years. Bane would slide in seamlessly as a bench player at first, and could even develop into a starting guard, depending on how the roster is looking next season.

Bane’s shooting will bolster and add life to an otherwise lifeless and inconsistent Knicks offense, while his defense could form a two-headed monster on the perimeter with Frank Ntilikina.

Bane should be available for the Knicks at 27, but not at 38. It seems like many other teams could use a 3-and-D guy like Bane, especially already good teams like the Lakers and Sixers, so there will be competition.

At this juncture, based on Bane’s shooting and defensive ability, his maturity and his toughness, this is should be the number one target of the Knicks, who desperately need to find quality players tailor made for today’s NBA with the ability to contribute relatively soon.