What Are the Risks and Rewards of Knicks Nabbing Auburn’s Isaac Okoro in the Draft? 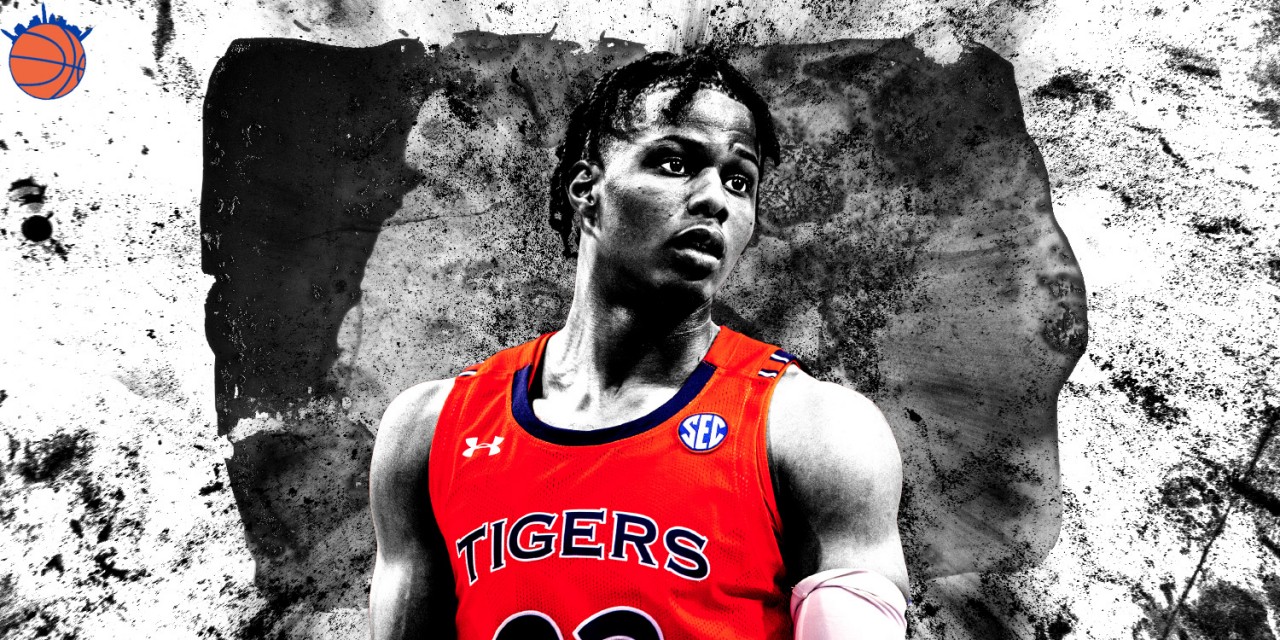 Auburn forward Isaac Okoro possesses one of the most enticing athletic projections in the NBA draft, but he just may not fit with the Knicks.

He does not have quite as high an upside as LaMelo Ball, Anthony Edwards, or James Wiseman, but when it comes to defense and athleticism, he can go toe-to-toe with just about anyone in this draft class. He is 6’6″, 225 pounds, which is the same build that Justise Winslow was listed as for the 2019–20 NBA season. Having only turned 19 last January, there is still tons of time for him to grow physically and as a player.

One of the concerns about Okoro is always a big one for the Knicks. Drafting a 6’6″ player who shot only 28.6% on threes last year and 67.4% from the line is troubling given the Knicks’ young players‘ collective inability to connect from downtown last season.

The numbers for Okoro are not great and his form, while not terrible, is nothing to write home about. He has good consistency and can get right into rhythm off the catch-and-shoot. He does, however, have a slightly dip to get into rhythm and that will trouble him on off-the-dribble threes, a problem that similarly troubles R.J. Barrett.

His mediocre mechanics and subpar three-point percentage did not stop him from making an offensive impact for Auburn last season. Okoro still averaged 2.5 three-point attempts per game. Despite his inconsistency, head coach Bruce Pearl maintained faith in the forward’s shooting all season and did not yank him for misses. He took, and made, some challenging long-distance shots.

One more Isaac Okoro footwork clip, this time with the defense closing out (and the clock winding down).

He still ended up shooting 51.4% from the field, ranking among the top-15 freshmen in the country in field goal percentage. By not refusing to shoot, he forced opponents to closeout, and used that to attack the rim with ferocity.

Such a pretty finish around the big here from Isaac Okoro pic.twitter.com/OFZn12ujW3

Okoro is not the short-term answer to the Knicks’ severe floor-spacing problems, but his mechanics and willingness to shoot indicate that Okoro will not always be a below-average shooter.

Okoro’s shot creation and playmaking are not problems per se, they’re just not his greatest strengths. Part of this stems from the fact that he was a true freshmen on a very competitive team last year, so he finished the season with a usage rate of under 20%.

While making plays happen is not what Okoro is best known for, it’s certainly something he can do when necessary. I already brought up his ability to attack closeouts, but he could also create shots off-the-dribble when plays broke down. His first step is a beauty to behold.

Isaac Okoro with a lightning quick first step past Aaron Nesmith and finishes by causing an earthquake. pic.twitter.com/s3sQnumV6X

His finishing is also supreme, which is what ultimately catapulted his field goal percentage in spite of his jump shot. He has a knack for reading and reacting after passing his defender and getting to the interior, and never shies away from an opportunity to use a Euro step.

Isaac Okoro is easily one of the best finishers in the 2020 draft class. His combination of strength and dexterity with his left hand, he's really an awesome finisher with really soft weak hand touch.

Quick video showcasing that below: pic.twitter.com/w7NYTHCjHZ

Critics will knock his 2.2 assists per game—with a total of 57 assists on 55 turnovers—but this should not be reason to waver their fidelity in Okoro’s offense. In fact, his ability to post a 116.5 Offensive Rating on a usage rate of 19.6% shows that he will be able to fit smoothly into most sets. The caveat, as is so often the case with players the Knicks tend to like, is that he needs to play next to shooting. But his ability to get to and finish at the rim should alleviate most detractions about his playmaking and shot creation.

When it comes to leaping, quickness, speed, and footwork, not only does Okoro check every box, but he is in the conversation to be in the top-end of each category for this draft class. The following two clips should tell you all you need to know about his hops:

Keep in mind, this Isaac Okoro dunk is on Oregon State 7-footer Kylor Kelley, who led the nation in block percentage (20 minute per game minimum). It was quite the introduction to NBA scouts and executives. https://t.co/WYtRmDMLlA

To showcase his speed and intelligence, here is one of my favorite plays of Okoro’s time at Auburn:

That poor soul on Alabama who ultimately gets swatted is in a full sprint as soon as his teammate gets the ball. Okoro, meanwhile, has to slow down before halfcourt to properly time his block. He pulls up slightly but lengthens his stride so that he is not in the fourth row by the time his opponent is shooting.

He is a physical specimen. That he might not be done growing should put opposing rim protectors on notice, and cause opponents in transition to always look over their shoulder.

Okoro’s biggest selling point is his defense. Before the season, his coach had the following to say about him: “He has a chance to be the best defender in college basketball. His matchup is not scoring. That’s just like, that guy’s night’s over. He can guard any position. He can guard one through five. He is quick enough to keep a guard in front of him. He is strong enough to guard any center.”

I’m not sure a coach can give his player any higher praise. He was one of only three players in the SEC to average more than 12 points per game, and total 25 steals and 25 blocks on the season.

His versatility is one of his biggest selling points. Some games he switched frequently on to bigs. Other games he shut down the opponent’s best player. He also had no problem harassing opposing point guards:

The only valid nitpick about Okoro’s projection as an NBA defender is that his wingspan (6’8.5″) might prevent him from switching onto opposing centers. Other than that, whoever winds up with Okoro will be acquiring a solid, NBA-ready defender who can tackle assignments from point guards to power forwards and any wings in between.

Okoro’s Outlook for the Knicks

If he is available when the Knicks are on the clock, the front office will have to decide if his skills outweigh his tricky fit next to core pieces Barrett and Mitchell Robinson (if both are still considered to be the future of the Knicks by draft night).

Do the Knicks want the future of the franchise to lie in the hands of three young players, none of whom have proven the ability to shoot the ball averagely? If the Knicks make offseason moves to acquire shooting, then this is a different conversation.

Let’s say they do not. Here are the career free throw percentages of Okoro, Barrett, and Robinson: 67.4% (NCAA only), 61.4%, and 56.8%, respectively. In a game that is only becoming more about spacing, this is a remarkably daunting outlook. Now, all three would be incredibly young, and there would be time for them to grow and improve—but the organization has never been known for its patience.

Okoro is landing in the 5-8 range of most mock drafts. The Knicks’ most likely outcome from the lottery is the seventh pick, though their average selection is 5.5, according to tankathon.com. Assuming things go to plan, Okoro could be the best prospect on the board, and whether he becomes a Knick or not will tell us a lot about the way Leon Rose sees the direction of the franchise.