Could Jalen Smith Be in Play for the Knicks With Their Late Picks? 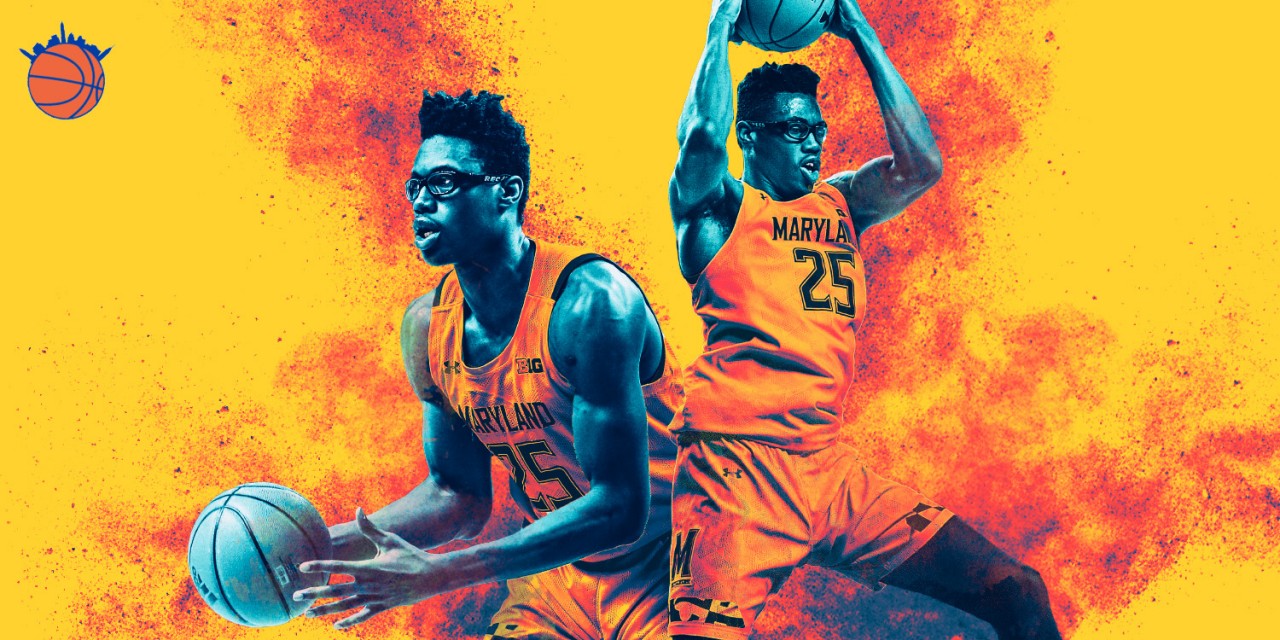 Maryland forward Jalen Smith is raw and athletic with speed and a jump shot. Let’s dive into whether he’s right for the Knicks or not at the draft.

If the New York Knicks are going to start drafting successfully, hitting on early picks is of the utmost importance. However, it’s also necessary that the Knicks take advantage of their late picks, whether it be additional first-round picks or second-round picks.

Take a look at the reigning NBA champion Toronto Raptors, who selected star forward Pascal Siakam with the 27th pick of the 2017 NBA Draft and Norman Powell 46th overall in 2015. Even their undrafted free-agent signings have been sensational, as Fred VanVleet, Terrence Davis, and Chris Boucher have all had impacts in Toronto either this season or last season.

There are many different directions that the Knicks can go with their late picks. It would make a lot of sense to take the best player available in both situations given the lack of talent on the roster. However, if the Knicks do draft based on position, and selected a lead guard with their lottery pick, it could make sense to draft a stretch four with one of there two late picks. A stretch four would be the ideal fit in the long run next to Mitchell Robinson, given that Robinson spends most of his time on the floor in the paint.

One player that will likely be available in the late first round and possibly the early second round is Maryland sophomore forward Jalen Smith. Would Smith be the ideal selection for New York? Let’s go through his strengths and weaknesses as a prospect.

If you were watching a Maryland basketball game, it’s wasn’t hard to notice Jalen Smith as one of the NBA prospects on the floor. Smith possesses NBA size and length, as he’s 6’10” with a 7’1” wingspan.

Additionally, Smith has speed that you don’t normally see from bigs. As soon as there’s a rebound, Smith takes off down the floor and is an immediate threat in transition. According to The Stepien, Smith ranked in the 99th percentile in transition offense, as he was 24-of-29 (82.8%) on those shots. The play below against Michigan State is something that you see frequently from Smith, and the finish through contact is just an added bonus:

Jalen Smith running full court in transition and then finishing through contact. pic.twitter.com/YmS08Rlv6V

Smith’s leaping ability is also above average, which makes him a threat to catch lobs on offense and a shot-blocking threat on defense.

Putting a player like Jalen Smith next to Mitchell Robinson can be pretty lethal when it comes to shot blocking.

One of Smith’s strengths is his shot. He shot 36.8% from beyond the arc this past season. For a guy who’s 6’10,” this is pretty encouraging, and he can potentially be used as a stretch four in the NBA. #NBADraft pic.twitter.com/7jNALHTRu9

While the shot efficiency is definitely there, Smith’s assortment of shots needs to increase. Most of Smith’s shots came from around the rim, or beyond the three-point range, but he rarely took any mid-range jumpers. As you could see by the play below, Smith has the ability to make these shots, even when guarded by a solid defensive player in Xavier Tillman.

Whether or not Jalen Smith can consistently score in a plethora of different ways will likely determine his status in the NBA. Here’s a beautiful mid-range jumper over Xavier Tillman. pic.twitter.com/yKr9alSoQK

If Jalen Smith can develop his game to the point that a mid-range jumper like that is a normal occurrence for him, then his stock would go up. Based on the develop we saw in his game from his freshman to sophomore season, that’s certainly not out of the realm of possibilities. Overall Smith’s shooting is undoubtedly one of his strengths as a prospect.

Long 2 off the dribble from Jalen Smith. pic.twitter.com/DUBsswVV4s

One area of concern lies in his post-up game. Smith ranked in only the 38th percentile in college basketball in post-up shot attempts (per The Stepien). He simply doesn’t have wide array of post moves, and if it hurt him at the college level while playing against smaller competition most of the time, it will definitely hurt him at the NBA level.

Several of Smith’s points at the rim came on wide open dunks or layups. If Smith can’t score in the post at the NBA level, then his ceiling likely becomes that of a role player, possibly a better shot-blocking Bobby Portis. In that case, then Smith wouldn’t be worth selecting.

Much of Smith’s problems in the post are deeply rooted in his strength. When Smith is backing down opponents in the post, he isn’t strong enough much of the time to actually get closer to the basket. Strength is an extremely underrated trait for all NBA prospects, especially big men.

In this play below, Smith has the ball in the post against Penn State’s Myles Dread, who’s 6’4″. Despite being six inches taller than Dread, Smith could barely move Dread an inch, and has the ball stripped away from him.

One of Smith’s weaknesses is his strength. Going up against a 6’4” Myles Dread in the post, fails to back him down and ends up getting stripped. pic.twitter.com/9u3Yeht4DQ

This problem isn’t only limited to the post, but it’s an issue when Smith is rebounding as well. Smith averaged 10.5 rebounds per game, but despite that number, I think his rebounding is a bit overrated. This leads into Smith’s next weakness.

Smith doesn’t use his body properly when rebounding. For a player that’s 6’10” with a 7’1″ wingspan, you’d think that anything near him in college should be grabbed. While Smith’s not a bad rebounder, he does need to clean up some of his techniques on the glass otherwise he’ll be a significantly worse rebounder in the league.

On the first play on the thread below, 6’0″ Jamari Wheeler tips a ball in over a 6’10” Jalen Smith. In the second play here, Smith has positioning against a shorter opponent, and is bodied off allowing the opponent to grab the offensive rebound and score.

Another play where Smith is outbodied vs. a shorter opponent on the boards. pic.twitter.com/qCL8mHJc0J

A very similar play happens here against Illinois, where Smith is out rebounded by shorter players twice on one play, before eventually recovering for a block. Obviously, he deserves credit for the great block, but he’s also never in that situation if he can just grab the rebound off of the first miss.

What a bizarre sequence. Jalen Smith gets outrebounded twice only to swat away the third attempt. pic.twitter.com/GzmCrQzxm8

On defense, while Smith is a great shot-blocker, there are a few plays where opponents seem to have easy layups, even when he’s contesting it. This isn’t a major concern of mine, as it’s just a lapse that can be easily corrected. However, his strength while playing defense in the post against NBA players should be a concern.

One play that does make me cautiously optimistic about Smith’s post defense is on this possession versus Tillman with the game on the line.

What a great defensive possession from Jalen Smith in crunch time. Guarding Xavier Tillman too. pic.twitter.com/NkFcG5OO4E

After evaluating Jalen Smith as a prospect, I don’t think the Knicks should use their late first-round pick on him. If he was still there in the second round, then the Knicks should consider him, but he still wouldn’t be my first choice.

In order for Smith to be a successful player in the league, he needs to go to the right team. He needs to go to a team that has a history of developing talent, and a place that he won’t be forced to play right away. It’s important that Smith not only gain 15-20 pounds of muscle but also develop a better post game.

If all those click, and Smith gets proper time to develop either in the G League, in practice, or both—then I think he could succeed in the NBA.

For the Knicks, they should be wary of taking a raw, developmental prospect like Smith. New York is a team that just needs talent right now, and the way to do that in the late first round, early second round is drafting players with higher floors than Jalen Smith.

While it wouldn’t be too surprising if Smith becomes a solid player in a few years, he isn’t the best fit for the New York Knicks.