Should Josh Green Be a First-Round Target for the Knicks? 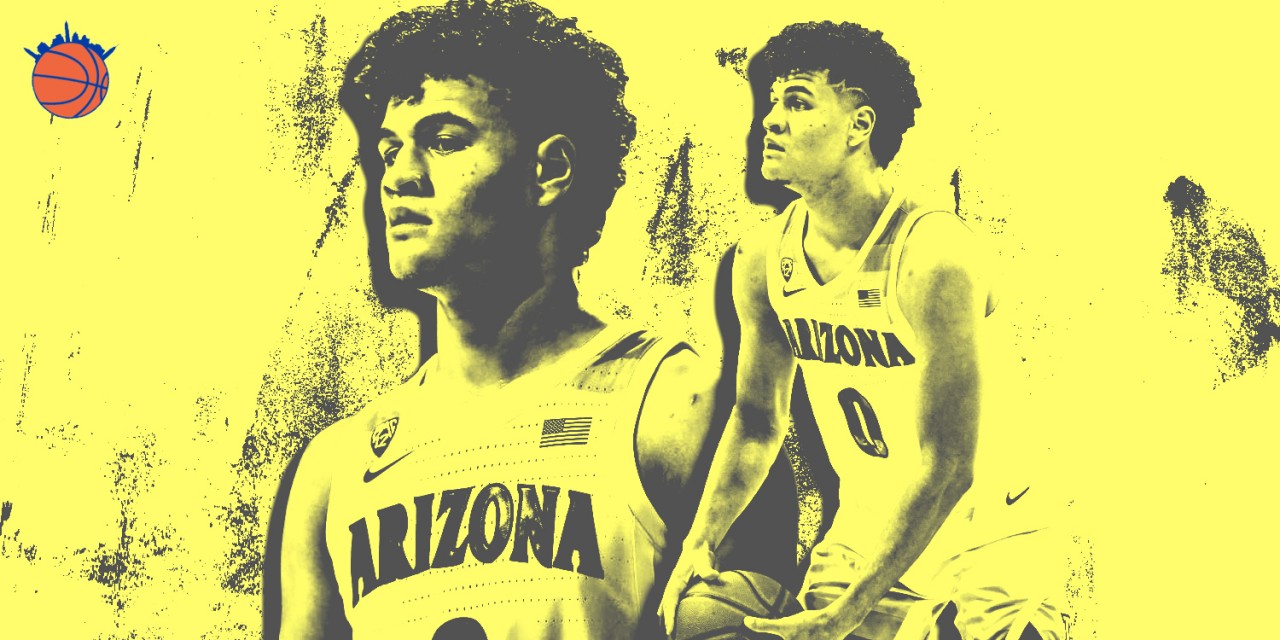 Arizona shooting guard Josh Green will be tough to nab at no. 27, but he could be available on draft night for the Knicks in the lottery.

We are officially in the offseason with the conclusion of the 2020 NBA Finals on Sunday night, and that means we are even closer to one of the most important drafts for the New York Knicks in recent memory. The Knicks hold three picks in the top 40, and two in the first round, along with plenty of future assets if they organization decides to get creative. In addition, it’s the first NBA draft for new Knicks President of Basketball Operations Leon Rose, and first under new head coach Tom Thibodeau.

There’s no need to beat a dead horse discussing the situation. We’ve had since March (the longest offseason in Knicks history) to do that. However, there is a need to continue to take deep-dives into NBA draft prospects that the Knicks could target.

One player who will certainly be on New York’s radar is Arizona freshman shooting guard, Josh Green. Green is a former five-star recruit who ranked 13th in 247 Sports’ 2019 Class Composite ranking. He started all 30 games for Arizona during the 2019–20 season before it got halted due to the pandemic.

Let’s take a closer look at his strengths and weaknesses as a player.

As it’s been mentioned before, the Knicks’ number one priority in the offseason between the draft and free agency should be acquiring three-point shooting. Josh Green brings that to the table. In Green’s one season at Arizona, he shot 36.1% from beyond the arc on 2.8 attempts per game. While that’s not at the level of a guy like Desmond Bane, it’s still definitely above average.

Another one from Josh Green. Even though it's less pronounced it's still noticeable.

Love the movement 3 with the quick set, balance (even with the funky lower body), and release. pic.twitter.com/xP3DcAyJbS

Green is 6’6” with a 6’10” wingspan, which is great size for a shooting guard. With the NBA trending more-and-more towards position-less basketball, you can categorize Green as a wing. Furthermore, Green possesses speed and leaping ability that makes him a solid rebounder and absolute nightmare for opposing teams in transition.

Green ranked in the 82nd percentile in transition offense, shooting 61.4% from the field on those type of plays. With the speed and athleticism Green has, it’s easy to see why.

Josh Green is incredibly fast in the open floor. Free-throw line to basket in 3.5 seconds: pic.twitter.com/YOA5siGaXe

Green is the type of player who will test off-the-charts in the NBA’s draft workout process. As a result, it can certainly move him up draft boards.

Green’s size and athleticism help him to be a great defensive talent. This past season, Green ranked sixth in the Pac-12 in steals per game with 1.5. He also ranked fourth in defensive box plus/minus, which was at 4.1.

Watch this defensive possession by Josh Green. Picks up the ball handler a solid 60+ feet away from the rim, plays well off-ball, then blocks the shot (no official block, so at the least heavily contests the shot). Peep score & time- incredible on-court motor pic.twitter.com/F1XdRjJBwr

The clip above displays Green’s on-ball defense, but what’s also impressive is his overall team defense, as shown in the second clip below.

Outrageously good rim rotation by Josh Green. Not just recognition and situation, but in-air contortion to adjust to the reverse attempt and block with his off-hand. Amazing defensive performance from Green pic.twitter.com/0WFsFxpxUF

One major difference between college and NBA is the speed of the game, and speed of the opponent. Undoubtedly, Green should have a smooth transition with the jump from guarding college players to guarding NBA players. If Green is able to crack an NBA rotation at some point during his rookie season, it’ll probably be because of his defense.

It doesn’t show up much on the stat sheet since his usage rate isn’t sky-high, but Green’s passing is exceptional. Not only does Green often make the right pass, but he also has creative ways of getting it done in situations where it isn’t easy.

In the play below, Green steals the inbounds pass, and instead of turning around and trying to dribble the length of the court, he quickly tosses it down to Nico Mannion leading him to an easy layup. It even looks like he puts some spin on the pass to make it easier for his teammate.

Awesome sequence from Josh Green. Intercepts the inbounds pass then fires a dime to Nico Mannion for the score pic.twitter.com/VL2nakJHn3

Creative passing isn’t something that Josh Green does once in a while; it’s all the time. It doesn’t matter if he’s in the air or on the move, Green will get the ball to the open man (S/O to @MavsDraft for the great video work in the clip below).

I think Josh Green is a generational mid-air passer. I've never seen a college freshman make the passes he makes on the move. Worth the 105 second video. Also a dynamic defender. Still my #1 choice for the Mavs at 18. pic.twitter.com/9P9lP9caiJ

The pace of the NBA is trending faster and faster each year, and having a player who is good in transition—whether it be scoring or passing—is extremely valuable.

The kryptonite of the players the Knicks’ have drafted in recent years has been efficiency. It’s been discussed with Frank Ntilikina, Kevin Knox, and R.J. Barrett, New York’s last three first-round picks. It’s extremely important for the Knicks to draft players who proved they can be efficient in college. Green’s efficiency during the 2019–20 season wasn’t great at all.

Green shot 42.4% from the field, with a True Shooting percentage of 52.8. While both of those numbers aren’t good, Green’s 36.1 three-point percentage, as well as 78.0 free throw percentage are good. Moreover, Green shot over 50% from the field in 10 of his 30 games. Five of those came in the final six games, which shows improvement in shot selection and shot making ability as the season waned.

However, a main concern with Green is his ability to finish at the rim. Green ranked all the way down in the 12th percentile in shots around the basket and shot 37% on attempts at the rim. This is going to have to improve tremendously in order for his overall efficiency to be better.

Another area of concern is Green’s jump shot, ranking only in the 34th percentile. He only made 29 of his 98 jump shots, which was 29.6%. Despite Green’s struggles in this area, I’m confident that it’ll improve, as he’s still only 19 years old.

Green isn’t the type of player you’re going to see create his own shot much. This is much in part due to his handle, which isn’t very good. He only ran nine isolations plays last season, converting on only two of them.

If Green wants his role in the NBA to be more than just a 3-and-D player, then this is going to have to improve, otherwise his ceiling could be limited.

Josh Green is the type of player who can sky up draft boards once he completes in-person workouts with teams. As result, it wouldn’t be surprising to see him sneak into the backend of the lottery.

In terms of the Knicks, Green isn’t a guy they would take with the eighth pick, and you can expect him to go before pick 27. However, if Green were to fall to no. 27, he’d be at or near the top of my list for the Knicks. New York will likely only be in line to draft him if they trade down from pick no. 8 or up from pick 27.

The one hesitation with Green is that he will end up being a better player if drafted by a playoff team, which would allow him to sit on the bench and develop. With the Knicks, Green could end up playing big minutes early in the season, ultimately hindering his offensive development. That being said, it wouldn’t stop me from taking Green if I’m the Knicks—the organization just needs to develop him correctly. Also, we know that Tom Thibodeau loves athletic defensive wings, so Green can potentially fit in well with the system.

I ultimately think that Green turns into a solid role player in the NBA, with a ceiling much higher than that due to his combination of size, speed, and overall athleticism. Green is also only 19 years old, which gives him plenty of time to improve his offensive game. If the Knicks decided they want to select a young player with tremendous potential in the middle-to-late first round, Josh Green could be their guy.

»READ: Patrick Williams is modern basketball. The Knicks could select him at 8.