Is LaMelo Ball the Ideal Outcome for the Knicks in the 2020 NBA Draft? 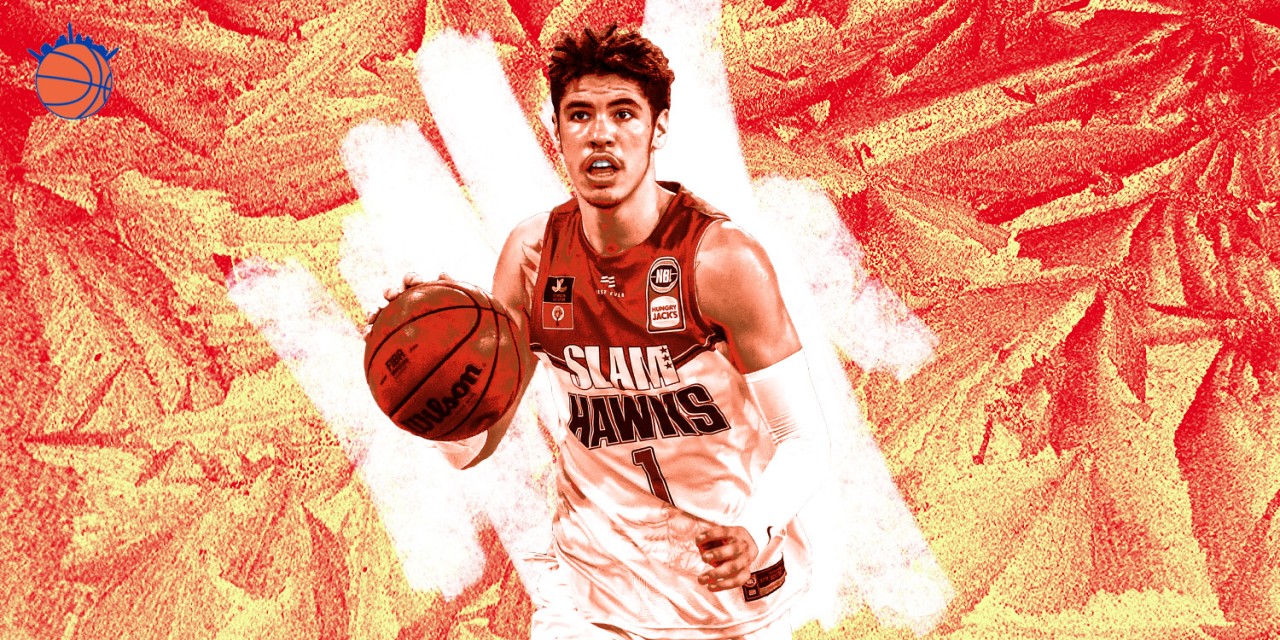 LaMelo Ball is already linked to the Knicks with his outspoken father, but the youngest Ball is a baller in his own right—perhaps the best point guard in the draft, too.

It has been years since the New York Knicks landed a franchise-altering player in the NBA Draft. In 2009, the Stephen Curry was drafted a pick in front of the Knicks, who ultimately ended up with Jordan Hill. In 2015, it finally looked like the Knicks had selected that franchise player in the draft in Kristaps Porzingis, only for an ACL injury and dispute with the team to later resulting in his unceremonious trade in January 2019.

Last year, the ping pong balls weren’t friendly to the Knicks; they got the third pick in a draft with potentially one of the best top twos of all time in Zion Williamson and Ja Morant. While R.J. Barrett has potential, he did struggle in his rookie season, so it’s too soon to truly get a read on his long-term value for New York.

Now enter the 2020 NBA Draft, a draft that’s one of the weakest we’ve ever seen. People are questioning whether there are any franchise-altering players in this draft or not, and it’s still unclear who will be selected with the No. 1 overall pick.

One player that’s a candidate to be selected first overall is LaMelo Ball. People know LaMelo as the son of LaVar, brother of Lonzo, and as the kid who once scored 92 points in a high school game before being pulled to play professionally in Lithuania at the age of 16. Due to professional experience and the release of his shoe through Big Baller Brand, Ball was ruled ineligible to play at the college level, and instead played this past season with the Illawarra Hawks of the National Basketball League in Australia, where he averaged 17.0 points per game, 7.6 rebounds per game, and 6.8 assists per game.

The main question is if LaMelo Ball is truly deserving of the No. 1 overall pick, or is just hyped up because of his last name. Let’s dive into his pros and cons, and if he should be the Knicks’ pick if they get lucky in the lottery.

LaMelo Ball is the consensus best passer in the draft, and it’s not even close. Ball averaged 6.8 assists per game on the worst team in the National Basketball League. On any NBA team, where he’s going to be surrounded with much better players, it wouldn’t be surprising to see him averaging 7-8 assists per game in his rookie season, and 9-10 assists per game at the peak of his career.

Spencer Pearlman of The Stepien said on a segment with SNY’s Ian Begley: “[LaMelo Ball’s] the best passer in the draft, he makes some of the passes that you see the Lukas and the Traes make. His vision is absurd.” After watching Ball, it’s clear that he’s in the tier of Young, Doncic, and Morant when it comes to passing ability at the time they entered the league.

– splits PnR with hard plant and behind back dribble
– gathers possession again
– perfectly placed pass to big (with flash, WHEW)

Behind the back passes, lobs to big men, full court passes, cross-court passes, it doesn’t matter. LaMelo Ball can do it all.

LaMelo Ball’s passing is insane. Best passer in the draft and it’s not close. #NBADraft pic.twitter.com/ZOPhzZkQyG

Additionally, if Ball were to be the Knicks’ point guard, the front office would need to build the offense with shooters surrounding him. This would be the start of putting together a new offense in New York.

Usually when I’m running through pros and cons for different players, creativity isn’t one of them. However, that’s the only word I was able to think of while watching Ball. He does some things on the court that you just can’t teach.

It doesn’t matter if there are opposing players between Ball and the basket—he’ll somehow find a way to get to the hoop, whether it’s an up-and-under or hesi.

The hesi to get by the defender into using his creativity/length to finish the and-one. Beautiful from LaMelo. pic.twitter.com/6CLOOwMKNr

Furthermore, Ball is creative with his handle as well. While he relies a little too much on crossovers (that don’t always work), he does utilize spin moves and behind the back dribbles as well. Ball needs to add some moves to his repertoire, but because of his creativity and instincts on the court, he shouldn’t have any problems learning or perfecting them.

One of LaMelo Ball’s biggest weakness is his shooting, but if he could hit this consistently, he can be an all-star caliber player. The dribble move is ridiculous too. #NBADraft pic.twitter.com/1kjPQaWDEX

LaMelo Ball is listed at 6’7″ and, while his wingspan hasn’t been officially measured, many seem to think it’s a few inches greater than his height. You don’t see many 6’7″ point guards anymore, and that’s one of the reasons I think Ball is so interesting. His tall point guard style of play has drawn comparisons to a Shaun Livingston pre-injury.

This size and length is what allows Ball to make some of his crazy passes, or maneuver around the rim for some creative finishes. Additionally, it helps him rebound, as he averaged 7.6 rebounds per game. This allowed Ball to record two triple-doubles in his final two NBL games: he had 32 points, 13 assists, and 11 rebounds against the Cairns Taipans and 25 points, 10 assists, and 12 rebounds against the New Zealand Breakers.

To give you an idea of how impressive this is, at the time Ball recorded his first triple-double, it was just the second NBL triple-double in the last four years. Triple-doubles don’t happen in the NBL.

Great speed here from LaMelo. Other than that just thought this was a funny play. pic.twitter.com/XEeFNSgACZ

One major area for concern with LaMelo Ball is his shooting, which was frankly pretty atrocious in his 12-game stint in Australia. Ball shot 37.5% from the field and 25.0% from beyond the arc. According to The Stepien, Ball’s jump shot percentage ranked in the 27th percentile and dribble jumper ranked in the 34th percentile. A positive is that he ranked in the 67th percentile in catch-and-shoot situations.

While the shooting numbers for Ball were poor in Australia, it’s important to keep in mind that this was only a 12-game sample size for a player who was jumping straight from the high school level to the pro level. In addition, Ball’s shooting improved tremendously throughout his 12 games in the NBL.

Ball also showed flashes of being a good shooter during his inconsistent 12 games. For example, he shot 11-of-20 from the field and 4-for-7 from beyond the arc in his second-to-last game, and followed it up by shooting 10-for-28 from the floor and 1-of-11 from deep in his last game. The shooting woes for Ball are certain, but I don’t think it’s a big enough sample size to determine truly how good of a shooter Ball is.

If LaMelo Ball can reach a point where he can hit this consistently… pic.twitter.com/0LULbikATO

One additional concern with Ball’s shooting is his low release point. This could lead to him getting more shots blocked in the NBA. It’ll be interesting to see whether or not he ends up changing his release like Lonzo did, or if he sticks with it.

LaMelo’s handle isn’t bad at all, but he needs more dribble moves in his repertoire. Couldn’t create any space here. pic.twitter.com/gKhTtxZIWy

Ball’s defense isn’t great, and you can tell that he isn’t used to playing much defense at all. On many defensive possessions, Ball was stuck with the offensive player who was standing in the corner rather than the ball handler, and that was without of doubt done due to his poor defense.

However, Ball’s defense reminds me a bit of Ja Morant’s going into last year’s draft. Morant’s defense wasn’t good, but his phenomenal offense game outweighs the negative on defense. Additionally, Ball does have the size, length, and athleticism that will allow him to develop on defense, more so than a guy like Morant.

I don’t worry too much about Ball’s defense because of this. If he’s being coached by Tom Thibodeau, which seems likely if Ball becomes a Knick, I would worry even less about his defense.

LaMelo Ball is the franchise-altering point guard that the Knicks need. He’s a player who will make everyone on the team better with his lights-out passing, and has a chance to be a multiple-time All-Star if he can become more efficient and shoot better. The shooting isn’t much of a concern to me due to the fact that it’s only a 12-game sample size, and Ball also shot 72.3% from the free throw line. That free throw percentage is just about average, but it’s a good indicator to show that he’s likely to develop a better three-point shot.

Even if his shooting were to not develop to a great extent, Ball is still a player who can make his teammates better due to his passing, and be a positive on the floor. He’ll also rebound well, and hopefully turn into a formidable defensive player due to his physical attributes.

Ball’s ceiling is extremely high, probably the highest in the draft, and one of the main reasons why is not only his size, length, athleticism and overseas production, but also because of how effortless everything he does is. He makes everything look effortless, and you get a sense that this is a guy who has so much raw talent that hasn’t been coached up yet. If the Knicks are able to draft Ball, there’s no question there will be some frustrating performances at the beginning due to that raw talent, but there will also be some extremely good performances.

Ultimately, the Knicks are likely going to need to be selecting at No. 1 or No. 2 overall to get Ball. If LaVar Ball can truly speak things into existence like he did with Lonzo to the Lakers in 2017, then it may just happen.

LaVar Ball picks where he’d want LaMelo to go No. 1 overall: "It's time for something good to happen to the Knicks." ? pic.twitter.com/AHTy8Q4iTa